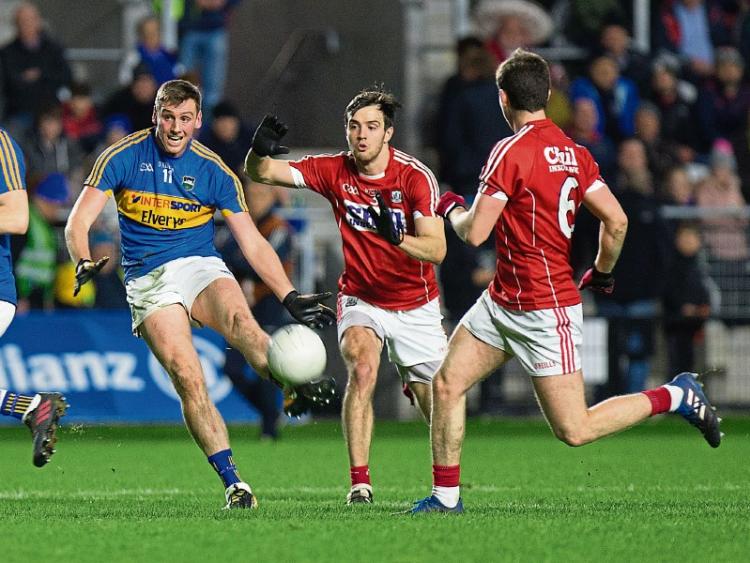 Conor Sweeney is the new Tipperary senior football captain for 2019. Seen here in action against Cork in the opening round of last year's campaign when Tipp defeated 'The Rebels' at Páirc Uí Chaoimh.

Tipperary senior football manager Liam Kearns has announced his 40-man panel in preparation for the National Football League which begins for Tipperary on Sunday, January 27, 2019 with an away game to Meath in Navan.

The panel has been freshened up somewhat this time round with the inclusion of quite a number of new faces including Paul Maher (Kilsheelan/Kilcash) and Paudie Feehan (Killenaule) who were both part of the Michael Ryan’s senior hurling panel this year. Maher and Feehan already have brothers on the panel, Bill and Jimmy, respectively.

Paul Maher was a member of the Tipperary under 21 football team beaten in the All-Ireland final by Tyrone in Parnell Park, Dublin in 2015.

Conor Sweeney (Ballyporeen) has taken over the role of team captain from Robbie Kiely; while the vice-captain’s role goes to Alan Campbell who captained his side Moyle Rovers to the county senior football title last month.

Tipp's programme of games is as follows: Meath (away), Fermanagh (home), Donegal (home), Armagh (away), Cork (home), Kildare (away) and Clare at home in their final game on Sunday, March 24.

The full panel is as follows:

Clonmel Town to face Dublin side in FAI Junior Cup