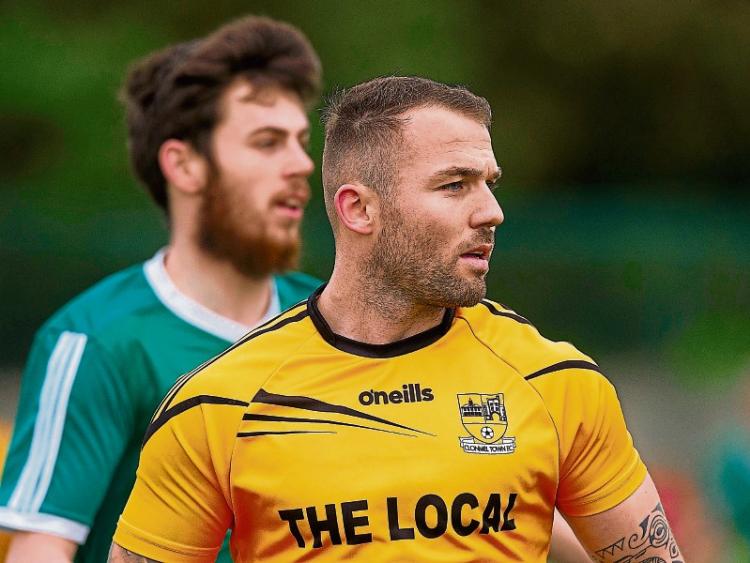 Evan McGuire who scored Clonmel Town's third goal with a fine low finish from the edge of the area against Bansha Celtic on Sunday last.

Clonmel Town ran out deserving winners of this highly anticipated Cup game as they dominated the first half and had a well worked out game plan to stifle the Bansha Celtic midfield and attack.

The game was only four minutes old when the visitors took the lead, after a cross came to the back post and Craig Guiry managed to turn his marker and blast in from eight yards out.

Town kept the pedal down and doubled their lead twelve minutes later when a quick break down the right ended with a low cross into the box which the on rushing Guiry was able to turn in for his and his side’s second.

The third goal from the visitors came from a miss placed goal kick that was pounced on in midfield and a fine low finish from Evan McGuire from the edge of the area ended in the shell shocked home side’s net.

The game was as good as over but credit to Bansha Celtic they came out more organised in the second period but the chances they created came to nothing mainly thanks to good defending and goal keeping by the visitors. When they were reduced to ten men on the hour mark their day was as good as over, and it was the visitors who were to score final goal of the game 13 minutes from time when Dylan Guiry pounced and gave the home keeper no chance.

The winners now have a trip to Dublin to look forward to in the 5th round, while Bansha Celtic will lick their wounds and concentrate on finishing as high as possible in this year’s Premier League.

Peake Villa’s first team made the short trip to North Tipperary to take on Moneygall FC in the FAI Junior Cup, on Sunday last, and came away with a victory that once again sends the Thurles side into the Open draw of the competition.

Villa started brightly and were out of the traps quickly taking the lead in the sixth minute when Pippy Carroll split the Moneygall defence and Tommy Teer was on hand to calmly score in the bottom corner.

The visitors should have gone two up shortly after when Keith Cahill got in but his shot was well blocked by the Moneygall keeper.

The game was stop start after this with not many real chances, and it had to wait until six minutes before the break before Pippy Carroll headed to the net to give his side a deserved two goal lead at the break.

The second half was all Peake Villa and they made it three ten minutes in when Evan McCormack scored after a goalmouth scramble.

In the 65th minute Darren McGuire made it 4-0 when scoring from a header close in, and the fifth came two minutes later when Kieran Hennessey scored with a sweet volley to the bottom corner.

The visitors were on a goal scoring frenzy during this spell getting their sixth in the 70th minute when a great cross from Maris Baltins was met by the head of Pippy Carroll who scored found the net again, and they finished off the scoring three minutes from time when Tommy Teer broke through and made it seven, his second of the day, and a goal  which was fully deserved for his  overall contribution on the day.