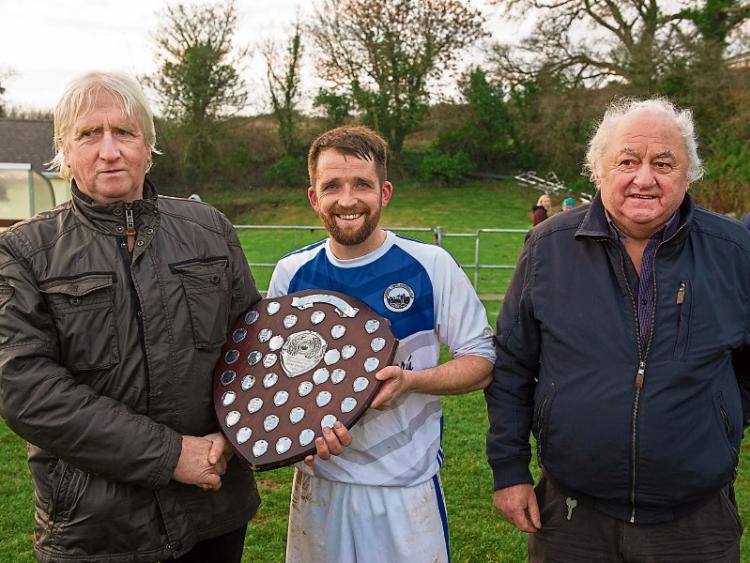 Cashel Town’s first team picked up their first silverware in nine years when they came from behind to beat a brave but limited Kilsheelan United team at Palmershill on Sunday in front of a good sized crowd of supporters who braved the cold by dry conditions at Palmershill.

The teams spent the first minutes of the game testing each other out in the midfield areas without producing anything of note, but the visitors took the initiative in the 15th minute when the Cashel defence were unable to deal with a cross from the left which was flicked on by Eddie Sweeney into the path of Jamie Cronin to slam home from close in.

This rattled the home side and ten minutes later they almost found themselves two down when Sweeney blasted over a half volley from the edge of the area.

This seemed to wake Cashel up as in the next five minutes they created a number of solid chances. Firstly James Harding split the Kilsheelan defence with an exquisite through ball to Niall O’Brien who fired wide when it seemed easier to score.

And minutes later Stephen Mc Grath did well in the visiting goal to parry away a shot by Brendan Ryan. But the pressure kept building and nine minutes before the break a corner kick was punched out by the United keeper only to be returned into the danger area by veteran Derek Hayes and Cashel striker Eoin Byrnes twisted in the air to nod a ball into the corner of the net for the equaliser.

Cashel were completely on top at this stage and almost took the lead in the final minutes of the half when it took desperate goal line defending to keep Harding and Byrnes out.

It finished 1-1 at the end of the half but the Cashel front men were not to be denied and seven minutes into the second half combined brilliantly to put Cashel in front. A ball was played through the middle of the pitch and when it was passed to Harding he laid in on a plate to his partner to fire low to the corner and put his side ahead.

Ten minutes later Harding got the goal his performance deserved when he took a ball past three defenders before beating the keeper all ends up with a powerful shot to the bottom corner.

At this stage it looked like it was going to be a big win for Cashel but to their credit Kilsheelan kept fighting and almost got a second goal that would have made the final minutes a little less comfortable for the home side. But Cashel held on to great celebrations in a club that should really be playing at a higher level and now looks like they are on the way back there.

See this week's issue of The Nationalist for further coverage