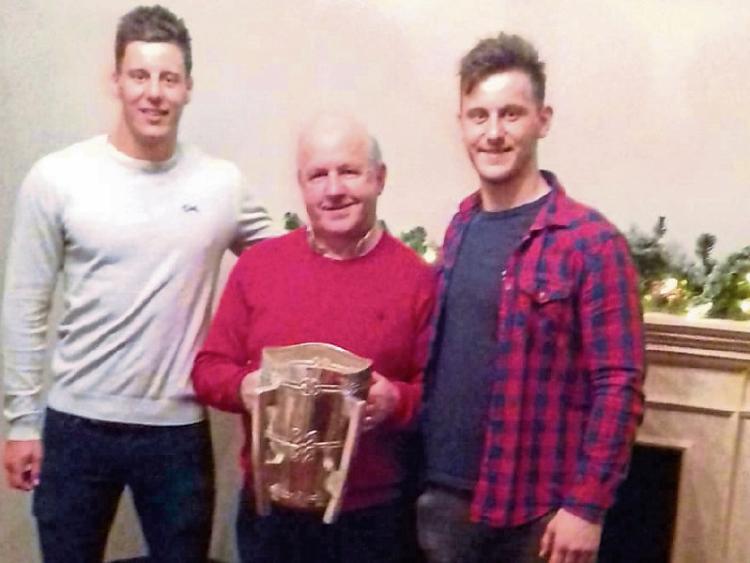 It’s the last Saturday before Christmas and I’m invited to Farranamanagh, just outside Cashel, for the Morrissey family get-together.

It’s become an annual gathering of the clan to remember their late parents, Paddy and Hannah, both of whom have December anniversaries.

This gathering, however, is extra-special. Last August two of the grandchildren, Dan and Tom, played pivotal roles in Limerick’s historic All-Ireland win. For this weekend at least Farranamanagh turns green as Liam McCarthy accompanies the lads on a visit to the old homestead.

I’d visited Paddy here almost 20 years ago but much has changed in the meantime. The house has been tastefully renovated and on this night it’s festooned with green and white bunting – a sort of Limerick oasis in the shadow of the Rock of Cashel.

The family may have deep Tipperary roots but there’s understandable pride in the achievements of the two lads from Ahane.  Tommy, my old school mate from Cashel CBS, probably epitomises it best. Unapologetically he admits to supporting the nephews by donning the green jersey (literally) of Limerick from the start of the season. He terms it “total immersion” and for good measure adds “you follow the blood line”.

There are no half measures here – the Morrisseys don’t do things by halves. There’s a feistiness in the genes that regularly finds expression, whether it’s Donal (father of Tom and Dan) being outspoken in his role as Limerick County Board treasurer; Tommy as a former Progressive Democrats politician in the nineties and early noughties, or the two lads pelting defiance at the presumptions of the hurling world.

Limerick weren’t meant to win this All Ireland – or so went conventional wisdom. Too many seasons of failed promise, too many let-downs, too many accumulations of scar tissue seemed to leave the patient beyond cure. Neutrals had become dismissive.

In a season of high drama you could pick any number of key moments or tipping points where the year’s fate was signposted. For me, however, the Kilkenny quarter-final was the game- changer. This was the day when the hurling world saw new possibilities emerge - and the Morrissey brothers were at the core of it all.

Remember Limerick hadn’t beaten Kilkenny in a championship game for 45 years and that gap seemed destined to extend another year, at least, when Richie Hogan hit the game’s only goal to put Kilkenny two-up with less than ten minutes to play.  What happened next? From the puck-out Tom Morrissey grabbed possession and pointed. It was an act of defiance, a refusal to follow the lead of history.

Shortly afterwards the game went into injury time with the sides deadlocked, and every ball contested as if life itself depended on it. A minute over time Kilkenny launched a high ball towards the Limerick goal but the backs coped comfortably with the threat. In the past a clearance would have been hastily belted downfield but Limerick had found a new composure now. The ball was worked out of defence, Diarmaid Byrnes finding Tom Morrissey who had tracked back to the right wing back spot. What followed was season-defining.

Again a long clearance might have been the choice of many followers but Tom Morrissey saw space – lots and lots of uninhabited space. He set off down the right flank with James Maher in hot pursuit. Like hare and hound the chase continued for 70/80 yards. Then a little shimmy by the forward and a fade to the right created enough scope to evade the hook before the ball flew over for an outrageous point. Aaron Gillane followed with a free and history was made.

Tom Morrissey would score 1-27 over the span of the championship but that point was the most precious of the lot. Afterwards he was nominated for man-of-the-match but it was brother Dan who got the nod. The wing back had turned in a colossal shift over the 70-plus minutes - his stats on the day were off the charts, with 22 possessions. The sheer quantity of input by the wing back trumped the moments of brilliance by the forward. Between them they’d down-faced history – that Morrissey feistiness once again.

Dan, one senses, is the quieter of the two but his input to this All- Ireland was immense. Such was his consistency that he was the only Limerick outfield player to play every second of every championship game. I’m told an interesting anecdote about Dan. He marked Loughmore’s Evan Sweeney in an intermediate game some years back. Unknown to him at the time he was marking his second cousin. The Sweeney connection comes through their late grandmother, Hannah Callinan from Thurles.

In the great beyond I’m sure their grandfather applauded their deeds this year. Paddy Morrissey was a native of Bishopswood, near Dundrum, and remained a loyal Kickhams man to the very end. Among older generations in the club he was revered. As a corner back he won West medals with Kickhams in 1946 and 1947. Those teams included Peter Browne, great grandfather of Ger Browne from the present Tipp panel.  Isn’t it strange how paths cross and criss cross.

From 1941 to 1951 Paddy Morrissey served as secretary of the Kickhams club. There’s that marvellous photograph from the 1949 county final in Thurles when Kickhams played Borrisoleigh. In the pre-match parade Paddy Morrissey holds an umbrella over Kickhams’ captain Paddy Furlong, with the rest of the team in a line behind. It was the club’s only appearance in a county senior final and it was an unhappy one, losing heavily to a team captained by Sean Kenny. That lack of a county title remained an irritant for Paddy to the end of his days.

Back in Farrnamanagh last week the talk switched to Paddy’s son John Joe, who won a West senior medal with Cashel K.C. in 1980. They beat Sean Treacys in a final that went to a replay and then extra time before the King Cormacs prevailed.  John Joe played centre forward on a side that included Peter O’Sullivan, Cormac Bonner and Pa Fitzell.

Not to be outdone by her famous cousins, John Joe’s daughter, Katie, brought her own piece of silverware to the gathering. She’s the 2018 Irish Junior (U-18) tennis champion following her victory at the Fitzwilliam Lawn Tennis Club last August. Three years ago she was the U-14 champion and seems determined to pursue the sport into the future.

West Tipperary is hardly a hotbed of the sport, which makes her achievements all the more remarkable. Next year she’ll have to juggle the Leaving Certificate with the defence of her title and all the commitment that that entails. Being a Morrissey I’ve no doubt she’ll give it some lash.

For the Ahane lads, 2019 will present particular challenges too but these guys are high achievers on and off the field. Their dad, Donal, is an accountant by profession and they’ve both followed that particular money trail in their careers.

Dan is specialising in taxation and Tom is following the same line, at present doing his masters. Incidentally Tom is a half twin; the other half, Paddy, has worn the Limerick jersey at underage level but seems more laid back about it all than the brothers.

This week Dan and Tom head off on their team holiday to Los Angeles and then on to Cancun in Mexico. Once home league preparations rev up so it will be back to the treadmill for another season.  They’ll probably play catch-up initially with other counties but I can’t see that being a major issue. These lads are in formidable shape. Standing for a photograph between the pair I felt like a Christmas elf sandwiched between two latter-day titans. And then Dan reminds me that he’s not even the biggest on the Limerick half back line; at 6’3” he’s an inch short of Diarmaid Byrnes. As for Tom, his 6 feet frame leaves him five inches shy of both Kyle Hayes and Gearoid Hegarty on the half forward line.  It’s scary.

Their uncle Tommy won’t be travelling on the team holiday but he’s been everywhere else in their corner this year, including the Fenway Classic in Boston and the All Star awards. Dan captured an All Star statuette but Tom lost out on a very competitive half forward line.

My sources tell me that the half forward line drew most debate with the panel of selectors. The final place was a contest between Tom Morrissey, T.J. Reid, Pat Horgan and Daniel Kearney. The Limerick man was unlucky to lose out to Horgan in the end but that was hot competition.

What strikes me most about these lads is how unaffected they seem to be after such a momentous year in their lives. And that impression chimes with the widely-held view that this Limerick team generally has handled itself remarkably well since August 19 last. They’d have been forgiven for getting just a little carried away but, on the contrary, they seem amazingly grounded. And that’s bad news for other contenders in 2019 - including Tipperary.

Anyway it was a pleasure to be in Farrnamanagh to meet the gang and my thanks especially to Sheila for the invite. One regret was that a short interview I did with the two lads and Katie somehow got erased from the tape. I was disgusted because it would have been nice to embellish this piece with a few apt quotes, especially since all three are very articulate.

Unlike Tommy I won’t be wearing the Limerick jersey in 2019, but If Tipperary are not in contention I would have no hesitation in willing these lads on to more success.