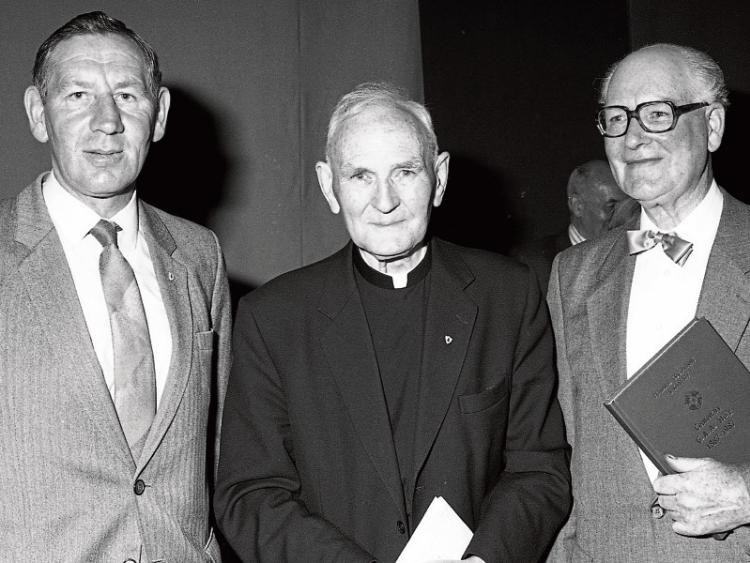 The late Monsignor Christopher Lee, who served in parishes in County Tipperary and County Limerick, and who died on March 15, 2004, is remembered in this piece as he reminisces Fethard GAA in 1987.

Monsignor Christopher Lee was a former curate and Parish Priest in Fethard and described as a pastor, scholar and writer. Greatly influenced by his father’s interest in all aspects of Gaelic culture, Monsignor Lee was synonymous with the GAA and in particular the clubs in the parishes in which he served. He once remarked that all games were good, any game is better than no game, but the best of games for Irish boys and Irish girls are the Irish games. The following interesting notes relating to Fethard GAA for their Centenary GAA Story 1887-1987 are recalled from his time served in Fethard.

Outside the country people generally associate hurling with Tipperary. Most are not aware that gaelic football is the predominant game in the area of South Tipperary stretching from Emly in the west to Grangemockler in the east beyond Slievenamon. It was the game played in my own native Glen of Aherlow. That Tipperary plays in Group III of the National League may be part explanation of why people in other countries are rather vague about Tipperary football.

Football and hurling have had a kind of seesaw history in my life (with a short spell of Rugby thrown in for good measure while I was at secondary school). When we were students in Maynooth football and hurling were the games that mattered. There was keen competition for the championship between the various years’ classes and considerable rivalry in the league games as well. (I was lucky to win a football league medal on a team captained by archdeacon Coady, Clonmel, native of Grangemockler)

My first appointment as curate was Knockainey, Co. Limerick. There it was all hurling, and I could not but become attached to it, particularly as the captain of the parish junior team played a creditable part in Limerick’s Senior all Ireland victory in 1940. (I used to tell the boys that I’d cheer for Limerick against every team except Tipperary!)

Then in 1942, I was changed to Fethard where I soon came to hear of the Parish’s great football tradition. The club was justifiably proud of it, and the teams were determined to uphold it. The memory of the challenge to any club in Ireland was very fresh as was the memory of the game with Ballinasloe. That year in preparation for the South and County Championships a parish league was now run. It was an ideal way of training, and Fethard won both trophies.

The following year Fethard won the south again. World War II was raging and travel to far away games presented many a problem. Traps sidecars and bicycles were bought very much into use, with the odd charcoal burner car on occasion. My father, a great follower of football, travelled on a sidecar to see Tipperary play Cork in Fermoy all the way from Aherlow. He died a couple of weeks after having been in Croke Park for the 1944 Football final.

I became quite attached to the football, even so far as to remonstrate with Brother Albert Small over his preference for hurling for the boys in the secondary school, which he had opened in 1941. It was hard to blame him, he came from Borrisoleigh parish. Besides, Coolmoyne Hurling club was in the parish and a number of the footballers played hurling with that club and vice-versa. Brother Albert was very proud when Liam Connolly was on an All-Ireland winning team, and when boys from the school won places on Tipperary Minor Hurling teams.

The swing to hurling came again for me in 1949.  I was changed to Thurles, and at the end of the year I found myself chairman of the famous Sarsfield club. The golden era of Tipperary hurling was round the corner. One couldn’t help becoming an ardent follower of the game, with the Sarsfields winning many county Championships and the county, a number of All Irelands. Yet I was able to get to most of the games Fethard played in the South and County competitions and be glad when victory came Fethard’s way.

In 1960 I was transferred back to the Fethard Parish as P.P. in succession to Canon Ryan, who had been my P.P. as Curate. The see saw had come down again on the football side, for, though camogie and hurling had made good strides, football still rules supreme. In the mid-sixties, the under 21 footballers won three County Championships in a row. A number of he players went on to become really good senior footballers and play their part in the occasional senior success with a little better luck in Fethard could have won more often. It was grand to find that the sportsfield, once the parade of ground of cavalry of the British Army, had become the property of Fethard G.A.A. and had been improved so greatly that it was a favourite venue for championship games.

Finally, in 1974, when I was transferred to Cashel, the seesaw came down on the hurling side, but not completely so. There is considerable participation in Football in the Caiseal Ri Cormac Club. Our local Leahy Park, kept in excellent condition, is a favourite divisional and county venue. Fethard have played there quite often and won quite often to, though not as often as they should or some of us would have wished. As the years go by, teams and matches tend to become confused and to be telescoped together in one’s memory. It will be grand to have them separated again and recalled in detail of names and venues and dates, with accurate results of who won and who lost. In the long run it matters little who won and who lost, so long as the games were played with manliness and honour. That was the spirit in which the Fethard members played for the Club. May they always do so. May the account of Fethard’s varied activities of GAA sportsfield down the years since 1885 be of great interest to Fethard people at home and in exile.

Catch up with all the sports news from Tipperary on TipperaryLive.ie