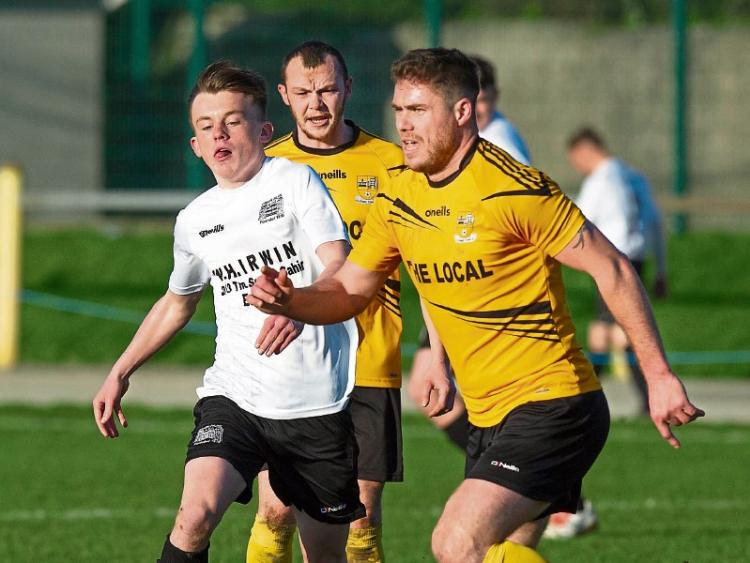 Cashel Town maintained their relentless unbeaten run in this year’s Division Two, and secured promotion back to Division One at the first time of asking when they dug out a determined victory over Kilsheelan United at the windswept Palmershill on Sunday last.

These two sides met earlier in the year in a Shield final and the visitors scored first on that occasion, but the home side were determined to get off on a better foot this time and did so when they took the lead in the fifth minute courtesy of a David Butler strike from a James Harding cross.

Harding was having a fantastic game and was always a threat to the visitors, and he set up the second goal 12 minutes later when he picked out David Hall to finish from close in and put Cashel well in control.

After that the game turned into a bit of a midfield slog with tough weather conditions making it difficult for either side to play any kind of fluid football. But Kilsheelan did manage to get themselves back into the game 18 minutes from the end when Simon O’Donnell fired a free kick to the net from all of 25 yards out.

This gave the Kilsheelan side impetus to attack and they pressured a Cashel defence that stood up to the test.

The last significant moment of the game then fell to the home side when they were awarded a free kick just outside the Kilsheelan box, and Michael Mc Dermott gave the keeper no chance with the dead ball effort.

Three points secured and heading back to the division above, Cashel still have a title to play for and it would be a brave man willing to bet against them securing that now too.