Marcel Borsa on the mark for Tipperary Town 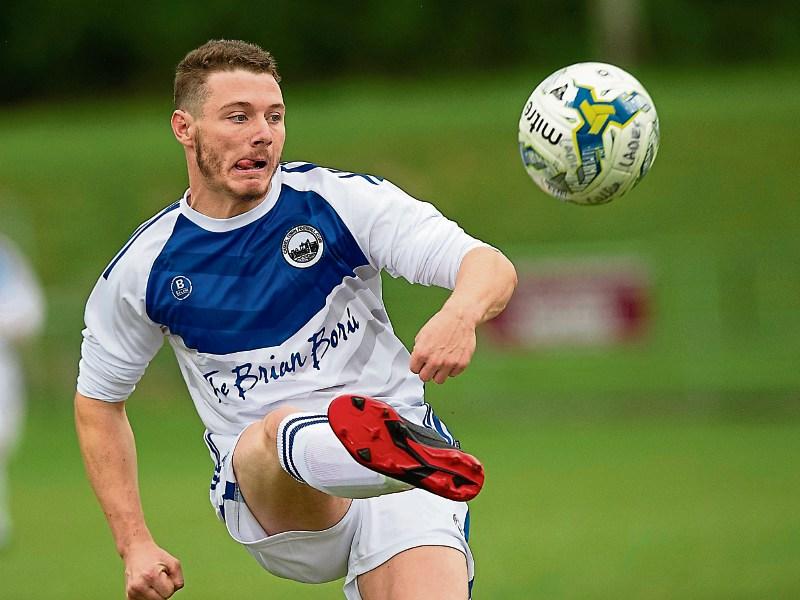 Cashel Town’s seconds stumbled in the title race when they conceded a very late equaliser and dropped two points against a Killenaule team who  still remain unbeaten in league action in 2019.

The point was however enough to ensure that Cashel’s second would also gain promotion to follow on from the promotion of their first team last weekend.

The home side were on top early on and opened the scoring in the 17th minute when they were awarded a penalty that was despatched to the net by Alan O Brien.

Killenaule never dropped their heads however and got back on level terms just after the half hour mark when Conor Sinnott slipped past the home defence and slotted home from close range.

This was how the game went to the break and the second half continued to be a tough closely contested tie. Cashel finally regained the lead 12 minutes in when some excellent work by Daniel Fitzpatrick found Timmy Dalton in space and he made no mistake.

But not long afterwards the visitors struck again when Mark Doyle saw an effort sneak in with the home keeper rooted to the spot.

The hosts responded again and only two minutes later they were awarded their second penalty of the day, with this time Timmy Dalton firing in his second of the day. This looked like being the decisive score as the home side held the lead into time added-on, but with time almost out the visitors struck a deserved equaliser and a point when Michael Webster with a well taken effort.

The other team locked in the title battle at the top of Division 3 secured three more precious points when they travelled to Bansha on Sunday afternoon and came away with what was eventually a comfortable win.

The two teams were well matched early on and it was actually a breakaway that lead to the first goal when the visitors took advantage of a Celtic attack breaking down to move the ball quickly up the pitch to where Tony O’Donoghue beat the keeper from ten yards to put Cahir in front in the 25th minute.

The game remained close after this however with both sides spurning scoring chances at the game went to the break with no more goals.

The next score was going to be vital in this game and it went to the visitors when Cahir were awarded a penalty just after the hour mark and Keith Murray made no mistake from the spot.

The hosts visibly wilted after this as the Park took control and they assured themselves of the points when Murray slotted home his second ten minutes later.

A goal by Paddy O’Donnell five minutes from the end was probably a little harsh on the home side but it keeps Cahir with the momentum they need to push on for a title.

Tipperary Town’s seconds recorded their biggest win of the season against a tired looking Kilsheelan side who were firmly rooted to the bottom of the Third Division going into this game.

The home side were on top right from the start and were unlucky not to open the scoring in the opening minutes. They finally did make the pressure count however when an excellent passing movement saw the ageless Aaron Hickey set up Darren Carew and he couldn’t miss from ten yards out in the 20th minute.

Kilsheelan to their credit didn’t fold and put some good moves together themselves but were regularly thwarted by Peter O’Hora and Michael Fitzgerald at the centre of the hosts defence.

The break came and went with only a single goal between the two sides, but gradually the home side started to turn the screw however and create chance after chance, before Shaun Tate played in the veteran Hickey, and with the feet of a gazelle he turned and fired to the net to put his side two up.

In total control now, Town began to turn on the style as they extended the lead five minutes later when provider Tate became scorer himself.

A fourth followed shortly after when Mark McInerney was first to react to a fumble by the visiting keeper and he poked home from less than five yards.

The coup de grace however was applied five minutes from the end when the energetic Marcel Borsa ran onto a ball over the visitors defence and he shot to the net from 15 yards out to give his side a comfortable five goal victory.

This was a tie between two teams who would have started the season with legitimate hopes of being involved in the promotion and title races, but who dropped too many points over the course of the season to leave themselves in no more than a mid-table end of season clash where the players have as much an eye on other competitions as this game on Sunday last.

Both teams tried their best to play good football in tough conditions and the home side settled a little bit quicker to fashion the opening goal with Ryan Hicks scoring in the 15th minute.

This was how the game looked to be going to the break but the visitors shocked the home side when Philip O’Doherty headed to the net to equalise just before half time.

It only took five minutes of the second period for Mullinahone to re-establish their advantage however and again it was Ryan Hicks who beat the defense to score from close in. Three minutes later Frank Clinton doubled the lead for Mullinahone and that was how it stayed until Ashley Laslett scored a fourth for the home side to ensure they would secure the  points.