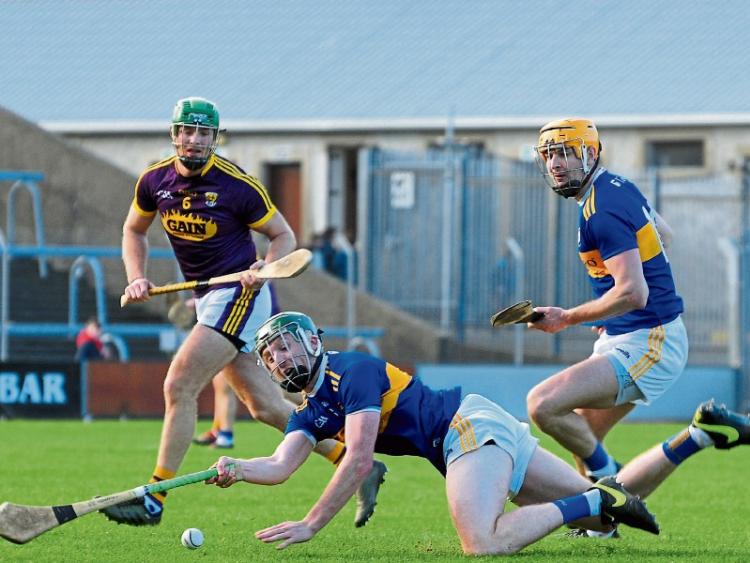 There are days when you lose and there’s no option but to suck it up, take it on the chin and file the experience away as a lesson learned.

And then there are days when you lose and you feel the utter injustice of the outcome.

Sunday last at Innovate Wexford Park belonged to the latter category. Fourteen-man Tipperary put on the type of stubborn resistance that deserved better than to be caught by a late, late Aidan Nolan winner for the home side.

It was a cruel ending to a game in which Tipperary showed remarkable resolve - a day when fortune very definitely did not favour the brave.

Liam Sheedy is a polished media performer, very mild and measured in his comments, passionate, for sure, but not noted for public outbursts of anger. Yet in the aftermath of Sunday’s game he struggled to contain his frustration with the refereeing performance. “I was wondering did the arms go both ways at all”, he commented cryptically in reference to the first half decision-making by the Cork official. The free count, he claimed, was 10 to 1 at one stage and he contrasted that with the failure to award frees late in the game to  Jason Forde and John McGrath when they were clearly fouled.

Later, The Sunday Game panel seemed to agree as they highlighted bad calls by the official including the booking of Donagh Maher and the ignoring of obvious frees in the crucial last phase of the match. It all proved costly for Tipperary who came away empty-handed after a right plucky effort by the team.

Tipperary made an explosive start to the match. Niall O’Meara, one of our best on the day, rounded his man from the throw-in before making progress and then laying off a hand pass in Seamie Callanan’s direction.  In the ensuing tussle Callanan got just enough contact to send the sliotar bobbing inside the left post for an instant goal.

It was a start that wasn’t sustained, however, as the match settled into a very rugged contest. The free count began to roll Wexford’s way, as Ian Byrne planted five of the awards to keep the home side in touch.

Individual touches of brilliance always delight. One such treasure came 11  minutes in when Noel McGrath with a deft little flick set up Ronan Maher for a long-range point. It was brilliant but seemed to escape the notice of many.

McGrath was soon in the spotlight again, this time for the wrong reason. There was no dispute about his first booking following a frontal tackle on Kevin Foley. The second infraction, however, might have looked dangerous in real time but TV replays cast a kinder light on the contact. No matter, Tipp were down a man with over half the game still to play.

An uphill battle now became a mountain climb, but I suspect Sheedy will have been most pleased by the response of the team to their predicament. This required total exertion by everyone and in truth the entire team responded with savage work rate. It wasn’t pretty hurling but it was physical and headlong with endless, energy-sapping rucks all over the pitch.

We got to the break four-up, that early goal still the most significant lodgement, though Wexford had blown a lot of wides and Paul Maher stood firm on their only goal chance to deny Aidan Nolan.

The second half brought renewed zip from Tipperary and they looked set to defy the odds. O’Meara pointed twice and in between Breen made a great catch to send Callanan away for another flag. When Robert Byrne split the sticks for a four in-a-row the margin stretched out to eight points and suddenly the day was taking on a sunnier complexion.

The next 18 minutes, however, brought a dramatic mood swing. Tipp scoring dried up and Wexford found renewed impetus. Their goal was critical to the fight back, our defence exposed embarrassingly, giving Casey the pot shot on a defenceless Maher in goal.

While Tipperary went scoreless for 18 minutes Wexford reeled off 1-5 to tie up the game with about eight left on the clock. The equalising score was a line ball by Dunbar, a linesman’s call hotly disputed by the Tipp management.

In the end it all came down to a tense, nervous finish. Jason Forde stepped up to land a huge free after Callanan had missed a few. Tipp led again. A bad mistake by Paudie Maher gifted Rory O’Connor the equaliser once more. Jake Morris was in for Bubbles and he slipped the defence to swing over another lead point before O’Keeffe levelled once more for the hosts.

Into the last moments now and the play was frantic. It was here that Tipp had ample reason to crib about the referee as several fouls went unpunished, the most blatant, perhaps, when John McGrath had to wriggle away from a head-high tackle before sending wide. How there wasn’t a call-back free for that one is baffling.

In the end Lee Chin was able to find an unmarked Aidan Nolan at midfield for the winning strike. Three minutes over time, it was the first occasion they led.

From a Tipperary perspective there were very mixed emotions afterwards. On the one hand there was huge admiration for the quality of the effort. In this regard at least Liam Sheedy has brought undeniable vigour and drive to the team; they look like a side playing for their manager with renewed passion.

On the other hand there was massive disappointment that such an effort was denied even a share of the prize by a refereeing performance that left followers puzzled. It had echoes of the 2017 All-Ireland semi-final when the free count went massively Galway’s way and people are genuinely asking why this happens to Tipperary. It’s one for the referees’ committee and their chairman to analyse.

In other aspects it was also a mixed package from Tipp. Wexford play this shapeless game where they crowd the middle third of the pitch and then break at speed into the open space. We seem to get sucked into the middle, losing our shape and, more importantly, markers losing sight of their men. Where was the man-marking on the Wexford goal? Or on the winning point? I’d assume the management will sit down and analyse video footage to see who has caught napping in those instances.

Tactically Wexford seem to manipulate a type of organised chaos in the middle third of the pitch and it’s a routine that we have yet to learn how to handle. Defensively, surely, you can’t leave open acres of space in front of your goal as happened on Sunday, though in this case the complication of being a man short has to be factored in.

Individually there were mixed credits for Tipperary. Goalie Maher couldn’t be faulted overall.  (Incidentally I wasn’t even aware that he was on the panel). He had that first half save to his credit. On the Wexford goal there wasn’t much he could do, though in those one-on-one situations I would like to see the goalie advancing off his line to reduce the angle and force the shooter into a rushed shot rather than allowing him pick his spot.

It wasn’t a great day for defenders Donagh Maher and Barry Heffernan, so the jury continues to sit on their cases. The others did better, Ronan probably the best. Midfield was patchy at times with lots of effort and individual items from both Breen and Byrne and in fairness it was a clogged-up zone where it was difficult for individuals to leave a major mark.

In attack O’Meara was probably the pick, with Bonner hustling as usual. Forde had useful moments, as did Noel McGrath before being dismissed. Callanan returned a goal and point from play, though at times playing too far from goal and those missed frees will keep the debate stirred about free-taking. I’ve no doubt Forde is the better option so maybe in future Callanan will be confined to the close-in ones and Jason on the long-rangers.

With Niall O’Meara and Bonner Maher nursing injuries by the end of the game the management will be keeping a close eye on the casualty ward ahead of this  weekend’s visit by Cody and his Cats. With Kilkenny also losing last week, this game could well be a critical fixture as we head into the final two rounds of the series.

I’m sure Cody thought he had seen the last of Sheedy on the sideline so it will be interesting to see the renewal of that particular rivalry on Sunday. Two passionate men, they won’t be holding back in this fixture with bragging rights – and league positions - at stake between these old rivals.

Limerick’s victory over Kilkenny last week was eye- catching because it was so comprehensive. The All-Ireland champions have certainly moved seamlessly into the new season and even allowing for Kilkenny’s depletion this was an emphatic statement by the Shannonsiders. Maybe they’re shining too early in the season and will find it difficult to sustain the effort, but for the moment at least they’re certainly the team to reckon with.

Nobody needs reminding of our abysmal league record against Kilkenny in the modern era. They’ve established a supremacy that we’ve found impossible to break. In that context I suspect the Tipp management will go all out here to try and make some sort of statement of intent. The fact that Cody is without the Ballyhale contingent and others through injury makes a Tipperary win all the more essential. If there’s one standout game among the five in the series that Tipperary needs to win more than any other then this must be it.

I expect some thunder in this one then and whoever is appointed to referee let’s hope that a foul for Kilkenny at one end is also a foul for Tipperary at the other.