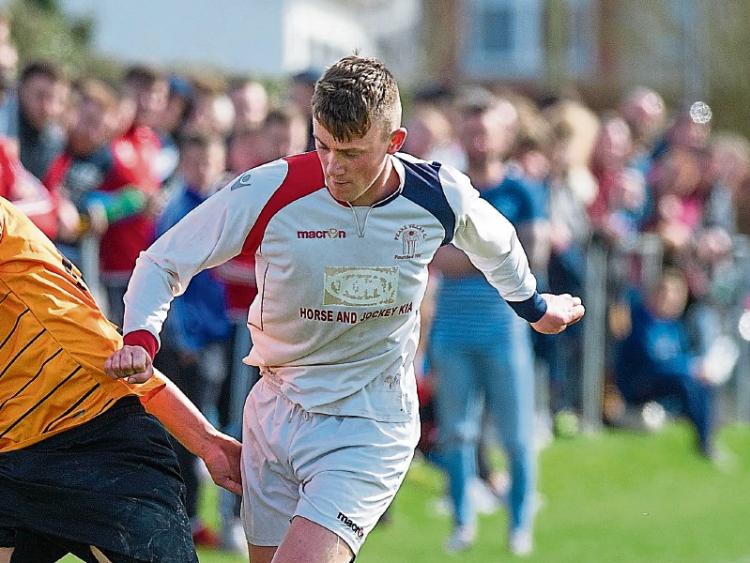 Darren McGuire opened the scoring for Peake Villa B in their shock win over Clonmel Celtic in the Tipperary Cup at Clonmel on Sunday last.

Peake Villa’s seconds would likely have felt that they were the underdogs when they travelled down to Clonmel on Sunday morning to face Premier League side Clonmel Celtic, but they provided the shock of the competition so far by going back to the Thurles with their name in the hat for the last eight draw.

At no point were the First Division side overawed and the game was a very even affair in the opening stages, with a strong wind making free flowing football difficult.

The visiting side eventually opened the scoring ten minutes before the break when they were awarded a penalty kick and Darren McGuire netted from the spot, but Celtic’s Paul Kennedy levelled matters just before half time when he rolled back the years and fired in the most delicate of lobs to beat the Villa keeper.

The home side then had the advantage of the wind in the second period but seemed unable to harness it properly even though they now carried much more of a threat. Villa continued trying to make chances and they were rewarded for a second time 18 minutes from the end when they went back in front courtesy of an excellent finish by Jack Ryan. Celtic didn’t panic, but their equaliser didn’t come from the intricate build up play that their supporters have become used to, rather straight from the route one tactics book. That said it was a brilliant effort with Kennedy teeing up Seanie O’Hara to fire a stunning shot into the net, and eventually bring the game to extra-time.

Both teams found it difficult to create clear chances as the legs and minds tired, and it seemed that penalties were on the cards before Adam Garrett popped up four minutes from the end to score a close range effort after Celtic keeper Ben Cooney did well to parry Eoin O’Dwyer’s initial effort.

The final few minutes were frantic as Celtic went looking for a leveller but eventually time ran out and the Thurles side celebrated a famous victory.