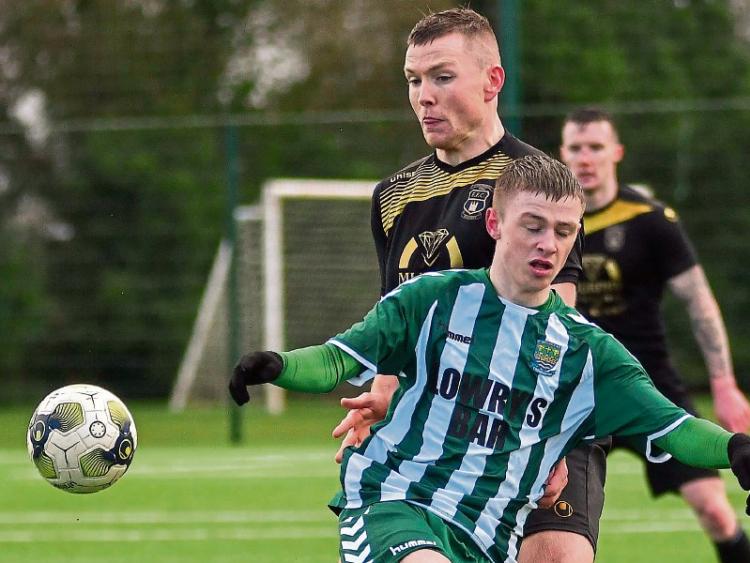 Once again these two teams supplied a tough tight game with the Saints unable to put away their West Tipperary rivals inside regulation time, instead having to wait it out until they were victorious from the penalty spot.

Saints had enough of the ball to win the game but Bansha chased and harried well, allied to some last ditch defending and some heroics from Calum Fanning seeing the game go all the way to penalties.

The home side dominated exchanges but perhaps the best chance of the first half fell to the visitors when Paul Breen was forced to clear a ball off his own line six minutes before the break.

Jimmy Carr did superbly well ten minutes after the break to control a long ball, over the visitors defence and when it looked like he would score, Calum Fanning got down to turn the ball around the post.

Saints won a series of corners and Paul Breen went closest on the hour, heading down well but Fanning parried the ball away.

The hosts continued dominating throughout the second period but were unable to break down the stubborn Celtic defence.

The extra-time period went by with nothing much of note, as both sides were showing signs of tiredness, so the breaking of the deadlock was left to the penalty shootout. In this the Saints held their nerve and prevailed, leaving them still in line to pick up an amazing five trophies by the end of the season.

The possibility of an all Saint’s cup final remains as the Micheal’s seconds had a fantastic win against Division One league champions Glengoole on Sunday morning.

The early part of the game was tight as both sides were probing each other looking for weaknesses. However it was the visitors who opened the scoring when ace striker Danny O’Brien got in behind the home defence after a half an hour and gave the Glengoole keeper no chance with a close in effort.

After that the visitors seemed to take control of the game and doubled their advantage midway through the second half with O’Brien again getting on the scoresheet.

When Colm O’Dwyer scored a third with ten minutes remaining there was no way back for the home side and the Saint’s march on with both sides now in the draw for the semi-finals.