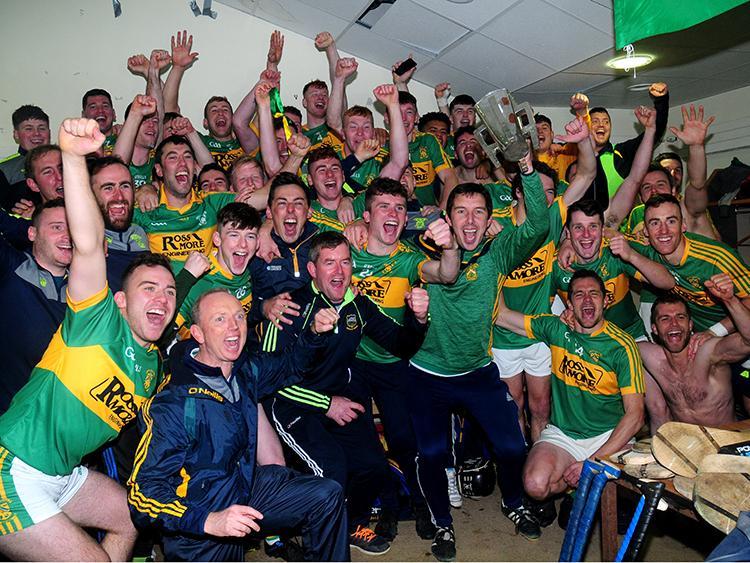 The Clonoulty-Rossmore panel of players and management team pictured celebrating their county final success in 2018 - can the West men successfully defend their West and county titles this season?

The West and County Tipperary champions Clonoulty-Rossmore got the defence of their divisional crown up and running at a sun-drenched Dundrum on Sunday last when beating Cashel King Cormacs with fourteen points to spare.

Fielding twelve of the side that started last year’s county final Clonoulty-Rossmore were never headed in this game against a Cashel side who were making their first appearance in senior hurling since 2014.

Cashel’s cause was not helped by a knee injury to Eoghan Connolly in the opening period which forced him to leave the field of play. Cashel did manage to keep in contact with the holders during most of that opening half, which saw the sides level on two occasions, but after the break there was only one team in it and a late goal from man of the match Timmy Hammersley was the icing on the cake for Clonoulty. Indeed, Hammersley finished the game with a total of 1-16 to his name.

Clonoulty set out their stall from the outset and points from Dillon Quirke and Timmy Hammersley in the opening minute set the tone of this game, but points from Ross Bonnar and Adrian Cummins had the town side on level terms by the third minute.

Timmy Hammersley eased Clonoulty back in front before Adrian Cummins tied the game for the second time three minutes later. This was as close as Cashel got and once Clonoulty got their head in front they were able to dictate proceedings.

Fiachra O’Keeffe, Paudie White and Jimmy Ryan all got on the score sheet as John O’Keeffe and Ciaran Quirke were able to deliver good ball out of defence. Mikey Ryan was controlling the midfield area and ensured that quality ball was delivered to their forwards.

Cashel did keep up the pressure and Ross Bonnar was causing a few problems to the Clonoulty rear guard when hitting three points in the opening eighteen minutes.

Eoghan Connolly hit two long range frees while Conn Bonnar took over the free taking duties in Connolly’s absence and had three on the board by half-time.

With the Clonoulty forwards moving well and creating space Timmy Hammersley was able to capitalise and he finished the half with eight points with four coming from open play.

With Connolly off the field Cashel needed a good start to the second half and Dylan Fitzelle pointed after four minutes. However, with Clonoulty moving up a gear Cashel King Cormacs found scores hard to come by while Thomas Butler and Cathal Bourke - who were both quiet during the opening period - came more into the game and hit two points each during the half.

Clonoulty kept tapping over points at will and a late goal from Hammersley was a just reward for his overall play and contribution to this game. Cashel, to their credit, never gave up, but were unable to penetrate the Clonoulty defence and get through for the goal that was needed to bring them back into this game.