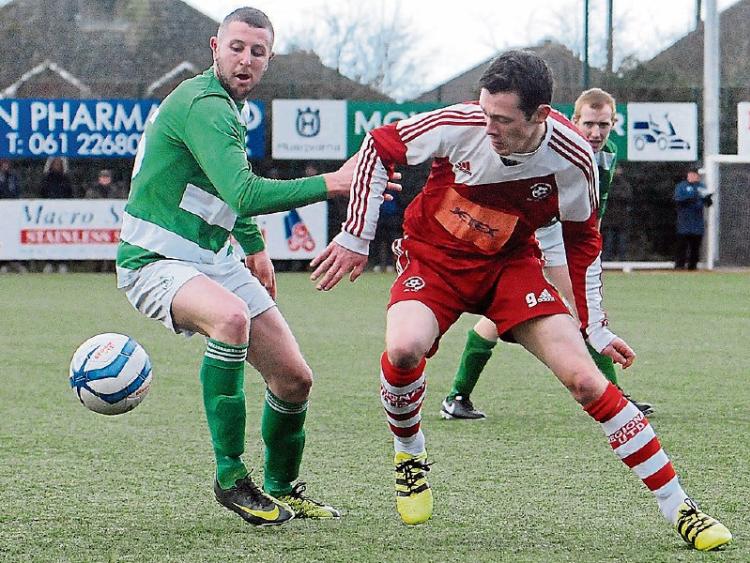 Olly O'Driscoll who scored five goals for St. Michael's in their 11-0 thumping of Bansha Celtic in the Tipperary Premier League last weekend.

At the beginning of the season many of the football watchers in South Tipperary would have looked at this fixture and considered that it might be a make or break tie for the current league champions, as it seemed that they were going to be pushed all the way by close neighbours Bansha Celtic.

When Celtic beat the Saints in the John Delaney Cup and in the reverse fixture, many thought that it might be evidence of a changing of the guard in the TSDL. However last week’s game showed the difference between the two teams in terms of depth of squad and ruthlessness to exploit an opponent’s weaknesses, when the champions tore apart a young inexperienced Celtic side with no mercy shown whatsoever.

After a bright opening, David Slattery had the home side ahead inside ten minutes when he touched home an excellent cross by Willie Armshaw.

The writing was on the wall however when the hosts added two more goals in the next six minutes with David Joyce and Armshaw adding the goals.

After that the floodgates opened and the Saints added four more goals without reply before the half time whistle, with Armshaw getting a second and Olly O’Driscoll completing a hat trick inside 15 minutes.

The second half got no better for Celtic who struggled to get out of their own half, never mind to make any impression on the scoreline, and the Saints added four more goals without reply to take all three points in a comprehensive but ultimately facile win.

The second half goals came from David Joyce getting a second and Colin Bargary scoring with a free kick, added to by two more O’Driscoll efforts.

With the league season pretty much wound down for both these sides, they played out a good game of football, albeit without the intensity usually present at games between these sides, at the Tower Ground in Thurles on Sunday last.

The home side were short of a number of senior players but this gave opportunities to some of their promising youths and the young  Thurles players stepped up to represent the team well enough.

They were instrumental in much of what was a very good first half for the home side, but perhaps showed their inexperience when they were caught by a quick breakaway by Town midway through the first half that lead to the opening goal.

This was how it looked like going to the break but almost on the stroke of half time a moment of individual brilliance saw Kevin Patan take a ball 30 yards out and lash it straight into the top corner, giving the visiting keeper no chance of keeping it out.

The second half saw half chances for both sides but they were unable to add to the score line and in the end the teams both shared a point each.