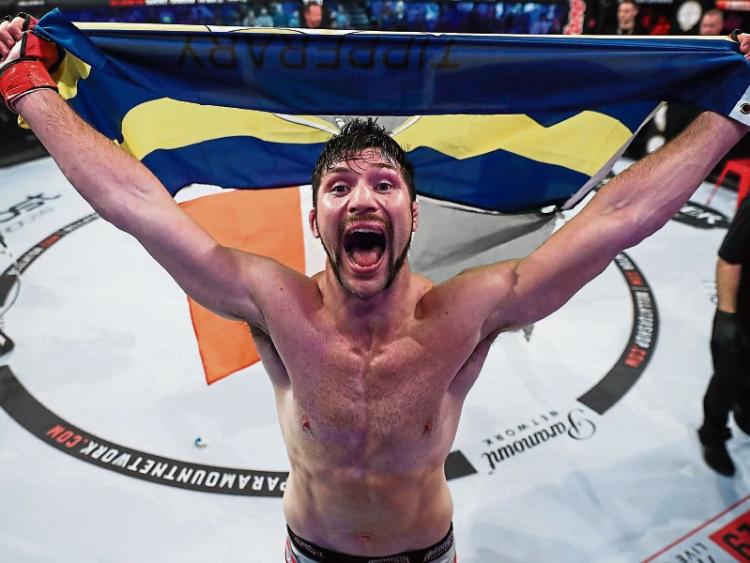 Holding the Tipperary and Irish flags, Will Fleury celebrates his victory over Scotland’s Shaun Taylor at Dublin’s 3Arena in February

The rough and tumble, often brutal world of Mixed Martial Arts (MMA) is light years away from working in an office as a quantity surveyor amid the bright lights of New Broad Street in the City of London.

That, however, is the radical career change that Tipperary man Will Fleury has made. And he hasn’t looked back since he made that momentous decision.

An unbeaten career as an an amateur has been followed by the successful transition to the professional ranks, where he has won five of his six bouts and carved out a niche for himself in what is, physically and mentally, one of the toughest and most demanding of sports.

“I was working as a surveyor in London but I absolutely hated it”, says the 30 year-old Cahir man.

“Being cooped up in an office didn’t feel healthy, or right for me. I’ve always preferred being active.

“Even if this (turning professional as an MMA fighter) didn’t work out for me I would have gone back and done strength and conditioning courses.

“But I’m extremely glad that I'm giving it a good go”.

Will is the son of Denise and Charlie Fleury, who were antique dealers in Cahir for the best part of 20 years. When he left secondary school he studied arts at UCC and quantity surveying at CIT.

He spent two years in London working as a quantity surveyor before returning to Dublin three years ago, and  now fights out of the martial arts school SBG (Straight Blast Gym) Dublin.

He played rugby with Cashel from the age of 8 up to his early teens and continued to play the sport while a student at Wesley College in Dublin and later with Clanwilliam, lining out with the Tipperary town club from the age of 16 to 21.

When he broke his foot during a summer break in New York, he was advised by a physiotherapist that boxing footwork was the quickest way to recover.

He trained for a number of months at a gym at the Frankfield industrial estate in Cork that eventually evolved into an MMA clinic. While there he noticed an MMA cage and, undaunted by the challenge, decided nine years ago to give it a go.

“From playing rugby I thought I would be better at an individual sport”, he explains.

“I was never physically intimidated by rugby, and was always throwing myself into tackles.

“And I had two older brothers so I was used to getting the crap kicked out of me!

“I had a lot of faith in myself initially and didn’t feel the pressure as much as others. I just wanted to test myself and see what I could do. I always had a feeling I would be pretty good at it”.

That self-belief was fully justified when he won all seven of his fights as an amateur, contests that were staged in Dublin and Cork, as well as one in London, although after a while he found it difficult to source opponents - “when you're winning a good bit nobody wants to fight you”, he says.

While training in London he found that he was holding his own against “a lot of good pros in the gym”.

“The whole Conor McGregor thing was taking off at the time, around 2014-15. Those pros were making a living out of it so I thought I’m fairly good at it, why can't I”.

Since signing to Bellator, one of the world’s biggest MMA promotions, the middleweight fighter, who weighed in at just over 185 lbs. in his last fight, has made an equally strong impact in the paid ranks.

His sole defeat in six bouts was against the Macedonian Alen Amedovski but he bounced back the next time out by defeating Scotland’s Shaun Taylor, who weighed in 10kgs heavier, at Dublin’s 3Arena in February.

“That was a brilliant night”, he says.

He has also fought in South Africa, where he was a star of a reality TV show for MMA athletes and won two fights, although technically they don’t count on his professional record.

“It’s going pretty well, although it has taken a lot longer than I thought and I’m not quite where I want to be yet”, says Will.

“Apart from one brief lapse against Alen Amedovski, I have dominated every minute of every fight and my career has been one of utter domination. I have responded to every challenge I’ve been given”.

He believes it’s only a matter of time until he gets bigger fights, and then he says he’ll show what he can do.

“Within 18 months I want to be the Bellator world champion.

“The current world champion is Gegard Mousasi (from Holland) and if you put me in front of him tomorrow I think I could beat him. I feel that way about a lot of the Beallator fighters, and to get that chance you need to keep winning.

“I’m incredibly proud to give Tipperary and Munster a representative in a worldwide organisation like Bellator”.

To reach the level where he’s now at requires an amount of dedication, sacrifice and sheer hard work.

“The training is pretty intense most of the time. In the middle of camp you train two to three times a day, five or six times a week. Most of those sessions are pretty intense.

“When you wake up after a training session you’re so sore you often wonder how you’re going to get out of bed. But you force your way through it and then your body responds. A lot of it is down to mental strength”.

Will is in full training camp at present. Bellator returns to Dublin in September, and as preparation before then he hopes to fight in either London in June or Oklahoma in July.

For now, it’s a case of onwards and upwards for the Cahir athlete.