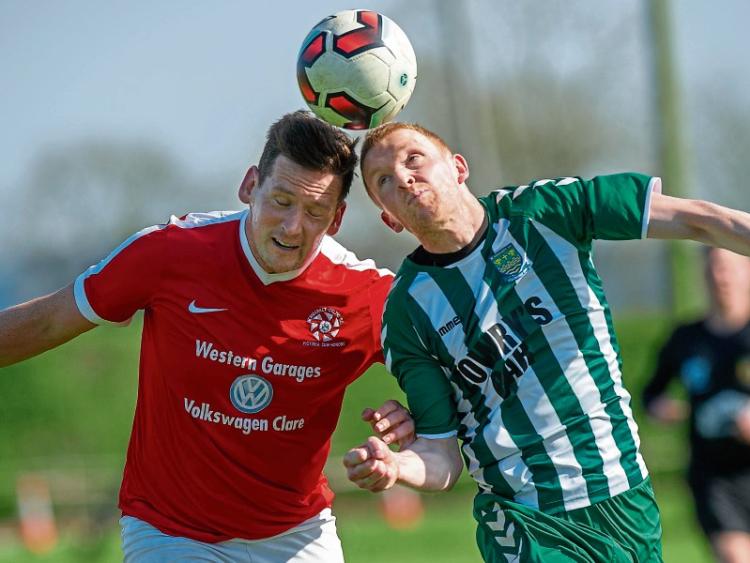 It’s not actually an annual thing, but it almost feels like it, as the Pride of Tipperary, travel en masse once again to the Aviva Stadium, Dublin, next Saturday to contest their sixth final FAI Junior Cup final since the turn of the Millennium.

When they get there, they will face familiar foes  Sheriff YC, in a battle that will make anything from Game of Thrones look like a mere kerfuffle, as the two sides seek to ascend to the summit of Irish junior football. And it is the Dublin side who have been the more successful club in recent years, with four victories since 2012, even if their most significant victory on the way to this years final, was in the committee rooms after they overturned a defeat to Limerick side Regional United on a technicality after a defeat on the pitch in the quarter finals.

On paper, and ultimately on grass, this game looks to be quite a tough task for the Saints against a team that would probably hold their own in the Leinster Senior League.

The TSDL champions however have never feared the Dublin side and will have recent memories of turning them over in Celtic Park in Clonmel, in their way to the famous victory in 2014.

They have a squad jam packed with players with big game experience and built on a strong defensive platform with Adrian Walsh in goal behind a solid central defensive partnership of Paul Breen and Sean Guerins, allied to Irish junior international captain Chris Higgins and John O’Brien at full back. Very few goals have been conceded in any competition this season, and the watertight defence have only once given away more than a single goal in any ninety minute period.

But a mean defence won’t get you goals and that is left up to the midfield and forward wizards, which have a sprinkling of experience in the likes of Colm Bargary and Jimmy Carr, supplemented by the youth of former Cork City underage star Willie Armshaw and International player of the year nominee Shane Ryan.

Up front David Slattery’s work rate and eye for goal, will carry a threat all afternoon one hopes, and also that he emulates his performance of four years ago by getting his name on the scoresheet once again.

The real strength this year though is in the extended panel, with players like Jonathan Kennedy, David Joyce, Olly O’Driscoll, Derek Breen, Danny O’Brien, Joey Mulcahy bringing a depth of experience if needed.

On the other side, Sheriff’s best result so far this year was their comprehensive beating of St Michael’s Munster Junior Cup opponents Pike Rovers, and they have a knack of doing enough to get over the line.

The Saints have trained hard since last July and will have the heart breaking defeat to eventual winners North End at the semi-final last year to act as inspiration this time around to go a couple of steps further.

They beat a very useful Manorhamilton side on the road in December, and got revenge for some recent defeats to Clare’s Newmarket Celtic who were probably the best side they played winning an epic encounter by two goals. They also showed the character to dig out victories at Evergreen and against Glengad.

The management know a big performance is needed next Saturday but they will apply themselves with the same dedication and professionalism that they bring to every fixture. The town will have a huge support in the Aviva with a special train lined up and they will be hoping that the 12th man can bring them to glory.

This will likely be a tight cagey affair with little between two top sides that may not be decided in 90 minutes. Dead ball prowess or one bit of luck or magic could swing the dice either way.

I’ve a sneaking feeling though, that this day could be one for the TSDL side to savour, and the famous cup could be heading back to the Back of the Chapel