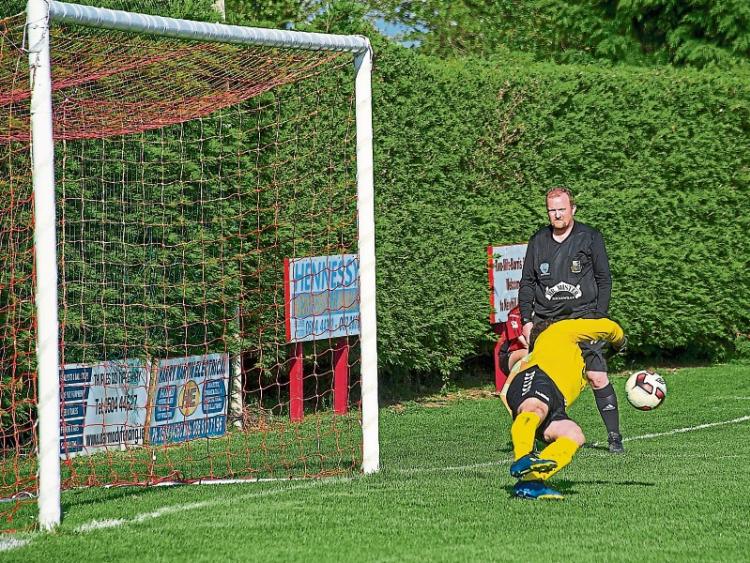 Some of St Michael’s most disappointing nights over the past number of years have come via defeats from the penalty spot, and when this year’s Munster Junior Cup final went all the way to the dreaded shootout, they must have been fearful that they might not prevail again.

However, this time they produced heroes and a heroic performance to ensure that they picked up their third title of the season and remain firmly on course for what could be an unprecedented drive for five over the next number of weeks.

The game itself was pulsating and ebbed and flowed throughout, with the nerves of the Tipperary supporters in shreds at the end of the 90 minutes and again 20 minutes later when two halves of extra time had not produced a winner in the open game.

And by then they were a long way from the beginning of a game that saw the TSDL side on top for much of the game without managing to finish it out in the regulation period.

They began well but it was the Limerick side that had the first clear chance to open the scoring when Eoin Hanrahan saw a header come back off the crossbar in the fifth minute and was scrambled away to safety. But as they have done for years now, the Saints settled into a rhythm and began to dominate midfield and set up chances for their forward players. David Slattery has regularly popped up with big goals in big games and thought he had opened the scoring in the 20th minute only to see his snap shot blocked, and minutes later wing wizard Jimmy Carr also went close.

Paul Breen rolled back the years as well when he ambled forward and nearly converted one of his speciality headed goals from a corner kick just after the half hour mark.

With Pike now on the rack, it was imperative that the Saints press home the advantage and they finally did so four minutes from the break when Colin Bargary, who is heading to Lithuania during the week to get married, split open the Limerick side’s defence with a sublime pass to Jimmy Carr and the Irish international made no mistake from close range.

After going in at half-time a goal to the good, St Michael’s almost undid their good work a minute into the second period when they conceded a close in free kick that forced keeper Aido Walsh into making an excellent save at the bottom of his post. It was perhaps a precursor to the heroics that Walsh was to produce later in the game, but was an effective warming to his side that the job they were doing was far from complete. 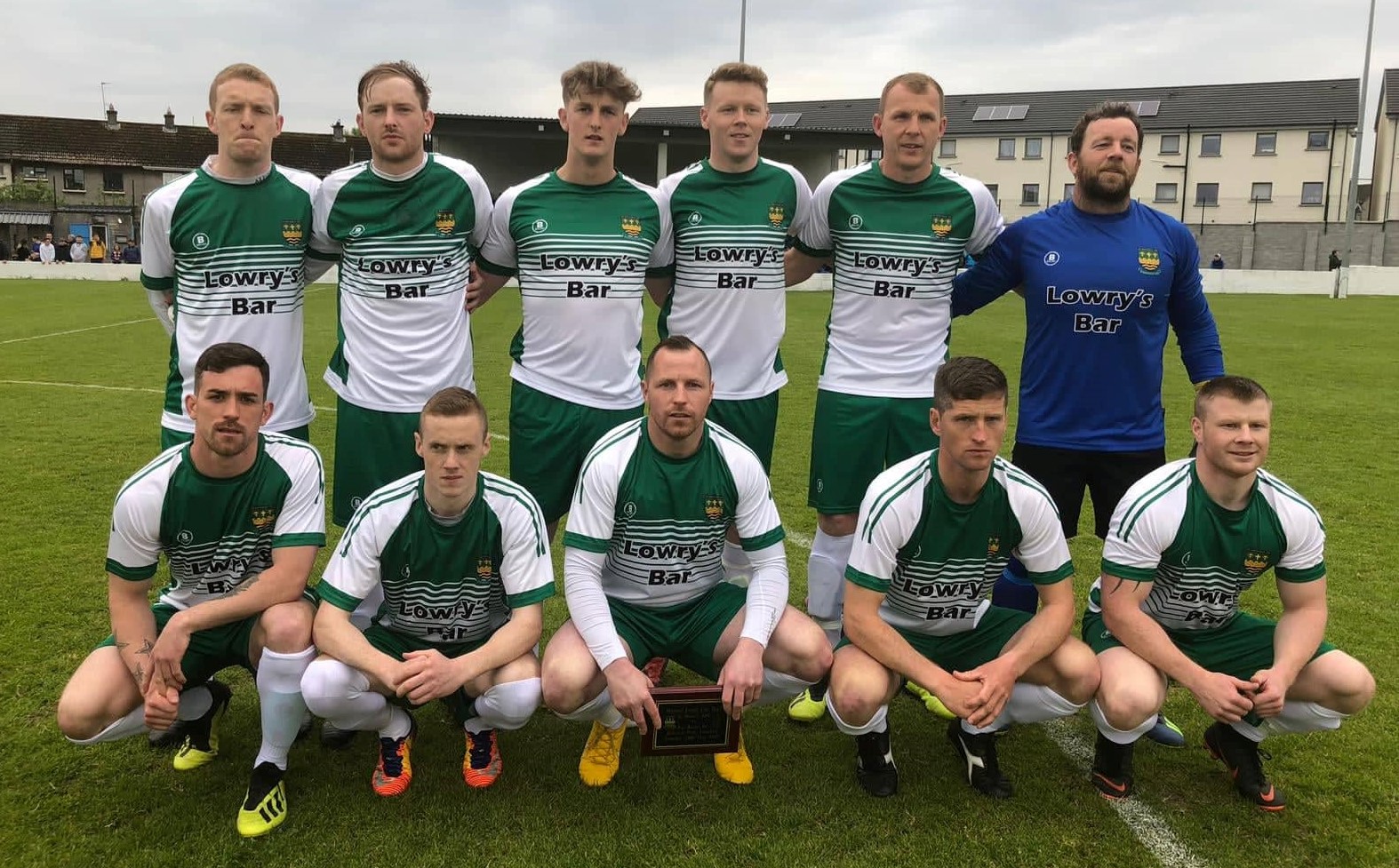 The St Michael's team prior to the game against Pike Rovers.

Pike took encouragement from this and the second half was a much more even game in terms of possession and field position as Pike tried to get themselves back on terms. Conor Kavanagh thought he had done this in the 66th minute when a cross he sent in looked like it deceived Walsh in the Saints goal but it eventually floated harmlessly wide.

Needing a second to give themselves so breathing space the TSDL side fashioned a number of chances as the time ticked away through Slattery, Bargary and Shane Ryan, but they were unable to add to their tally.

The defence was holding firm and it looked like the Saint’s would finish the job as the watch ticked towards the final of five minutes of injury time, but in a last desperate effort Pike sent a high ball into the area that Walsh looked to have gathered until he was impeded and Colin Daly tapped in.

All sides looked at the officials and the Tipperary supporters seemed flabbergasted when he pointed to the centre spot and awarded the goal meaning another 20 minutes were going to be needed to try to produce a winner.

Given the amount of effort that both sides had put into in the first ninety minutes it was no surprise when the extra time was largely uneventful with perhaps a header by Saints’ Sean Guerins being the best chance to score, until the Pike keeper took it comfortably.

By the final whistle the two teams seemed out on their feet and it was clear that the shootout was going to be something of a war of attrition.

And so it proved, with Saints missing their first two spot kicks and three of their first five. That meant that although Jimmy Carr and captain fantastic Chris Higgins converted, Jonathan Grant of Pike had a penalty to win the cup for the Limerick side. But Aido Walsh was not intent on letting that happen and he brilliantly saved the final penalty kick to bring the shootout to sudden death.

Ollie O’Driscoll scored a third for the Tipperary side, but they again had to rely on the brilliance between the sticks of Walsh to keep the tie alive after Willie Armshaw couldn’t convert.

Finally Colin Bargary scored and Pike’s Gary Neville missed to send the Saints fans into paroxysms of delight as they poured out onto the pitch to celebrate a ninth success in this competition and extend their lead as the holders of the record number of wins. 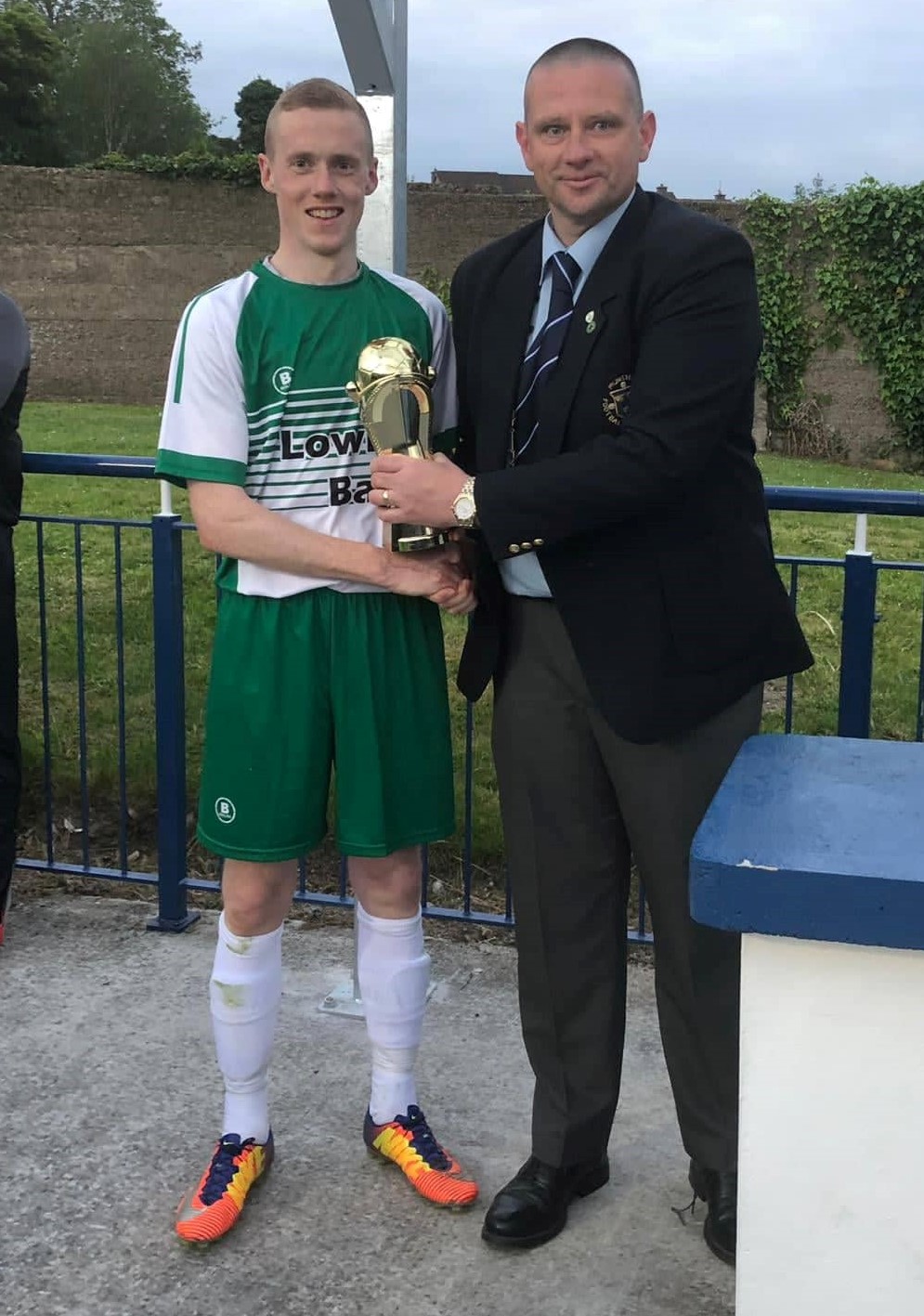 Man of the Match Jimmy Carr, St. Michael's accepts his trophy after the game.

It also stopped Pike’s chances of completing three in a row in this competition and gave the mighty Saints their third trophy of what is turning out to be a very special season for them.