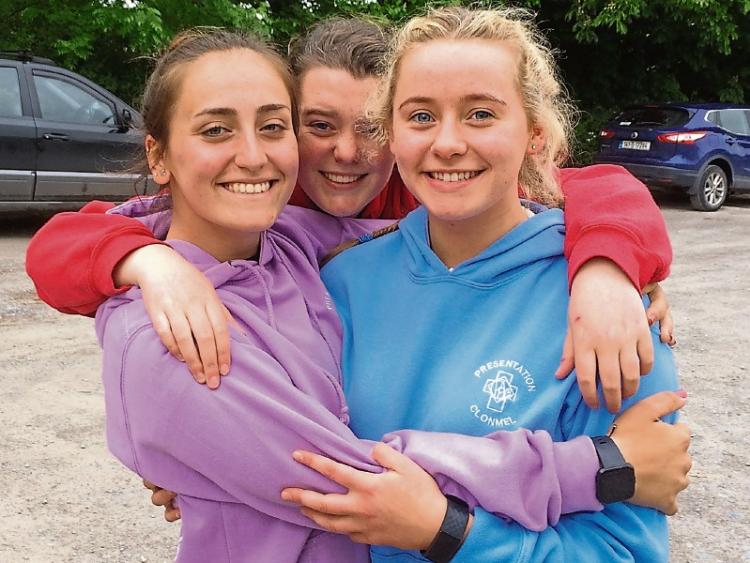 ADIOS AMIGO: Anè, Brooke and Gillian gather for a group hug before Anè returns to her homeland of Spain after an eight months student exchange

These are busy times indeed at Clonmel Rowing Club, who this year are celebrating their 150th year at their Suirside venue at ‘The Island.’

Thank you to all who volunteered and contributed to our flag day over the past weekend.  We raised much needed funds to keep our boats, and our junior members on the water.  The community support is greatly appreciated.

A small group competed at Metro Regatta in Blessington, Co Wicklow on Saturday  last, May 25. Óisín McGrath (Masters) and Odhran McGrath (J14) won their 1000m finals in single sculls.  Anè Bengoa Alonso and Gillian Juleff (2X) and Sadhbh McGrth  (1X) came 4th in their respective Div2 A finals.  Jason McKenna and Robbie Hallinan also competed in single sculls but did not progress from the heats.

The crew rowed together in the mixed competition and joined with with oarsmen and women from Tralee and St Michael’s Rowing clubs for the mens and womens 4X+ competitions respectively.  The crews won no silverware but had a sunny day on the Barrow with lots of lively competition.

The popularity of recreational rowing is on the rise with 11 clubs from across the country competing in this event.

As part of our 150th anniversary renovations, the interior of the club house received a new coat of paint this weekend thanks to a massive effort by the adult rowing group who volunteered their time and decorating skills.  Thanks to Michael Green for organising and supervising the work.  The club is looking great.  Thanks for all of your efforts.

Lastly, the club bids a fond farewell to Anè Bengoa Alonso as she returns to her native Spain after an eight month student exchange.  She represented the club well throughout the season and was a welcome addition to our competitive squad. We wish her well in her future rowing career.