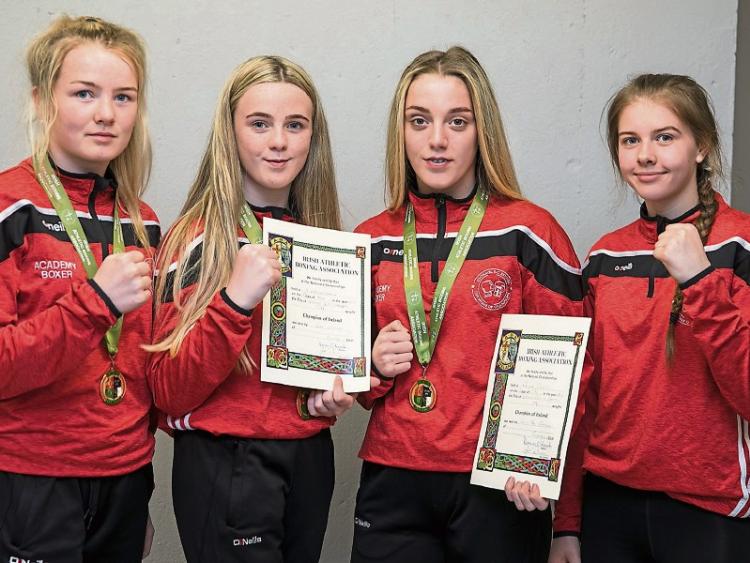 Clonmel Boxing Club was well represented at the National Girls Championship finals held at the National Stadium in Dublin, with four girls competing and three reaching the final in their respective categories.

European Junior champion Ellie Mai Gartland was looking to claim her fourth Irish title and she did so in style after a tough battle against Niamh Fay, Swords. Ellie took a 3-2 decision to be crowned national champion after moving up a weight this year to the 57kgs division.

Leah O’Gorman won her first Irish title  and her success was acclaimed by one of the loudest cheers at the National Stadium on finals day. Leah took the Girl 2, 53kgs title after a complete display of skill and determination to outbox her opponent Reka Cummins, St. Joseph’s, Edenderry, forcing her to retire in the third round.

In the semi-final Leah beat Ellie Farrell, Smithfield, 4-1. The popular Clonmel girl, who was beaten in last year’s final, has had to overcome many obstacles in her life, both inside and outside of the ring, which made her title win even sweeter.

Courtney Joyce got off to a great start in her bid to claim her third Irish title with a semi-final win against Tara Crowe, Tipperay town on a 5-0 unanimous decision. Courtney faced Alicia King, Ratoath, Co. Meath in the final and after three hard-fought rounds, where there wasn’t much between the two boxers, the Co. Meath boxer took the decision and the title.

Paige Dillon entered the championships after claiming her first Munster title the previous week but unfortunately had to withdraw at the semi-final stage due to illness.