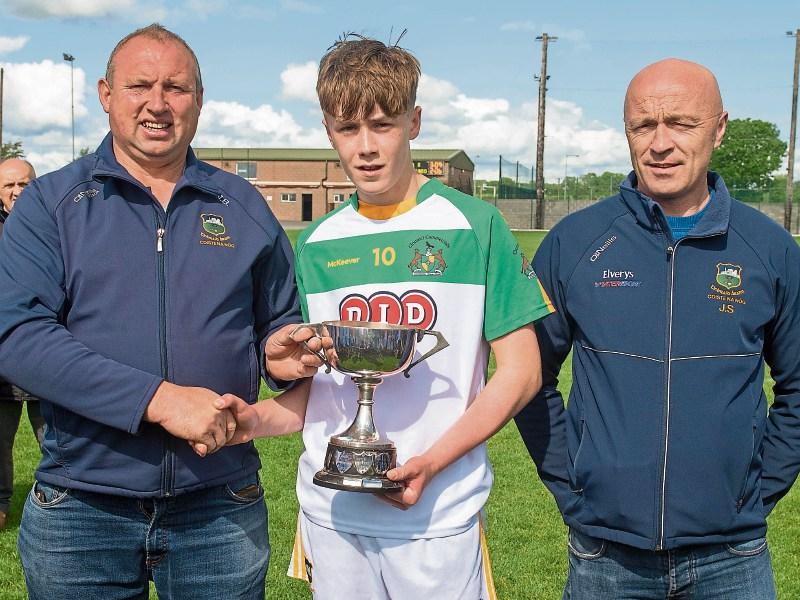 Clonmel Commercials held too many aces, controlling the crucial second half against a gallant Nenagh Eire Óg, to make it two U-14 ‘A’ titles in a row for the boys from Clonmel.

There was quality throughout the field as both teams used the full expanse of Leahy Park, making for an exciting finale.

In the first half Commercials had to be patient. Tadgh Sheehan was key to keeping the scoreboard ticking along, his points off his right then left were top drawer. Another was Alex Creed, involved in four of six scores. Nenagh posed a serious threat to Commercials’ hopes, and Sam O’Farrell was the main reason. His composure when in possession was so natural and devastating. The Blues held a one-point lead after seven points were shared. Áodán O’Connor, Filip McIntyre, Sam O’Farrell and Jake Houlihan pointed for Nenagh; Tadgh Sheehan, Alex Creed and Darragh O’Connor for Commercials. The game found another level as Nenagh hit 2-1, Sam O’Farrell scoring the first goal while the second was incredibly manufactured, the finish supplied by Áodán Ó’Farrell. Jake Houlihan pointed to give them  a comfortable lead. All the while there was concern in the Nenagh back line. Two big scores validated that concern- Joe Higgins’ first goal and Tadgh Sheehan’s second point, leaving the half-time score 2.5 - 1.5.

Commercials showed their intent from the restart, Alex Creed hitting a goal. Nenagh’s effort never waned yet they only registered two scores in the second half. Clonmel, with the athletic and skilful Thomas Charles on song in midfield, dominated. Alex Creed levelled things before the excellent Joe Higgins’ well- taken goal gave them  the lead. Commercials’ quick movement and execution of dead ball situations through out caused problems. They hit the next three points to build an insurmountable lead. Tadgh Sheehan hit frees either side of Alex Creed’s final score.  Nenagh had the  final score, a Sam O’Farrell free. They showed that they will represent Tipperary well at this year’s Feile Peil. They have Sam O’Farrell, Josh McLoughlin, Filip McIntyre, Áodhán Ó’Connor all playing well.

Clonmel Commercials Under 14 team with their mentors prior to the final against Nenagh Eire Og played at Leahy Park in Cashel on Saturday last.