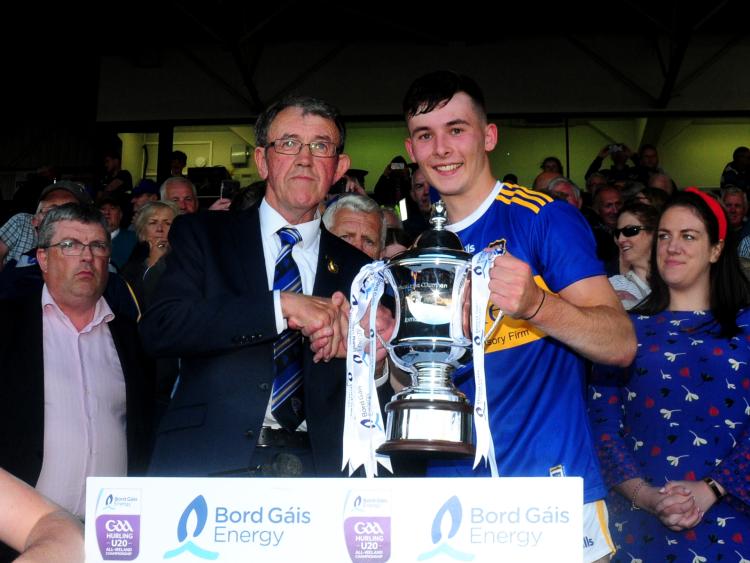 In the wake of the dramatic finish against Cork in the final of the Bord Gáis Energy Munster Under-20 Hurling Championship Tipperary captain Craig Morgan has revealed that he never doubted for a second that the Premier County could rescue the situation - a Jake Morris goal in the fourth minute of second half injury time propelled Tipp to a famous provincial final win.

When Craig Morgan was asked if he thought at any stage that Tipperary's chance to win the first-ever Munster under-20 hurling final had evaporated the Kilruane man's answer was simple and unequivocal.

“No, not at all with the character that is in the boys,” Craig Morgan said with a beaming smile.

Craig Morgan (Kilruane MacDonagh's) has now followed in the footsteps of his fellow club man Séamus Hennessy who captained Tipperary to provincial under-21 hurling honours in 2008.

“It's incredible to follow in his footsteps - Séamus would be a massive hero of mine, but, look, it is just a fantastic feeling to win such a great game like that. I have to give credit to the boys inside (in the dressing room) and the character that they showed,” Craig Morgan said.

“I always thought that we were going to come back - this team will never die. It's always about next ball, next ball. And, I knew that if we got the opportunity that we would take it. We did and it just shows the character of the team.”

And, Morgan played a significant part during the build up to the winning goal. The Kilruane defender had performed superbly throughout this final, but late on Cork's Brian Turnbull, his man, had managed to score a vital point. Craig Morgan, however, shook off that disappointment, won possession and sparked the move which culminated in Jake Morris' winning goal.

Next up for Tipperary is an All-Ireland under-20 hurling semi-final against Wexford - the Model County narrowly lost the Leinster final to Kilkenny (0-18 to 1-17) while they also beat Offaly (2-20 to 1-18) en route to that provincial decider.

The semi-finals (Tipperary v Wexford and Cork v Kilkenny) are expected to take place on the week-ending Sunday, August 4 - the date, time and venue remains to be confirmed. The All-Ireland under-20 hurling final is scheduled to take place on August 24-25.

And, Craig Morgan realises that a huge challenge now lies ahead of the Tipperary team: "The All-Ireland (series) is a new championship. We have to enjoy winning the Munster final, but we have to go again. We know what's coming ahead of us. Wexford are a good team - they gave it to a strong Kilkenny side so they are coming with a vengeance; they will want to win this as well. It's wide open for any of the four teams. It's a new championship. We need to re-start now and go again”.