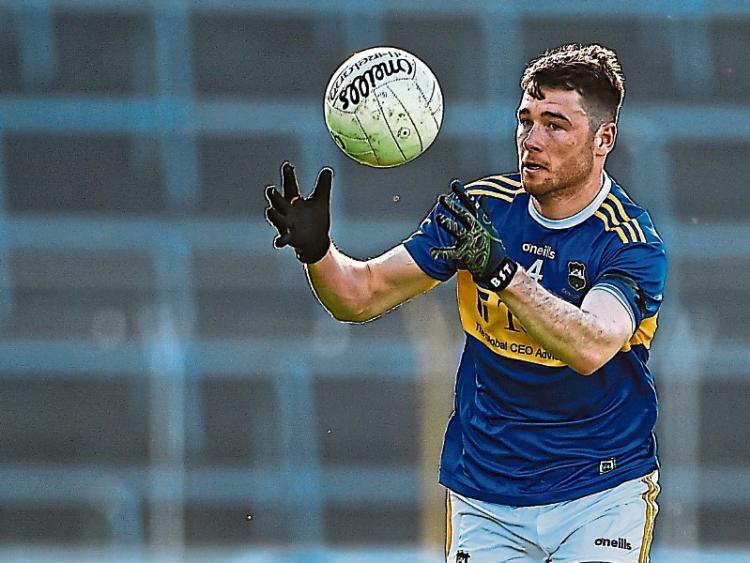 Tipp senior Shane O’Connell was one of Golden’s stars in their comprehensive win over Clonoulty/Rossmore in the West Intermediate Football Championship.

Golden/Kilfeacle, holders and beaten county finalists in 2018, are through to this year’s Shane Hennessy Agri Advisor West Intermediate Football Final. A very strong first half showing from the holders laid the foundation for this victory. Their full forward line, in particular, caused all sorts of problems to Clonoulty and goals from Brendan Moloney and Ronan Hayes in the ninth minute set them on the road to victory.

Keith Landy kicked two points for Golden in the opening seven minutes; either side of a Jimmy Maher converted free for Clonoulty to give them an early lead.

Disaster then struck for Clonoulty in the ninth minute, with two goals for Golden, the first coming from Brendan Moloney following a good run. The second came immediately from the kick out when a ball came back off the upright and Ronan Hayes was first to react, drilling a powerful shot past Will Ryan in the Clonoulty goal. Ryan had earlier foiled a Golden move with a brilliant save from close in.

Hayes and Josh Keane added points before a second Brendan Moloney goal after 18 minutes put Golden into an unassailable lead. Mickey Ryan (Winnie) converted a Clonoulty free but points from JJ Byrnes, Seanie O’Halloran and Shane O’Connell had Golden in a commanding lead at the break, Golden/Kilfeacle 3.9, Clonoulty/Rossmore 0.2.

After the break, Golden continued their dominance, with the Clonoulty attack unable to penetrate their tough tackling defence. Brendan Moloney completed his hat trick on fourteen minutes when he goaled from close range, and points from Derry Ormond, Keith Landy, Kevin Hally and Josh Keane ensured victory and a place in the final, where they will meet Rockwell Rovers.

Golden had stars all over the field, Daithi Bargary, Shane O’Connell and Andy Byrnes in defence, but it was their attack that shone on the night with Ronan Hayes, Brendan Moloney and Keith Landy catching the eye.

Clonoulty for their part, though outclassed, never gave up. Will Ryan pulling off a couple of wonderful saves. James Ryan (Winnie) and Martin Ryan (Ned) tried hard to thwart the Golden attack, while Denis Murphy, Jimmy Ryan (Con), Aidan Loughman and Aaron Ryan (R) gave their all.