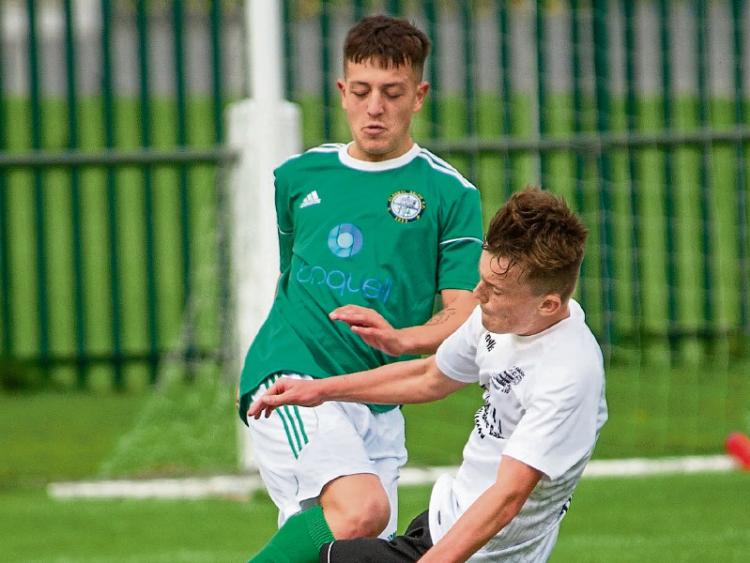 Wilderness Rovers made it two from two in the First Division when they overcame their Town rivals in an exciting eight goal thriller on Sunday morning in Clonmel.

The game was a rip roaring affair from the start and the home side took the lead early on after some lax defending by the ‘Wildies’. But Rovers response was positive and they levelled the game shortly afterwards when Sean Browne scored  with a rasping effort.

The home side made the better start when the teams came out for the second half. A long range effort put Town back in front, but again the visitors responded quickly and confidently with a  Shane O’Meara  equaliser.

Sean O’Hara is proving to be a huge acquisition for Rovers already this year and he scored two goals in quick succession to put his side in control of the game midway through the half, before Town pulled one back.

The spoils were to go back to the Fethard Road however when Sean Browne got his second and his side’s fifth.

This was Slieveardagh’s first home game of the new season, and conditions couldn’t have been better for the visit of Cashel Town.

Both teams were cagey in the opening encounters, but the visitors took the lead when Michael McDermott’s free kick deceived Darren Kelly in the goal.

The home side got themselves a foothold in the game and started to create chances, and Tony O’Brien’s movement and shot across the keeper got the hosts back on terms on the half hour mark.

With half time approaching, Cashel were awarded a penalty following a clash that left Kelly unable to continue, and Tony O’Brien took the gloves but wasn’t able to stop James Harding’s resulting spot kick.

The second half showed more intensity than the first, with Cashel willing to absorb the Slieveardagh pressure and try to attack on the break. Slieveardagh kept trying to get that elusive equaliser as the time ticked away, but were undone with eight minutes to go when Cashel were awarded a second penalty, and Harding once again beat the keeper.

Villa welcomed Old Bridge to the Tower Field on Sunday on a lovely day for football but struggled in the early stages as they found it difficult to put together chances against a stubborn Old Bridge side.

The game was mainly played in the middle of the park and there were no chances of note that troubled either keeper in the first 45  minutes.

The second half began in same manner as Villa pushed on looking for the opening goal while the visitors relied on long balls on the counter attack to their speedy forwards. After a number of corners and with Villa camped in the Bridge area, a long clearance wasn’t dealt with by the home defence and Old Bridge punished the mistake to go a goal up with 25 minutes left to play. The home side spent the rest of the game pushing for an equaliser but some poor finishing and final balls into the box frustrated on many occasions. After a number of corners, in the final minute they eventually found an equaliser, with Eoin O’Dwyer pouncing on a loose ball in the visitors box to level the game.