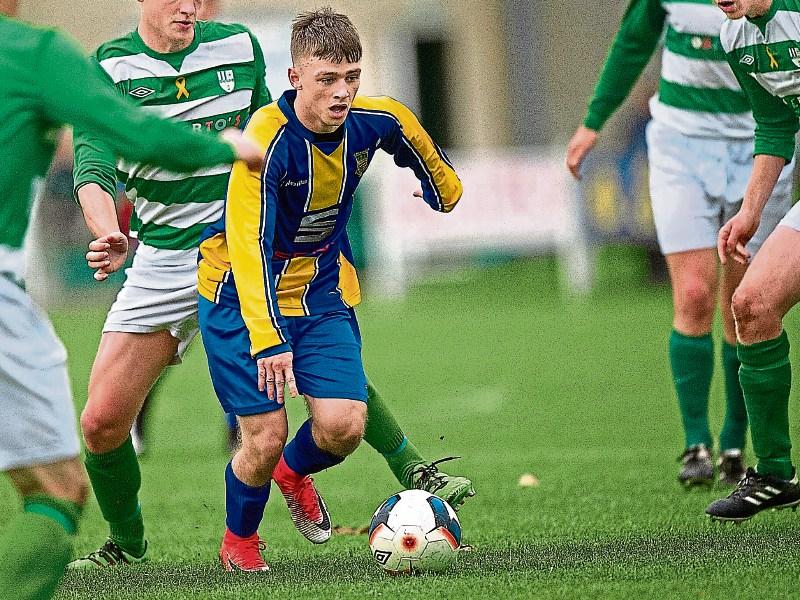 Willie Armshaw who came off the bench to score the only goal in last Saturday's FAI Junior Cup final at Deasy Park, Galway.

Tipperary Town side St Michael’s have been at the top table of Irish Junior football for well over two decades now, but even though they beat Dublin side Sherriff YC in the semi-final of their winning run in 2014, it was always a niggling piece of sand in their shoe that they never got the better of the other big beast in a showpiece final.

That hoodoo was laid to rest on Saturday last in Eamon Deacy Park in Galway when the Tipperary side struck late and decisively to win their third blue riband and their second in five years, with a goal that would grace any game scored by Willie Armshaw.

Sixteen weeks waiting since they put Donegal side Glengad United to the sword, there loomed the late danger that the game might be postponed again when the west of Ireland ground was battered by torrential rain on Friday evening, but by 2pm on Saturday the sun was shining and the Saints followers were out in force.

What they witnessed was what they had expected, a very tight, tense cagey affair with neither side willing to over-commit in the early stages for fear of being out of the tie before it had even begun.

Midfield and defences were on top in the first half with whatever creative spark on display in the game, more often than not coming from the silky feet of wing wizard Jimmy Carr, who followed up his man of the match performance in the Aviva five years ago with a second one in Galway.

Behind Carr another veteran of that battle Paul Breen partnered new boy Sean Guerins in defence to shut out whatever attacks that the Dublin side constructed against the Saints.

Breen’s then-partner in the Aviva, James ‘Chalky’ Walsh was still taking a general’s role in directing play, this time however from the line as he added winning coach plaudits to his winner player’s ones.

The best chance of a breakthrough finally arrived when Carr was taken down in the area and the referee had no hesitation in pointing to the spot. However the Sherriff keeper Lee Murphy faced down Joey Mulcahy and produced a brilliant save to keep the tie level.

Time was running out when James Walsh made the decisive substitution and brought Willie Armshaw on the pitch. Though looking like a schoolboy, Armshaw is more akin to that term that Ole Gunnar Solskjear carried in Barcelona 30 years ago of baby faced assassin, and with seven minutes left he was the beneficiary off a beautifully swept pass from Shane Ryan, out in front of him as he galloped up the left wing. Without breaking stride he took on the right back who thought he had bested Armshaw by getting his toe on the ball and flicking it up of his toe and into the air. All that did however, was give Armshaw the chance to hit the ball on the full volley and he gave Murphy no chance of saving a shot that flashed across the goal and into the net, to the delight of the huge travelling support.

The Dublin side seemed shell shocked by the goal and their hopes of getting back into the game were hampered further when Leon Hayes saw red for an unnecessarily nasty tackle on Colin Bargary, and minutes later the referee signalled the end of the game to wild celebrations.

It’s been a long and arduous road, but the Saints won’t care. Once again they sit at the pinnacle of their kingdom, marching in with that huge cup that is the centrepiece of another fantastic season for the club and all associated with it.