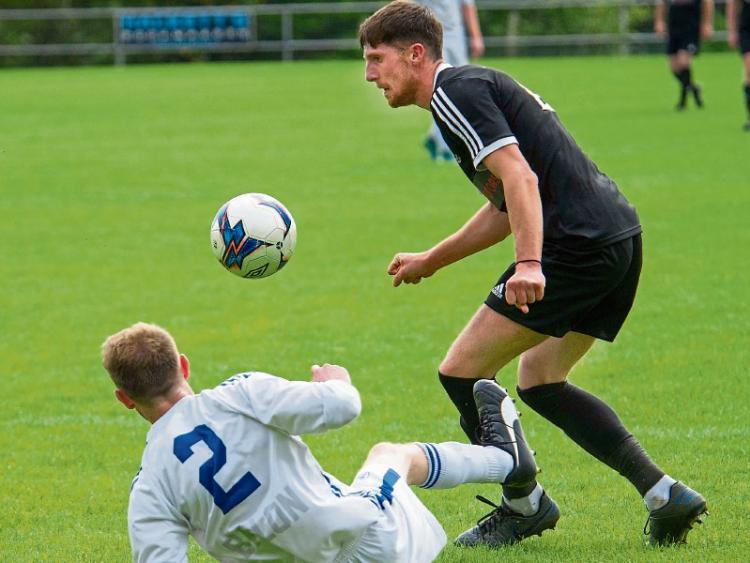 A man for all seasons. Recent All-Ireland senior hurling winner with Tipperary, Ger Browne, lined out for Rosegreen Rangers in their win over Cashel Town on Sunday last.

After winning their first two games back in the Premier League after last year’s promotion, this game was seen at Borris’ first real test as they faced up to Clonmel Celtic, but they more than passed the exam and perhaps raised a few eyebrows across the league with what was a commanding performance, dominating the game   from the start.

Proceedings was only five minutes old when the scoring was opened after man of the match Kieran Hennessy forced a brilliant save from the Celtic keeper, only to see veteran goal poacher Barry Ryan pop up and fire home from close in to score for the second consecutive week.

This settled the home side and they controlled the ball thereafter, adding to the scoresheet in the 15th minute when Hennessy got his first of four for the afternoon beating the visiting keeper with a splendid long range effort.

Celtic did try to get back into the game and were awarded a penalty kick in the 25th minute which was despatched by Conor Acheson, but the home side regained their two goal lead ten minutes later when Hennessy fired in another goal from just inside the area.

Well in control at this point Borris practically ended the game as a contest when they scored a brace of goals in the final two minutes of the first half through Hennessy completing his hat trick and Jamie Carey popping up with another poacher’s effort to leave the score at 5-1 when the referee blew for the break.

The second period was a much more pedestrian affair with a shell shocked Celtic rarely looking like threatening to get back into the game, and the home side added two more goals late on to give themselves a very comfortable win.

They are now three for three this season and sit on top of the Premier League, and will be oozing with confidence right now .

Peake Villa finally got their Premier League campaign off to a start with a win on Sunday against newly promoted Glengoole United in a game where the Thurles side were always a little bit more comfortable than their opponents even if it took until the second half to score.

The game was a dogged affair for long period of the first half with both sides creating some chances but nothing that looked like it had the quality to open the scoring.

That finally happened ten minutes into the second period when Villa caught out the hosts with a long ball over the top that was snapped up by Ronan Maguire who slotted home past the outrushing United keeper.

This setback forced Glengoole to push on more in search of an equaliser and twice they were caught on the hop inside four minutes when Mikey Wade and Kevin Paton added goals for Villa.

Stuart Hanrahan did pull one back when he scored from a corner kick with ten minutes left but it wasn’t enough to make any difference to the final scoreline.

Last Sunday St Michael’s were basking in the glow of being crowned the top Junior football team in Ireland, but seven days later they were happy to escape with a win as Cahir Park brought them down to earth with a bang on their return to TSDL football at the weekend.

The game was a dour struggle right throughout the first half with the home team showing signs of legginess after the massive effort they put in in Galway, and when they did manage to break through the Cahir lines they found the visiting keeper in inspired form throughout a first half that finished scoreless.

The second half was only slightly better when the Saints beginning to create chances which at times failed to come off more out of anxiety to get a goal than working it patiently as they have done so often in the past. The breakthrough finally came just after the hour mark and when it did it was a goalmouth scramble that was eventually poked over the line by Ollie O’Driscoll, after David Slattery had forced a close range save

But far from having the goal settle them down, Saints were hauled back to level terms almost immediately when Cahir were awarded a penalty kick that former Saints youth, Alan O’Donnell,  made no mistake with.

Saints got a bit frenzied as they sought a winner and just when it looked like the Park would hang on for a point, in the sixth minute of stoppage time, Colin Bargary picked out Deacy Park hero Willie Armshaw, who crossed from the end line for Gavin Dillon to score  from close range.

Cahir Park will emerge from this game with much credit but Micheal’s will be happy to have secured the win and remain joint top of the league after three games.

Celtic Town made it two wins from two on Sunday afternoon thanks to an excellent 4-0  win over Bansha Celtic. They hit the ground running and were in front after 12 minutes when the in-form Luke Kiely intercepted a pass inside the centre circle and he slipped in Sean O’Connor who curled his shot into the top corner.

Two minutes later it was two thanks to Dylan Guiry’s lung bursting run from deep and shot which although saved dropped nicely to Sean O’Connor on the edge of the six yard box to tap home.

The visitors began the second half brightly and applied some early pressure which Town were able to soak up with Kelly, Guiry and Healy able to answer every question asked of them. Luke Kiely made the game safe with a third in the 64th minute when for the second game in succession unleashed a left foot shot from outside the box which gave the keeper no chance.

Ten minutes later Kiely was at it again when his pinpoint cross evaded everyone and curled in the bottom corner to finish off a great day for his side.