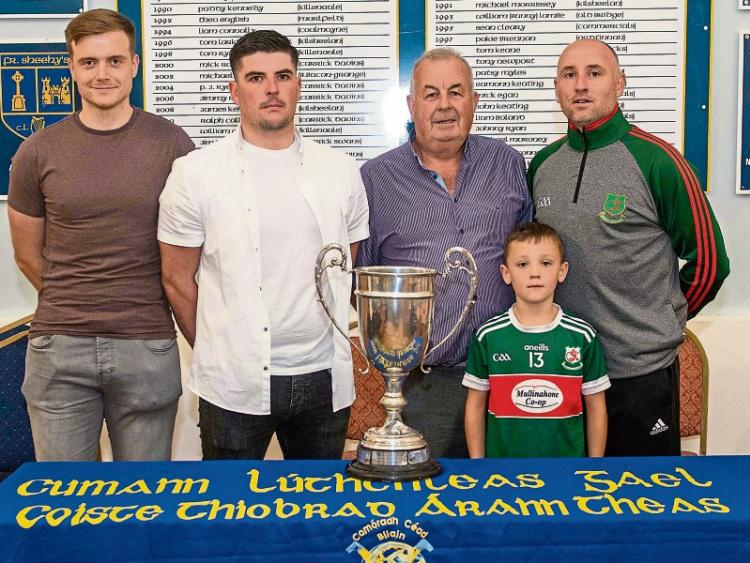 THE SHOWPIECE of the South Tipperary GAA Board’s hurling calendar goes ahead on Sunday next at Clonmel Sportsfield at 5 pm when Carrick Swans and Mullinahone clash in the Clonmel Oil  Senior Hurling Championship final. (Referee: Michael Kennedy).

The South title is a prize that either side would greatly welcome with both  currently in the process of re-building having lost their  top flight senior  status last year.

The Divisional crown always means a great deal to all five competing clubs in the South but with both Swans and Mullinahone now playing in Roinn II of the County Championship, success on Sunday will give the winners a crack at the Dan Breen Cup via a preliminary quarter-final.

Carrick Swan, last champions in 2017, pulled off a great win in the semi-final when overcoming Killenaule at Clonmel Sportsfield. Mullinahone, on the other hand, proved too strong for near-neighbours Ballingarry in the other semi-final. Both are in the decider on merit.

Speaking at the launch at the GAA Centre on Saturday night last, Mullinahone captain, Eoin Kelly, a hurling legend who has won so much over a glittering career, still sees the great sense of worth in a South Senior Championship title when I asked him did it mean as much now as ever.

“It definitely does. For any of the teams in the South championship that is always the goal at the start of the year to try and get to a South final. We were desperately disappointed last year to get to the final and be beaten and not perform and all that. We are there now again so hopefully we can perform and see where that takes us.

“We lost a few players  last year and one or two of us are still hurling away, myself and Paul Curran, and trying to pass on a bit of experience to the younger lads and that. We have a very young team and for a lot of them it will be their first South final. We are trying to develop lads and bring them on -  keeping  them interested is the thing.

“We are going well enough this year. We played Ballingarry, once in the Seamus Ó Riain and once in the South Championship, and they were two good wins there. But if you look at Carrick Swan and where they are coming from they seem to be on the up with all their under 21 success and seem to be coming through. They won the South final two years ago and they have a nice blend and they are well experienced now. They had a great win against Killenaule and then they beat Thurles Sarsfields the week after so they are coming nicely into the South final and they seem to be coming into form at the right time with some big wins under their belts.

“I think it’s hard to win any decent silverware for players going through their career and especially when you are coming towards the end - if you can get your hands on anything it’s precious. But last year was disappointing the way we played in the final we really didn’t get going at all and you’d be hoping that this time round you can perform and see where it gets you because Carrick Swan have the momentum with them coming into this game next weekend and they’ll be chomping at the bit,” concluded the Tipperary All-Ireland captain of 2010.

Carrick Swans joint captains Kieran Lonergan and Damien McCarthy also attended the South Board Final launch and one could definitely sense a serious focus in the Swans approach to their hurling this year after their disappointing 2018.

“Last year was a poor enough year for us and we got relegated from senior A but we got back together late October and put a plan in place. We got back in the gym in December, working on our fitness. There has been a big change in the team this year. It has been all about building a team together, getting the minors in with us, building for the future, going forward. It is about getting back to where we want to be, contesting South finals and getting back up to Senior A. The long-term goal is to get back up into Senior A,” he said.

The other joint captain, the long-serving  Kieran Lonergan added: “We have a strong panel with 20 or 22 lads gunning to get on to the field. About 70% of our team is under the age of 25 and we have no fear that anyone who gets on the field will do a job for us. But we also know that the South Championship is a tough championship to win and there is only a puck of a ball between us all.” he added.

Reflecting on the important win over Killenaule in the semi-final Kieran added.

“In the first 15 to 20 minutes they outscored us 8 points to 3 and after that we kind of got used to their tactics coming forward - Killenaule always bombard you with tactics early on - before we figured what was happening. We outscored them 1-14 to 0-8 over the next 40 minutes so we were happy with that.

“We were back training in early January and our fitness really came through in that Killenaule game. We delivered in the last 15 to 20 minutes and that is down to the professional approach with our fitness guys.

“Kevin O’Sullivan is with us from Cashel King Cormacs and he is doing an absolutely fantastic job with us and is really rallying around us. We had to bring him back after a bit of a lull year last year and he is after regrouping us.

“This is my eighth year involved in the senior team and I don’t think I have ever seen a senior team more buzzing. We are buzzing at training, even for the tough training sessions. That’s where it is now and hopefully we  have another 6-8 weeks hurling ahead” he concluded. 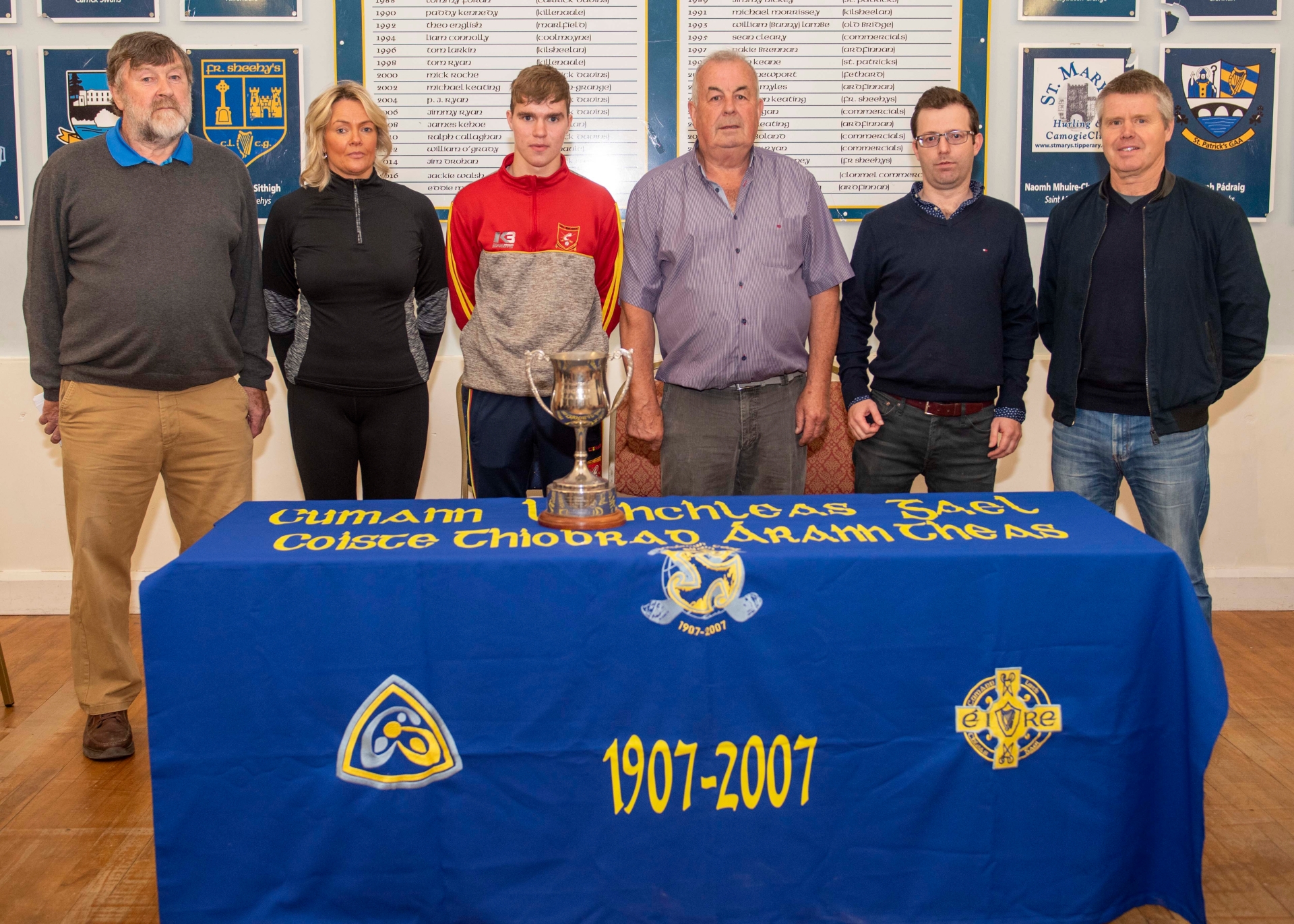 At the launch of the Clonmel Oil South Tipperary Minor B Hurling Championship final to take place at Clonmel Sportsfield on Sunday next between Kilsheelan/Kilcash and Killenaule were from left to right: Noel Byrne (South Board treasurer), Eleanor Lahart (secretary, Killenaule), Darragh Fitzgerald (captain Killenaule minors), Hugo Browne (South Board chairman), Tadhg O'Connell (South Board PRO), Liam Fitzgerald (Killenaule Minor Manager). The minor ‘B’ final, Killenaule v Kilsheelan/Kilcash will take place at 3.15 pm on Sunday at Clonmel Sportsfield and is a curtain-raiser to the senior final between Carrick Swans and Mullinahone at 5 pm.