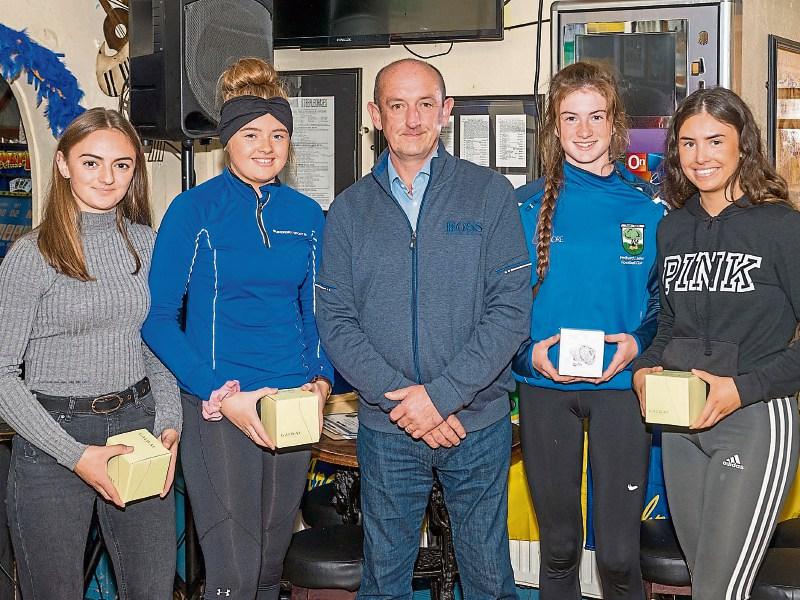 The August winners for the Butlers Bar Fethard Sports Achievement Awards were announced at a special presentation function on Friday night, September 6.  This month’s awards were sponsored by Murphy Candles, Cahir, represented on the night by Nicky Harding who presented the awards.

First award of the night ‘Mentor of the Month’  was was won by Jimmy Smith, who has worked with the Juvenile GAA Club and Community Games for the past six years, building a young team that has succeeded at all levels.

His major achievement was coaching the Fethard & Killusty U12 Boys Soccer team to win the County and Munster finals, and going on to the National Community Games finals where they were narrowly beaten by Cavan in the final. This superb team, All-Ireland silver medallists, really punched above their weight at all levels thanks to the coaching Jimmy Smith.

The August overall winner was won by the five young Fethard ladies who played on the Tipperary U17 Gaelic Football team that won the All Ireland title – Alison Connolly, Nell Spillane, Carrie Davey, Niamh Hayes and Leah Coen. The competition took place over a weekend in Abbotstown and Tipp won all seven matches.

Nominations for the September award are now being accepted at Butler’s Bar or by any member of the selection committee.