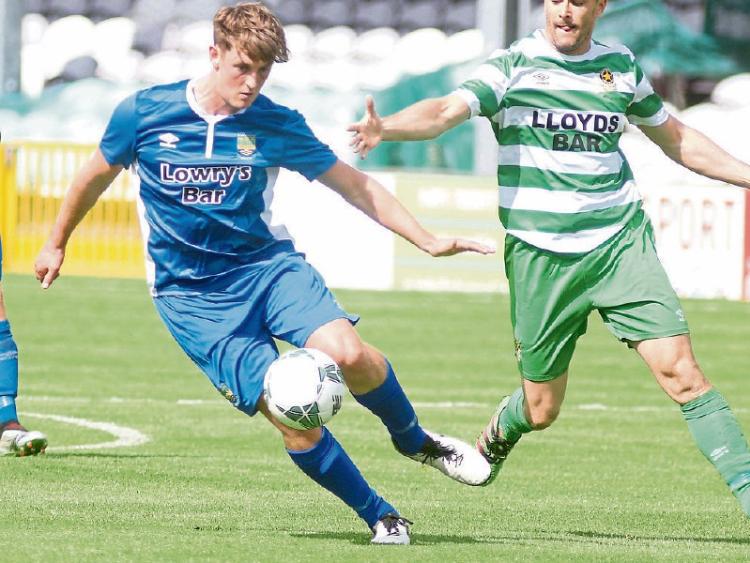 Shane Ryan who scored St Michael's third goal in their 3-0 win over Enniskillen Rangers in the President's Cup final at the weekend.

It was a long way from Tipperary for FAI Junior Cup champions as they made the torturous trip to Fermanagh to take on local side Enniskillen Rangers in this year’s President’s Cup, the second year of a competition that pits together the Junior Cup champions North and South of the border.

The home side were also in this final last year when they fell to FAI champions North End of Wexford, and began the day hoping that they might see victory at the second time of asking.

However they came up against a Saints side that was bang in form and completely committed to bringing as much silverware to Cooke Park as they can this year.

The visitors started the brighter and troubled the Rangers a number of times in the early moments. The home side were committed to playing a high line in defence and caught out the Michael’s front line on a number of occasions, but they were also giving themselves very little margin for error if the line broke down.

Going forward the Northern side were best served by Chris Currie and Jasom Keenan, but they too probably haven’t come up against a back line as mean as the Saint’s in a long time and were made to work hard for any scraps they could root out. Olly O’Driscoll did well in the 23rd minute to get in behind the defence but his shot was deflected out for a corner kick. Shane Ryan took the corner and when Gareth Barbour lost the ball in the air, Sean Guerins was on hand to head to the net and put the TSDL side into the lead. Five minutes later the home side had a good chance to bring the game back level when Conor Watson set up Mark Cutler, but the strikers shot was weak and easily held by Aido Walsh in the Saint’s goal.

The half concluded with Saints good value for the one goal lead, as the home side looked to be running out of ideas with the Tipperary side continuously probing for chances to go forward and strike.

The second half began in a pattern much the same as the first with the visitors enjoying the better of the possession and chances as the home side found it hard to break down the very strong Saint’s midfield and backline. Michael’s should really have doubled their lead just before the hour mark when the double act that got the winning goal in Galway two weeks ago were at it again, with Shane Ryan feeding Willie Armshaw, but this time Armshaw’s strike couldn’t find the target and went high over the crossbar.

The home side were beginning to flag as the game entered the last quarter and Saints doubled their lead with 17 minutes to play when Shane Ryan picked up a ball on the right channel, turned inside and played a delightful ball through for Gavin Dillon, who lobbed the advancing Gareth Barbour to the delight of the travelling supporters.

As they are want to do, the Tipperary side took complete control of the final stages, playing keep ball against their increasingly frustrated opponents, and with the game entering the third minute of stoppage time, Shane Ryan pulled on a ball on the left wing and it flew past Barbour and into the roof of the net to make it three nil and game over.

Champions of All Ireland now, this title is historic for the club from behind the Church, and they will savour it for the next twelve months.

That said, it will probably only whet their appetites to win the Junior Cup again and bring this spectacle back to their own patch in Tipperary Town. It would be a brave man that would bet too much against that happening.