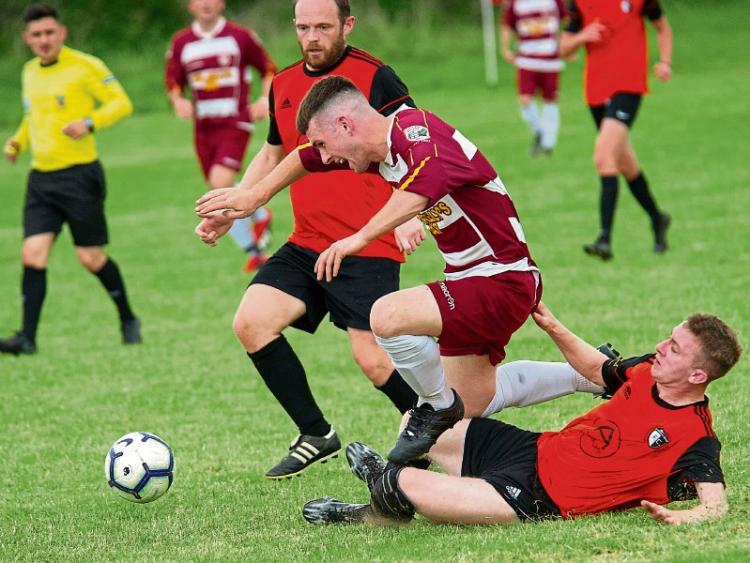 Honours even in a game that had plenty twists and turns on the Arra Road last Sunday, as the two sides who were relegated to the First Division at the end of last season try to make an immediate return to the Premier League.

The Bridge went ahead early when Steven Guiry cut in from the right and hit and unstoppable shot passed Dean Morrissey in the town goal, in the 12th minute.

At the other end Jamie Malone was causing the visitors all kinds of problems and got his reward with a well taken equaliser only four minutes later.

But it wasn’t long before the visitors got their noses back in front when the home defence stopped expecting an offside call, and Kyle Ryan but took full advantage to lob home from 30 yards out, midway through the half.

The home side responded well and in the thrity fifth minute, some good work from Andy Russell and Darren Neville found Matty Moroney who nutmegged his marker and made no mistake finding the bottom corner to level the game at the break.

The second half lacked a little quality and intensity of the first and with the home side pushing on for a winner the Clonmel side looked to remain dangerous from any potential counter attacks.

But it was Tipperary Town who went 3-2 up when a deep cross from Andy Russell was headed back across goal by Matty Moroney and then slotted home by Russell Bowes 20 minutes from the end.

Three minutes later however good work down the right saw the ball crossed to Kyle Ryan who hit a sweet finish to the bottom corner and level the game for the fourth time.

Both teams had chances to win the game in the dying minutes but it ended in what was probably the fairest result of the day, a draw.

Cashel Town welcomed Wilderness Rovers to Palmershill on Sunday in what was an early season top of the table clash that both sides were hoping would allow themselves to put a stamp on their promotion prospects over the coming season.

And what the large crowd witnessed was a real game of two halves with the home side bossing proceedings in the early part of the game. However they did squander a lot of good opportunities and really should have been further ahead by the time Sean McCormack did find the net with a sweet volley on the half hour mark.

This was the only goal of the half but when they went in for the break the visitors looked to be in real trouble.

Whatever was said at half time though rallied the Wildies and they were in charge throughout the half, deservedly getting an equaliser eight minutes from time when the evergreen Seanie O’Hara cut open the home defence and slammed the ball to the net.

Cashel did try to come back, and hit the crossbar twice in the final three minutes, but by the time the whistle went both sides were good value for their point.