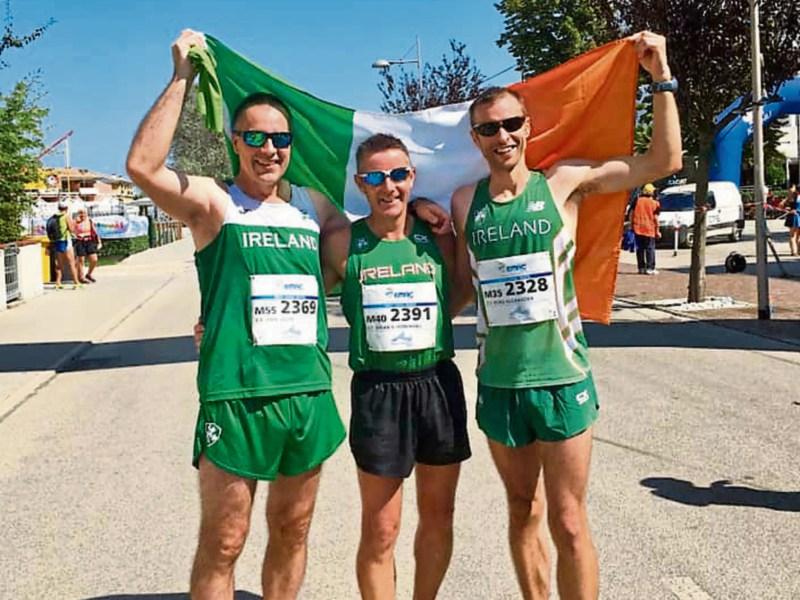 Earlier this year due to injury John was unable to run but it did allow him to race walk and he took to this new event with great enthusiasm. Since then he has mastered the art, getting valuable tips from Frank Lynch, the club’s highly respected race- walking coach.

John has competed in a variety of distances since then from 3k Indoors to recently race walking the Boston Scientific Half Marathon in Clonmel in 2 hours 13 mins 11 secs, averaging 10 minutes per mile. He then turned his attention to the European Masters Championships in Italy, competing in two events, the 10K and 20k Walks.

The 10K was first event and here he was competing over 55 but was part of the Irish over 35 team that also included fellow county man, Ross Alexander of Coolquill AC and Brian O Domhnaill of Finn Valley.

This was John’s first time competing at this level and initially he struggled with the technique in what were very warm conditions. In the early part of the race he incurred 2 red cards, a 3rd red card and he would be disqualified. He was under pressure as the other two members were going very well and at halfway Ireland was in 3rd place in a very competitive team event, just behind the highly rated Spanish and Italian teams.

John responded very well to such pressure as he adjusted his technique and walked the remaining distance in near perfection, picking up no more cards.

The results weren’t announced until all the athletes had finished and all the judges reviewed the race and all the cards were recorded. There was great jubilation among the Irish squad and followers when it was announced that the Irish 0ver 35 team had won the bronze medals.

Then later in the week more European medals for the small band of race walkers taking part when the Irish team of Ross Alexander, Brian O’Domhnaill and Sean McMullan of Mullingar Harriers won the over 35 Gold team medals in the 20k event, capped off by Ross Alexander winning the Individual Bronze medal over 35.

In this event John performed very well in  trying conditions when crossing the finishing line in 2 hours 27 mins with only one red card.

John enjoyed the whole event and having got a taste of this kind of competition will be aiming for more in the months and years ahead.

Thanks also to Susan Laste for the regular updates at these championships and for the many photos.