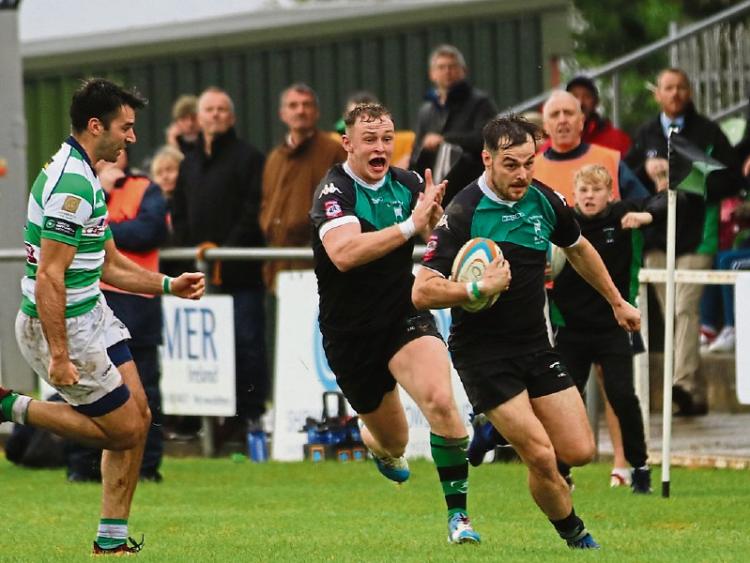 Clonmel’s Luke Hogan, supported by Andrew Daly, heads for the line in the game against Omagh

It was a huge, long-awaited day for Clonmel Rugby Club when they played Omagh in their opening game in the All-Ireland League at Ardgeeha on Saturday afternoon.

And even though the weather might not have helped matters on what was a wet day, the stand was packed to the rafters, the crowd eagerly awaiting Clonmel’s first-ever fixture in senior rugby.

As they made their senior rugby debut, Clonmel followed in the footsteps of fellow Tipperary clubs Cashel and Nenagh Ormond, who are also playing in the All-Ireland League.

Clonmel’s U-11s marked this historical occasion as they cheered and clapped both teams onto the pitch, and before we knew it, Clonmel’s senior rugby campaign had begun and history was made for the club.

Clonmel showed early dominance and they were camped inside the Tyrone side’s 22. But Omagh spotted a gap and went the length of the pitch to score a quick tap penalty, following some silky hands and offloads. Clonmel found themselves seven points behind after five minutes.

It was tit-for-tat in the next 15 minutes and a missed Omagh shot at goal gave Clonmel a lifeline back into the game.

Dylan Cadogan then made a break from inside his own 22 and just as he was about to give the killer pass an Omagh man knocked the ball on, which was deemed to be deliberate, and he duly received a yellow card.

Clonmel pressed this advantage and around two minutes later Martin Altamirano got on the end of a rolling maul to get the touchdown and Clonmel were right back into the game, 5-7.

Once again both sides exchanged blows until Dylan Cadogan nudged Clonmel in front with a penalty on the stroke of half-time.

Clonmel not only matched the seasoned Omagh side but actually led them at the break. It was a great start and they were hopeful of continuing their flying form.

Clonmel asserted their physical dominance over Omagh in the second half, the Ulster men unable to deal with them at scrum time and in mauls. Yet it was Omagh who took the lead through two penalties.

Clonmel responded really positively and, once again, found themselves camped inside Omagh’s 22. It took a lot of graft and toil, but eventually Clonmel found Luke Hogan in space in a wide channel and he had too much gas for the covering winger in scoring the home team’s second try.

The score was 13 apiece heading into the final few minutes and Omagh, through supreme game management, found themselves in a drop goal position. However the shot  fell just short and the game ended all square.

Both sides probably felt they should have won the game.

Overall it was an impressive display to start their senior campaign, and Clonmel will not be intimidated by any team going forward.

Clonmel are away to Sundays Well this Saturday, and will be hoping for a similar display.