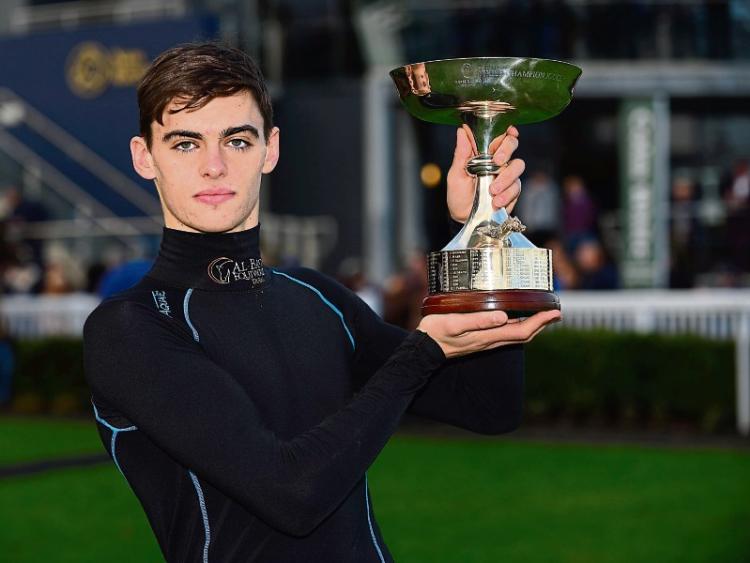 In a season that saw two jockeys record a three-figure tally for the first time, Donnacha O'Brien was once again crowned Irish champion jockey at the Flat season finale at Naas on Sunday. The 21-year-old retains his title in a year when he added to his Classic haul in the QIPCO 2,000 Guineas on the Aidan O'Brien-trained Magna Grecia.

At home, Donnacha won the Group 2 Beresford Stakes on his father’s Innisfree and the Group 2 Kilboy Estates Stakes on Red Tea, trained by his brother, Joseph.

The apprentice championship went down to the very last race of the season at Naas and success on the Dermot Weld-trained Maria Christina saw Oisin Orr, who rode two winners on the day, draw level with Andrew Slattery to share the spoils with 43 winners each. It was a second apprentice crown for the County Donegal rider and a first for 18-year-old Slattery who hails from Killenaule. Both jockeys rode their first Group race winners this season and they finish clear in the table from last season’s champion Shane Crosse and Ben Coen, a cousin of Slattery’s. In 2010, the apprentice title was shared by Joseph O'Brien, Gary Carroll and Ben Curtis.

For the 22nd time in his remarkable career, Aidan O'Brien was crowned champion trainer. The Ballydoyle maestro, who turned 50 last month, won the Tattersalls Irish 1,000 Guineas with Hermosa and the Dubai Duty Free Irish Derby with Sovereign and enjoyed further success with Magical whose Group 1 haul included the Tattersalls Gold Cup and the QIPCO Irish Champion Stakes. Fairyland and Love, winners of the Derrinstown Stud Flying Five Stakes and the Moyglare Stud Stakes respectively, were other domestic Group 1 winners for the Ballydoyle trainer.

Eight years after he became the youngest jockey to win a Breeders' Cup race, Joseph O’Brien rewrote the record books once again when he became the youngest trainer to enjoy success at the annual Breeders’ Cup extravaganza when Iridessa won the Filly & Mare Turf at Santa Anita on Saturday. She was the only European-based winner at the meeting, recording her fourth top-level win and giving a first Breeders' Cup victory to jockey Wayne Lordan. O'Brien became only the second person, after Freddy Head, to ride and train a Breeders’ Cup winner.

Shane Crosse reached the 30-winner mark when landing the 8f fillies’ maiden on the Joseph O'Brien-trained Thundering Nights at Galway on Bank Holiday Monday. The 14/1 chance finished with a flourish to beat 4/7 favourite Mazara by half a length.

Fozzy Stack was a winner at the final meeting of the year at Galway on Bank Holiday Monday where Meaningful Vote scored a surprise success in the 7f nursery handicap. The 33/1 outsider of the 12-runner field, the Anthony Cullinane-owned juvenile flew home under Conor Maxwell to pip the Joey Sheridan-ridden Dragon Of Malta by a head. Andrew Slattery went two winners clear of Oisin Orr in the race to be crowned champion apprentice with success on the Gavin Cromwell-trained Yafordadoe in the 7f handicap. The 9/1 chance beat Denis Hogan’s Conversant by two lengths, another runner-up spot for Joey Sheridan. Sheridan landed a winner when the Shane Ryder-trained A Few Bob Short took the opening division of the 12f handicap. The 11/2 chance gave the Hollyford apprentice his 18th winner of the season.

Donnacha O'Brien all but secured his second jockeys’ championship when winning the second division of the same race on Grace To Grace, a second winner at the meeting for his brother Joseph who was also successful at Wexford on the day. With the title safely in the bag, Donnacha added to his tally at Dundalk on Wednesday night. He rode two more winners for his father Aidan, the pair taking the opening 5f maiden with 2/7 favourite Yale and the 7f maiden with Vatican City, a 1/2 favourite. The Ballydoyle trainer made it three on the night when taking the 12f handicap with 12/1 chance Tracing which was ridden by Seamie Heffernan.

Joey Sheridan enjoyed a wonderful season and brought his tally to 21 winners when sharing a double with Denis Hogan. Yuften came good again in the 8f claiming race, the 15/8 favourite getting on top late on to win by half a length from the Ger Lyons-trained Merricourt. Both horses were claimed subsequently, with the winner heading to the Noel Kelly yard and the runner-up going to Scottish trainer Iain Jardine. Lady In Lavender completed the brace with a narrow success in the 8f handicap. Owned and bred by Conor O’Brien, the 10/1 chance battled well to score by a nose from 2/1 favourite Latchet with Munaajaat a neck away in third place.

Rachael Blackmore landed a double over fences at Clonmel on Thursday. She was seen to great effect on the Gordon Elliott-trained Tintangle which went badly to her left on the run in before beating The Caddy Rose by two and a half lengths in the mares’ chase. It was a little easier for the Killenaule jockey who landed the handicap chase on Henry De Bromhead’s Kavanaghs Corner. The 4/1 shot had a little in hand when beating Steer Clear by a length and a quarter.

Blackmore was in double form again at Cork on Sunday where she shared an opening race double with Henry De Bromhead. Tiger Voice was a very good winner of the 2m maiden hurdle, justifying strong market support when scoring by two and three-parts of a length from the Joseph O'Brien-trained Arthurian Fame. He was returned the 9/4 favourite and enjoyed the same margin of victory as 4/6 favourite Minella Melody which had lads in hand as she won the mares’ maiden hurdle in the colours of Kenneth Alexander. The latter heads to Punchestown next month for a new listed hurdle race.

Killenaule apprentice Gavin Ryan brought his tally for the season to 17 winners when winning the 5f handicap at Dundalk on Friday on May Remain. The 8/1 chance won by a length and three quarters from Ty Rock Brandy, the 5/2 favourite.