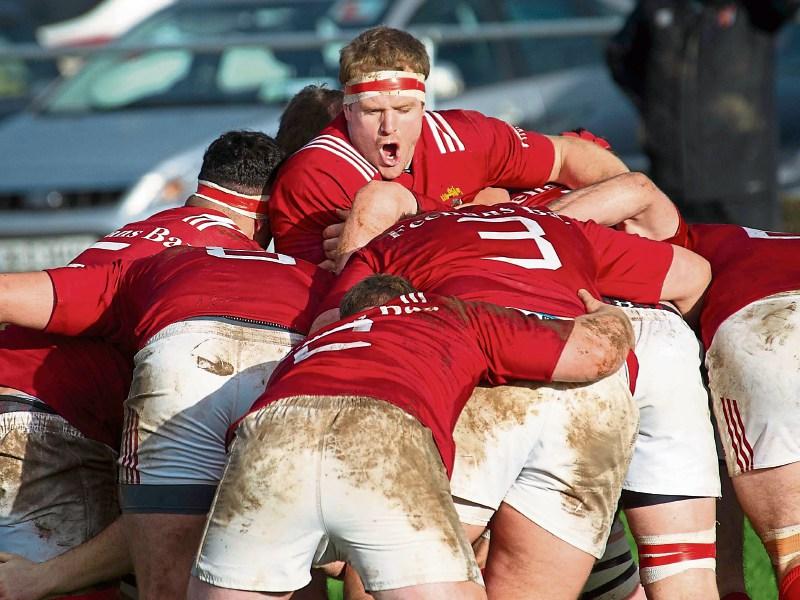 James Ryan and the Cashel pack

ALL IRELAND LEAGUE DIVISION 2A

This is a very special year for Queens University RFC as they celebrate their 150th anniversary, while Cashel celebrate their 100th. Over the past eight seasons there have been some great battles between the two clubs, in the All Ireland League, with narrow victories, late victories and some excellent rugby.

Saturday last at Dub Lane, Belfast was no exception but when it came to lateness Cashel could not have left it any later to snatch a victory with a penalty try four minutes into injury time in a game which was dominated for the most part by the home team. It was really a smash and grab result but full credit must be given to the Cashel players for sticking to their task when the game looked over and lesser teams would have settled for a losing bonus point.

Conditions were good and prior to the game Queens were on top of the league with Cashel in joint third position. It was crucial for Cashel to keep the ball away from the Queens backs, who had a reputation for running at every opportunity. Queens dominated the first five minutes with phases galore and fast running rugby. Cashel’s defence stood solid and they swept into the Queens half, kicking a penalty to the home 22 from where they set up a maul. They took the ball to the five metre line where Queens were penalised again. Cashel opted for a scrum which was reset three times, with Cashel using their dominance in this area to force the penalties. The referee eventually lost patience and awarded Cashel a penalty try-a dream start.

From then to the half time whistle it was all Queens. Just after the Cashel try they were almost in for a try but knocked on close to the line. They continued to camp in the Cashel half and a sweeping run was stopped by an excellent Richard Kingston tackle.

Queens’ speed in the backs was causing all sorts of trouble and also their ability to offload in the tackle. They narrowed the gap with a penalty on nineteen minutes. Richard Moran won a penalty for Cashel at the breakdown on 25 minutes when Queens were on the attack again. Four minutes later Queens were over the line but were held up. Following a number of scrums Cashel cleared their lines.

As half time approached a Cashel player received a yellow card for playing the ball on the ground, Queens kicked to the corner but Cashel won the ball in the lineout. However it broke awkwardly over the Cashel tryline, a Queens player dived and scored a try which was converted to leave the half time score Queens 10 Cashel 7.

It had been a very competitive half, dominated by Queens, but the defensive effort of the Cashel players deserved special mention. James Ryan led from the front with the tackle count along with Ed Leamy, Richard Moran and Fearghail O’Donoghue.

Queens started the second half as they finished the first. Two minutes in James Ryan won a ball at the breakdown to neutralise a dangerous situation. Cashel brought play to halfway ten minutes into the second half and were awarded a penalty. Luke Duffy hit the post with the kick, the ball bounced back into play, Queens infringed on the 22 and this time Duffy made no mistake the level the game at 10 points each.

Then Cashel began to move. James Ryan, Ed Leamy, twins Kieran and Brendan Ryan, Fearghaill O’Donoghue, Niall Fitzgerald, James Kendrick,  Richard Moran, Aidan McDonald and Alan McMahon began to find gaps in midfield. Ten minutes into the half Cashel were over the line but were held up. They continued to press but in a rare foray by Queens on sixty minutes their full back made a break and only an excellent tackle by Cashel’s Conor Cashman saved the day. Into the game for the first time this season following injury came club captain Cathal Ryan.The play at this stage was frantic but both defences were watertight until the 76th minute. Queens broke downfield with their speedy full back in full flight, a tackle was missed and he ran to the corner to score what looked like the winning try. The conversion was missed from a difficult angle.

Clonmel and Tullamore draw in AIL

As the game edged into injury time Cashel continued to play. They were awarded a penalty on halfway, which they kicked to the corner. Once again they set up a maul and drove over the Queens line. A defender collapsed the maul and to the delight of the Cashel team and supporters the referee did not hesitate and ran under the posts to give Cashel a penalty try-four minutes into injury time.

Queens were devastated and rightly so, as they had been the better team for long periods. But full credit must go to Cashel who never gave up, particularly in the final thirty minutes when they dominated possession and came back from the Queens try scored so late in the game.

Cashel play Rainey Old Boys at Spafield on this Saturday at 2.30.