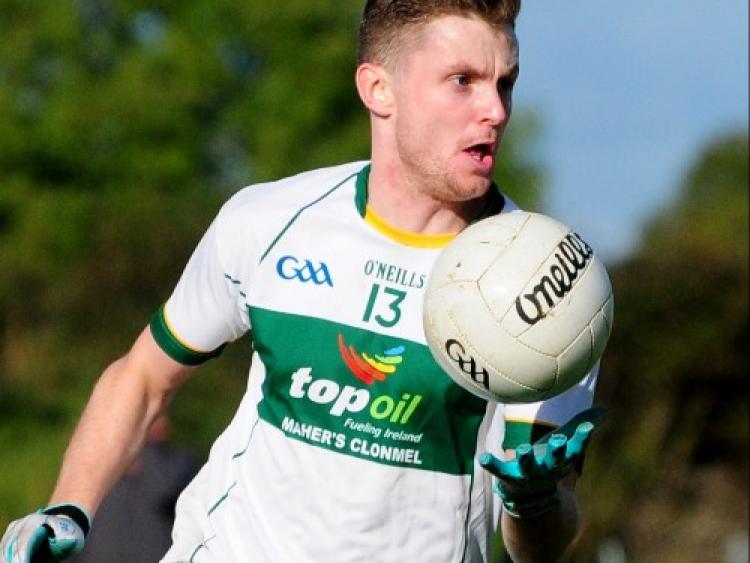 Clonmel Commercials' dream of winning a second AIB Munster Club Senior Football title in five years is still alive, after they dug out a thrilling victory over St. Joseph's in Hennessy Memorial Park in Miltown Malbay in Sunday's semi-final.
The Clonmel team were on the rack for long periods of a closely-fought contest but they found form when it mattered most, finishing strongly to reach another final, where they will meet Nemo Rangers on December 1.
Behind by three points at the midway stage, it looked for a spell as if Commercials would need snookers to clinch victory.
They slowly clawed their way back into contention and Jason Lonergan had the first score of a tense second half after 19 minutes, when he converted a close-range free.
Another Lonergan free lifted their spirits further, only for Conor Cleary to kick St. Joseph's first score of the second half four minutes from the end of normal time.
An ever-improving Clonmel team wasn't to be denied, however, as they shot four points without reply to seal the victory, while St. Joseph's had just that single point to show for their second half efforts.
Conal Kennedy kicked a great point after he broke down the right wing, and they were level for only the second time when his brother Jack Kennedy converted a free from some distance.
Timing their winning run to perfection, Commercials hit the front for the first time with a minute of normal time remaining when Seamus Kennedy struck a mighty point to give their supporters in the attendance of 1,715 further encouragement.
They surged two clear during the six-plus minutes of additional time when Jack Kennedy was on target, and the same player received his marching orders when he was given a second yellow card shortly afterwards, taking one for the team as he fouled an opponent who was breaking clear.
However, despite their numerical disadvantage, Commercials held on to silence a partisan home crowd. Seven minutes of additional time, one more than had been signalled, had elapsed when St. Joseph's were awarded a free, followed by a 45. But despite goalkeeper Sean O'Brien joining their attack, they never looked like breaching Commercials' watertight defence, which conceded just a single point in the second half.
When their backs were against the wall, Commercials showed tremendous character to draw the sting out of St. Joseph's - who were trying to reach the final for the second successive year - and then go on and secure the win.

Not too many teams would have dug themselves out of a hole and emerged from a sometimes hostile environment to secure the win, which booked the club's sixth appearance in the senior provincial final.
They had great performances over the hour from Jack Kennedy, Seamus Kennedy, Ross Peters, Michael Quinlivan, Danny Madigan and Liam Ryan.
Commercials had work to do at half-time, when they trailed by 0-6 to 0-3 having played well below par in the first half.
The game started without Commercials and they found themselves two points behind with just over a minute played, after Oisin Looney and Conor Cleary (from a free) kicked points, the latter coming after Michael O'Reilly's kickout had been intercepted.
Kevin Fahey opened Commercials' account in the sixth minute and they soon settled into their usual patient passing game. But they often ran into cul-de-sacs against a St. Joseph's team that was showing the greater hunger and desire in the opening half, with Cormac Murray, Eoin Cleary and Conor Cleary impressing.
A fine point by Michael Quinlivan, the chance created by Padraic Looram, had the sides level at 0-2 each after ten minutes.
But as St. Joseph's got on top all over the pitch they opened up a 0-5 to 0-2 lead and they were still three points ahead at the break, when they received a standing ovation from their supporters as they left the pitch.
The third quarter remained scoreless, as each team spurned chances to raise white flags.

But having prevented St. Joseph's from opening a four-points lead at any stage, Commercials were always well positioned for that final push that eventually saw them prevail.