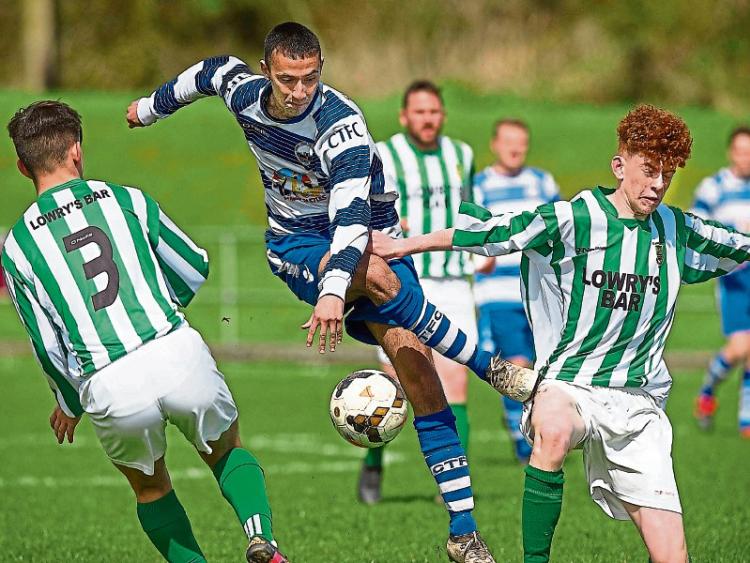 James Harding who scored four for Cashel Town in their 7-3 win over Cahir Park in Round 2 of the Munster Junior Cup at Palmershill on Sunday last.

This was a highly anticipated game between two Premier League teams, but in the end it turned into a stroll for the home side as the Villa progressed to the final internal round of this year’s Munster Junior Cup courtesy of a very comprehensive win on Sunday over rivals Bansha Celtic.

The hosts started brightly with some slick passing and went one up in the ninth minute when a deft ball over the top to Pippy Carroll allowed the striker to slot past the keeper with ease.

Two minutes later Villa went two up when Mick Ryan found Ronan McGuire who flashed home from inside the area. But the visitors were the next to get on the scoresheet in the 18th minute when Tony Egan scored after some excellent work in the middle of the pitch saw him played through.

And Celtic would have been happy to have been just a goal behind at the break such was the dominance of the Thurless side in the first 45 minutes. However,  Villa made sure that they got their reward for that good work when they added two more goals late on through Johnny Coleman and a second from Carroll to effectively end the tie before the oranges were sliced.

Things continued in the same vein in the second period with Mikey Wade making it 5-1 when he fired home from a free kick just before the hour mark, and Keith Cahill made it six 11 minutes from time with a fine strike.

Just before the final whistle Stevie Nolan made a fine run and an even better finish to the top corner to make it seven in the end and keep Villa rolling along in fine form this season.

Cashel’s fine season continued with a comprehensive win over Cahir Park in the Munster Junior Cup on Sunday, but this game might have been different if the visitors had not had a man sent off after just five minutes with a straight red card.

Having the numerical advantage almost from the start allowed the home side to take control and they took the lead after 20 minutes with Darragh Browne scoring after a clever one-two with James Harding.

Harding then got the first of his four on 26 minutes with a glancing header from a Mickey Coleman cross, and Eoin Byrne scored his first after five minutes before the break with a great run and finish from a really tight angle.

The turkey shoot continued after the break when Harding added his second and his side’s fourth only two minutes in, and he completed his hat-trick six minutes later with a close range finish.

Ten minutes later he completed his days’ work with his sides’ sixth goal coming from a close range finish after some excellent build up play.

The visitors pulled a goal back just after the hour mark through a Shane Murphy finish, from close range and then added a second minutes later from the penalty spot which was put away by Alan O’Donnell.

This re-awakened the home side and Byrne got his second fifteen minutes from time with a shot from ten yards. The visitors concluded the scoring two minutes from the end when a looping header from Shane Murphy eluded the home keeper, but they were never really anywhere close to troubling the home side who will be more than a worry from many sides when they draw is made for later rounds of this competition.

This much anticipated derby had to be switched from Green Lane to Carrigeen due to the inclement weather conditions over the weekend, but on the pitch the two teams delivered a very entertaining game.

The two sides went at each other from the start and ‘The Bridge’ eventually made the breakthrough in the 15th minute when they were awarded a penalty kick after Sean Maher was fouled in the area. The same player took the responsibility and fired the ball to the net from the resultant spot kick to the delight of his team’s supporters.

Wilderness worked hard to get back on terms and created plenty of chances, but Old Bridge keeper Liam Powell made a number of saves to keep his team in front at the break.

The second half continued in the same manner with Rovers having the majority of possession and chances but unable to break down a stubborn Old Bridge defence. Eventually their incessant attacking opened up space at the back for the hosts to attempt to exploit so it was almost a wonder that by the end the early penalty kick ended up being the only goal of the game and enough for old Bridge to advance on.

Clonmel Town produced an excellent second half performance against fellow Premier League side Glengoole United to progress in this year’s Munster Junior Cup on Sunday last.

The two sides were full of attacking verve in the early part of the game with the game flowing from end to end before Adrian Cleere opened the scoring after 15minutes for the visitors with a fine finish from inside the area. They then doubled the lead ten minutes later from the penalty spot when Conor O'Sullivan made no mistake from twelve yards, but Glengoole got themselves back into the game shortly after when Danny Rafter sprang the offside trap and slotted past the visiting keeper. Five minutes later a Stuart Hanrahan free kick found the net to level the game at the break.

The game was delicately poised at that point, but the second half truly belonged to the visitors who retook the lead in the 54th minute when Graham Guiry struck from the edge of the area, and they extended that lead to two goals just after the hour mark when Evan McGuire got on the scoresheet.

Forced to open up in pursuit of goals the home side began leaving gaps at the back and this was exploited by Ian Cleary who got a decisive fifth goal to send his side through to the next round of the competition.

An understrength Two Mile Borris side went down to First Division Tipperary Town in a Munster Cup tie that never really got going until the second half, but then produced plenty scores for the Newhill Park crowd.

The first period was largely forgetful with a lot of scrappy exchanges in the middle of the park belying both teams abilities, but the visitors finally managed a breakthrough five minutes into the second period when Tony Byrne latched onto a well-placed through ball to finish beyond the stranded Borris keeper.

Ten minutes later the same player managed to stretch the host’s defensive line again and finished for his and his side’s second goal as Town took control of the tie.

But Borris were not going to go away easily and pulled a goal back 20 minutes from time from a consistent source when Richard McCarthy again found the net with a well taken effort to reduce the deficit to the minimum.

That was about as good as it got for the home side however and Liam Malone re-established the visitors two goal lead shortly after to put them back in complete control.

The home side chased the game late on and in doing so left their backline exposed to Byrne in pursuit of his hat trick which he duly delivered minutes from the end to ensure that his side carry’s on in this year’s Munster Junior Cup.