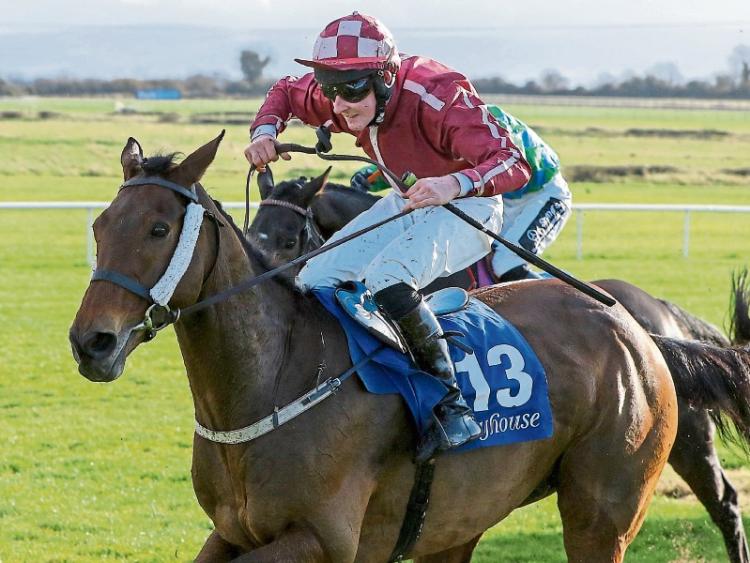 Witness Of Fashion and Trevor Ryan after jumping the last to win the Fairyhouse Handicap Chase at Fairyhouse. Photo: Alain Barr

Borris-Ileigh jockey Trevor Ryan rode the first double of his career at Fairyhouse.

The conditional rider landed the 2m7f handicap chase on the Pat Rooney-trained 13-year-old Witness Of Fashion and followed up on Willie Austin’s 10/1 shot The Chapel Field which carries the colours of his breeder William Burn.

It was a week to remember for Ryan as he was again in the saddle as the The Chapel Field followed up just two days later at Thurles where he won the 2m handicap hurdle. Punters certainly latched on to his chances this time and he was sent off the even money favourite.

Austin said - “William has been a great supporter of ours for many years and it means so much to us that we have helped him achieve his dream of breeding and owning a winner. The success at Thurles  was very special as it is our local racecourse and William’s wife Anne and their daughter Elizabeth were there too. They got a great reception from the crowd around the winners’ enclosure.

“Hopefully, Trevor’s double at Fairyhouse will be the first of many. He is so good to us at home, riding work and schooling, and it’s great to see him riding winners. It was his first winner at Thurles, and we couldn’t be happier for him and his family.”

Of course there was further celebration for Borris-Ileigh later in the week when the hurlers won the Munster club title in great style.

Ben Coen was again seen to great effect when winning the opening division of the apprentice handicap on the Pat Flynn-trained Whatharm at Dundalk.

The Fethard jockey had the 9/2 chance in front over a furlong from the finish and the partnership held off the late rally of the Tracey Collins-trained Plum Perfect by a short-head.

Killenaule youngster Gavin Ryan was in the saddle as Loaded won the second division of the apprentice handicap. Trained by Ado McGuinness, the well-backed 7/4 favourite got on top late on to beat Everyhouronthehour by three-parts of a length.

Denis Hogan looks to be carrying his good form right up to the end of the year and he was on the mark with the promising Sceptical in the 6f maiden. Ridden by Joe Doyle, the 10/11 favourite won as every odds-on shot should, travelling well into the straight and pulling clear inside the final furlong for a three and a half length success from the Henry De Bromhead-trained Abanica.

Rachael Blackmore had an easy time of it on the Henry De Bromhead-trained Sinoria which made an impressive start to her career over fences in the beginners’ chase at Thurles on Thursday. Sent off a 6/4 chance, the six-year-old was in a class of her own as she ran out a 12-length winner from the Willie Mullins-trained even money favourite, Good Thyne Tara.

The Gold & Blue Syndicate had their colours carried to success at Dundalk on Friday night where Count Of Carabass won the concluding 7f handicap. Bred and trained by Hilary McLoughlin, the eight-year-old got to the front under Chris Hayes at the furlong pole and stuck to his task gamely to beat Alfirak by half a length. Hayes has been in the saddle for each of the gelding’s six wins.

Edward O'Grady was a winner at Gowran Park on Saturday where the seven-year-old Allerdyce easily took the 2m handicap chase. Ridden by Phillip Enright, the 6/1 chance scored a six-length success over Conright Boy for the Class of ‘67 Racing Club.