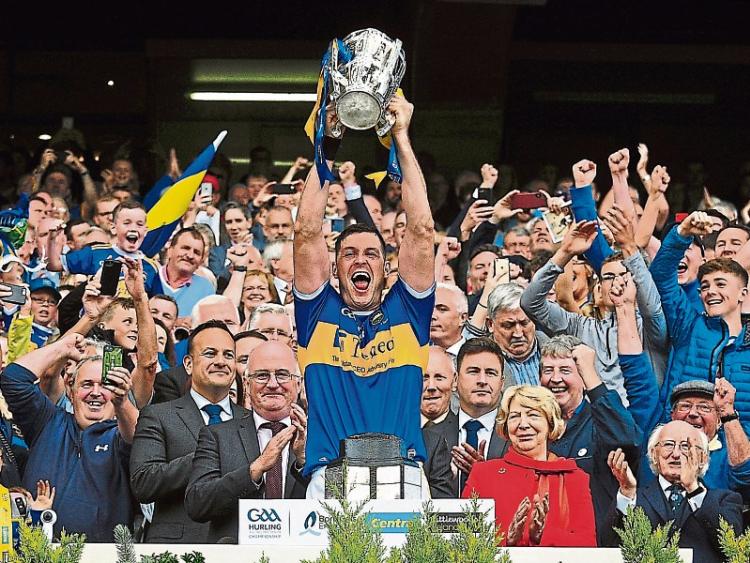 A New Year – and a new decade – dawns with Tipperary hurling in fine fettle. Club champions, Borris-Ileigh, prepare for next Sunday’s All Ireland semi-final clash with St. Thomas’s of Galway; the inter-county scene carries great expectations for the county in 2020. All is rosy in the blue and gold garden – for now at least.

All winter we’ve basked in the afterglow of 2019 so now, standing on the cusp of 2020, it’s perhaps appropriate to cast a more critical eye on our prospects for the year ahead. As the advertising copy reminds us ‘past performance is no guarantee of future returns’ so perhaps a more grounded assessment of our whereabouts is called for at this juncture.

As I write the team is away on holiday, travelling from New York to Cancun, Mexico, where I’m sure Liam Sheedy will have time to ponder the season ahead and the obstacles it’s likely to throw up.

An ‘Irish Examiner’ piece by Anthony Daly last week suggested a version of the roaring twenties lies in wait for hurling fans with nobody dominating and much colourful excitement expected. I was glad to see that Tipperary wasn’t being set up as the one to target, though Dalo’s suggestion that as many as nine counties have realistic hopes of winning seems excessive.

Ever since Liam Sheedy stepped aside after the 2010 win the prevailing theory has been that a great opportunity was missed back then. Given the age profile of the side at that time, and the boost of that win over Kilkenny, the feeling was that Sheedy’s continued involvement would have yielded more successes in subsequent seasons. It’s a theory that now, belatedly, will be tested in 2020.

Tipperary’s optimism ahead of the new season is based on a few factors. Sheedy’s continued involvement is obviously central to it all. His standing with the players is remarkable and there is a feeling that if anyone can manage the back-to-back it will be the Portroe man.

Then there’s the underage successes of recent years, which are seen as adding more fuel to the engine, though I think we need to be careful in this regard. Liam Cahill’s successes were extraordinary and in time they’ll be seen as even more remarkable if most of his protégés fail to make the higher grade.

It’s interesting, for comparative purposes, to look back at the minor crop of 2006/07. This was the golden generation that would eventually drive the senior successes of the 2010s. Seldom, in any county, has a group of minors produced so many future senior medalists: Paudie Maher, Brendan Maher, Mickey Cahill, Noel McGrath, ‘Bonner’ Maher, Seamie Callanan, Gearóid Ryan, James Barry and others.

What was remarkable about that group was how rapidly they transitioned from underage to senior. By 2009 several of the above names were involved in their first senior All Ireland; a year later they had the perfect collection of minor, U-21 and senior medals. Such a seamless transition to the rigours of senior inter-county was spectacular.

By comparison the Liam Cahill production line is making more modest progress. We now head into a fourth season since Cahill’s minor success of 2016, yet nobody from that team has yet nailed down a first-fifteen spot with the seniors. Jake Morris is closest and there’s optimism that the likes of Ger Browne, Jerome Cahill, Paddy Cadell and Mark Kehoe can step up to the mark also – but, four years on, it has still to happen.

Perhaps the point we should make is that the Paudie Maher generation was unique and we should not expect the same from other groups such as our recent U-21 and U-20 winners. Underage is merely a stepping stone and only the very best can negotiate a pathway to the top tier.

Last year Liam Sheedy relied heavily on the tried and trusted rather than fast-tracking some of the younger players. It was a policy that paid a rich dividend. With none of the main players retiring since August the manager now heads into the new season with his team intact and a crop of younger players snapping at their heels. It’s an ideal scenario.

Besides, the expected return of ‘Bonner’ Maher sometime in the spring adds significantly to the attacking options. The Lorrha man was having one of the best seasons of his career when the cruciate snapped against Limerick last summer. However, his dedication to the rehab programme is said to be exemplary and hopes are high that he’ll mirror Brendan Maher’s spectacular return last year from a similar position.

All of the above suggests that Tipperary is in good nick as we head towards the start of the league in late January. However, the unknowns that can pop up any year can scupper the best laid plans. Tipperary are listed as 3/1 favourites for the 2020 All Ireland but there will be many twists and turns on the road before the year’s fate will eventually be known.

It’s encouraging that there are no wild predictions circulating about an impending Tipperary dominance. We’ve suffered from such perceptions in the past. Instead there’s now a broad consensus that a number of teams have a realistic chance of taking the top prize. Anthony Daly’s article, referred to above, reflects that consensus.

The fact that Tipperary haven’t put titles back to back since the mid sixties probably puts a brake on speculation that it will happen in 2020. Others too, such as Limerick, Galway and Clare in recent times have failed to defend their title so all of that gets factored into every analysis.

There’s probably a recognition too that Tipperary got a rub of the green here and there on their way to glory last year.  I’ve no doubt drawing Laois in the quarter-final was a godsend after the deflation of the Munster final. Had we faced Galway, or even Dublin, in that quarter-final history might well have been different.

2019 was also a season that left several other counties with deep regrets. Wexford are still bemoaning what they saw as a lost opportunity in the semi-final and of course Limerick are in rueful mood too after being caught by Kilkenny.

From this early-January perspective I’d regard Limerick as one of the main threats in 2020. They’ve had their off-field winter woes with discipline issues but assuming they get these sorted and they recover the focus of 2018 then I expect they’ll pose major problems in 2020. The age profile of the team is certainly an advantage and by now they’ve had experience of both the ups and downs of championship hurling so they should be wiser and more wily in 2020.

Interestingly several teams go into the 2020 season with new managements. Cork have Kieran Kingston back on board so it will be interesting to see how his second coming works out. Having been in charge so recently will be an advantage in terms of player knowledge and for the manager it’s a case of unfinished business. Indeed for Cork generally there’s lots of unfinished business given their recent record.

Clare and Galway have had their internal struggles in trying to put management teams in place. Eventually Brian Lohan got the nod in Clare where there’s a lingering sense of unfulfilled potential since their 2013 All Ireland win.

Shane O’Neill eventually got the Galway gig as successor to Micheal Donohue. The past year, 2019, was their poorest year for a long time but as recent All Ireland winners they’ll feel there’s no shortage of potential.

Davy remains in charge in Wexford for what will probably be his final year unless they capture the top prize. A Leinster win last summer marked significant progress but it remains to be seen whether or not they have the wherewithal to go the next step.

We’ll take more than usual interest in Waterford this year with Liam Cahill in charge. They’re coming from a low ebb after two disappointing Munster campaigns but I’ve no doubt the Ballingarry man will give them a lift. Nobody gives a better pep-talk than Cahill and he’ll tick every box in terms of preparation. Whether or not he has the players to do the job remains to be seen.

Finally Kilkenny haven’t gone away you know. I was glad to hear D.J. Carey recently give a more balanced and reasonable view of the Richie Hogan dismissal. As always it would be foolish to discount them.

Through it all Tipperary chase that elusive title defence. It might be our best opportunity for some time to achieve it.