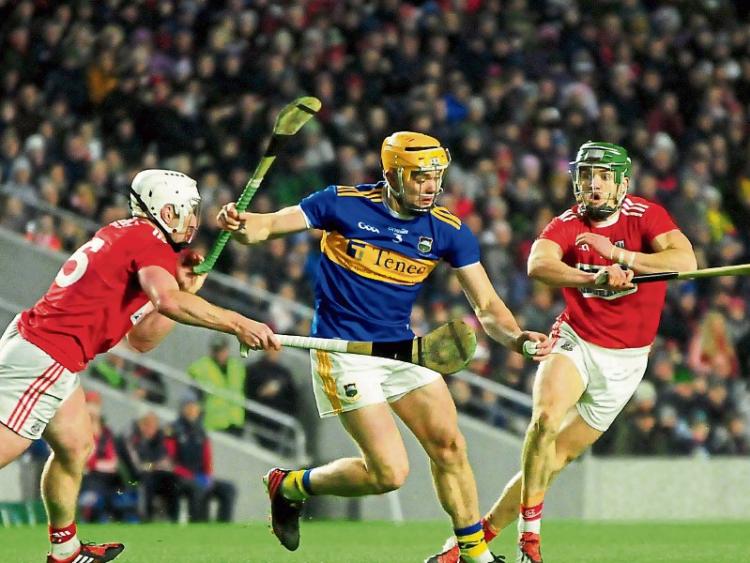 Ronan Maher in action against Cork

Tipperary’s poor start to the league continues. A loss by the Lee sees the team shoulder-to-shoulder with Westmeath at the base of the league table – not a position befitting the reigning All-Ireland champions.

This latest defeat may not have been as galling as the previous week’s to Limerick but, nonetheless, it’s another setback in a growing sequence of reversals.

Four competitive outings - two each in the Munster League and National League; since the All- Ireland win have all gone astray and there’ll be no easy pickings on our next engagement on Sunday week at Salthill.

I was unable to get to Pairc Ui Chaoimh on Saturday, so had to make do with the comfort of the couch and RTE’s offering instead. It’s no substitute for being there. The camera follows the ball so you don’t get a panoramic view of the pitch and player positions.

On the plus side there was the enjoyment of that little spat between Brendan Cummins and Donal Og Cusack in their preview of the game. The goalies clashed over Cummins’ suggestion that Cork were perceived as soft. Oddly enough Cusack’s critique of Cork was very similar, showing clips of players standing off opponents when a physical presence was needed.

But the ‘soft’ word seemed to hit a raw nerve. It was a very touchy reaction from Cusack, with him suggesting that there was an element of glee in counties like Tipperary and Kilkenny when discussing Cork’s difficulties.

Mind you Cummins would need to be smarter in his choice of words. We don’t want them being used in a Cork dressing room next May. You can well imagine the narrative:  ‘These Tipp lads think ye’re soft, so what are ye going to do about it’.

Anyway the first half of this game certainly had a soft touch to it. It was all very leisurely with nice touches but plenty of space and lax marking. The pitch seemed to be in fine fettle so the ball was moving smartly and Cork’s pace was showing. It was a game to their liking.

Cadogan was in nifty form and helped Cork to go five-up by the end of the first quarter. Tipp did retaliate admirably. Mark Kehoe caught the eye with some fine scores, John McGrath prominent too as was Paddy Cadell before being replaced by Jerome Cahill in what seemed a strange move. Michael Breen too was called ashore before the interval, his place going to Niall O’Meara.

Tipp got back on terms and were just a point adrift when the second Cork major came four minutes into injury time. It was similar to a goal conceded to Limerick a week earlier. This time Ronan Maher got turned over as he tried to walk the ball out of defence and Sean O’Brien was forced into the foul that gave Pat Horgan the penalty, which he dispatched with some venom.

Four down at the interval, Tipperary manned up well in the second half, with Cian Darcy hitting an immediate brace of points and Paudie Maher adding his third in a very noteworthy contribution. It was now a lively contest with more oomph in the exchanges, though one always sensed that Cork’s desire was slightly ahead of Tipperary’s.

Besides, as with Limerick last week, their subs had a far greater impact than Tipp’s. Darragh Fitzgibbon, I thought, did major damage to us in that second half, with Mark Coleman prominent too and Shane Kingston adding more threat late in the match.

By contrast Tipp’s replacements were less impactful, though Jerome Cahill did reasonably well. Bubbles had an unfortunate entry, though it’s a relief to hear that the news is good on that score, with the player sore and shaken but with no serious damage  done.

It all came down to a tight finish. Cork can be grateful for goalie Patrick Collins, who had a string of match-saving interventions, denying John McGrath (twice), Niall O’Meara (great reflex save) and Callanan, though the latter got no great power in the shot.

Eventually Tipperary got the goal when Kehoe was bundled over in the square and Brian Hogan gave goalie Collins no chance with a power-drive to the roof of the net. Back to a single point for the final minutes, Tipperary couldn’t muster an equaliser and Seamus Harnedy rounded it all off with the final flag.

On balance Cork just about deserved the spoils, as Tipp are left to mull over another narrow miss. We thought this pattern was banished with the Wexford match last summer, but old habits die slowly.

On the Tipperary side there were mixed assessments. Brian Hogan’s penalty was an obvious plus but has to be balanced against the failure to prevent the first Cork goal and some puck-out issues.

It was certainly a day when Cathal Barrett was badly missed in defence. He’d likely have been tasked with policing Cadogan, who gave Sean O’Brien a testing time. Paudie was again outstanding in defence – nothing new there. Ronan too was impressive at times, though being overturned in the lead-up to the second goal was a definite negative.

It was a shame Paddy Cadell was replaced on a day when he made a major impact for the opening twenty minutes or so. Alan Flynn put in a solid shift too.

In attack the main credits go to Mark Kehoe and John McGrath. Cian Darcy had some useful inputs also but Jake Morris fell well below his form in the Limerick game. Michael Breen’s almost ritual substitution at this stage is a major worry and there was huge disappointment too at Jason Forde’s anonymity for long spells of the game. Jerome Cahill did well on his introduction and Niall O’Meara also had a few useful plays.

Overall, though, it wasn’t enough and leaves Tipperary in a difficult place now ahead of round three against Galway. I don’t fully buy into this almost blasé attitude that it’s early days and the management is experimenting so there’s no need to worry.

Well, other teams are experimenting too and losing can become a habit as much as winning. Form can’t be switched on and off like a light switch so developing winning momentum can be crucial.

I’d expect a more earnest approach in terms of selection and performance for the Galway game.

In other matches Limerick made light of the Galway challenge at the Gaelic Grounds. Once Canning got injured in the second half the Tribesmen looked rudderless, though again they’ll improve with the return of some players.

The most significant outcome at the weekend, I thought, was the victory of 14-man Clare down in Wexford Park. This was the Lohan versus Davy grudge match and it ended one-nil to the new Banner boss. It’s never easy to take a win out of Wexford Park so this was a solid statement by Clare. Tony Kelly was exceptional.

Finally, and as a follow-up to a piece I did on the County Board finances a few weeks back, the AGM of the Supporters Club was held last Friday, where I was interested in the figures being presented.

As a result then in the past year the Supporters Club contributed €120,000 in support of Tipperary teams. Given the precarious state of the County Board’s finances this is invaluable backing.

There was an added dimension last year with a commercial board being set up in conjunction with the main sponsor, Teneo. This board contributed €185,000, as well as a €50,000 donation to the team holiday fund. Incidentally the commercial board money is channeled through the Supporters Club.

So between them the Supporters Club and the commercial board contributed €355,000 to the county finances last year. And yet the County Board ran a deficit for the year of around €370,000.

These are staggering figures. It was the first year of operation for the commercial board and in their absence the County Board’s deficit would have jumped to over half a million.

When you have a successful year like 2019 nobody bats an eyelid at deficits but eventually accounts have to be brought into the black, so that deficit figure should concern everybody. Clearly all management teams have to be presented with the reality of cutting costs and I don’t know if that conversation has happened yet.