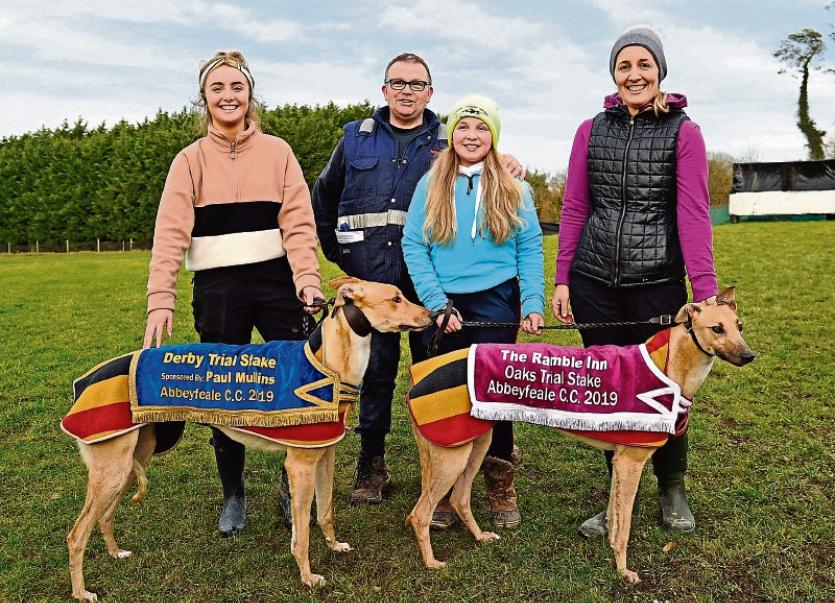 The McKenna family from New Inn - Owen and Sian McKenna and their daughters Freya and Aliyah - with Dicks Partner and Hope Alive, which will run in this weekend’s National Coursing Meeting in Clonmel

The largest Tipperary representation for many years will be lining up for the Horse and Jockey Hotel Oaks and the Boylesports Derby at the 95th annual National Coursing Meeting, which takes place in Clonmel this weekend.

The opening day of the meeting is Friday, Valentine’s Day, when owners and trainers and their supporters will be hoping to continue their love affair with the meeting long into the weekend.

The meeting continues on Saturday and the finals will take place on Sunday, with coursing starting at 11am on all three days.

The strong local contingent in the Oaks includes Ayle Girl, owned by the Well Ayled Syndicate led by John Ryan in Cappawhite. Ayle Girl is one of a number of runners at the meeting trained by Declan Byrne in Carrick-on-Suir. 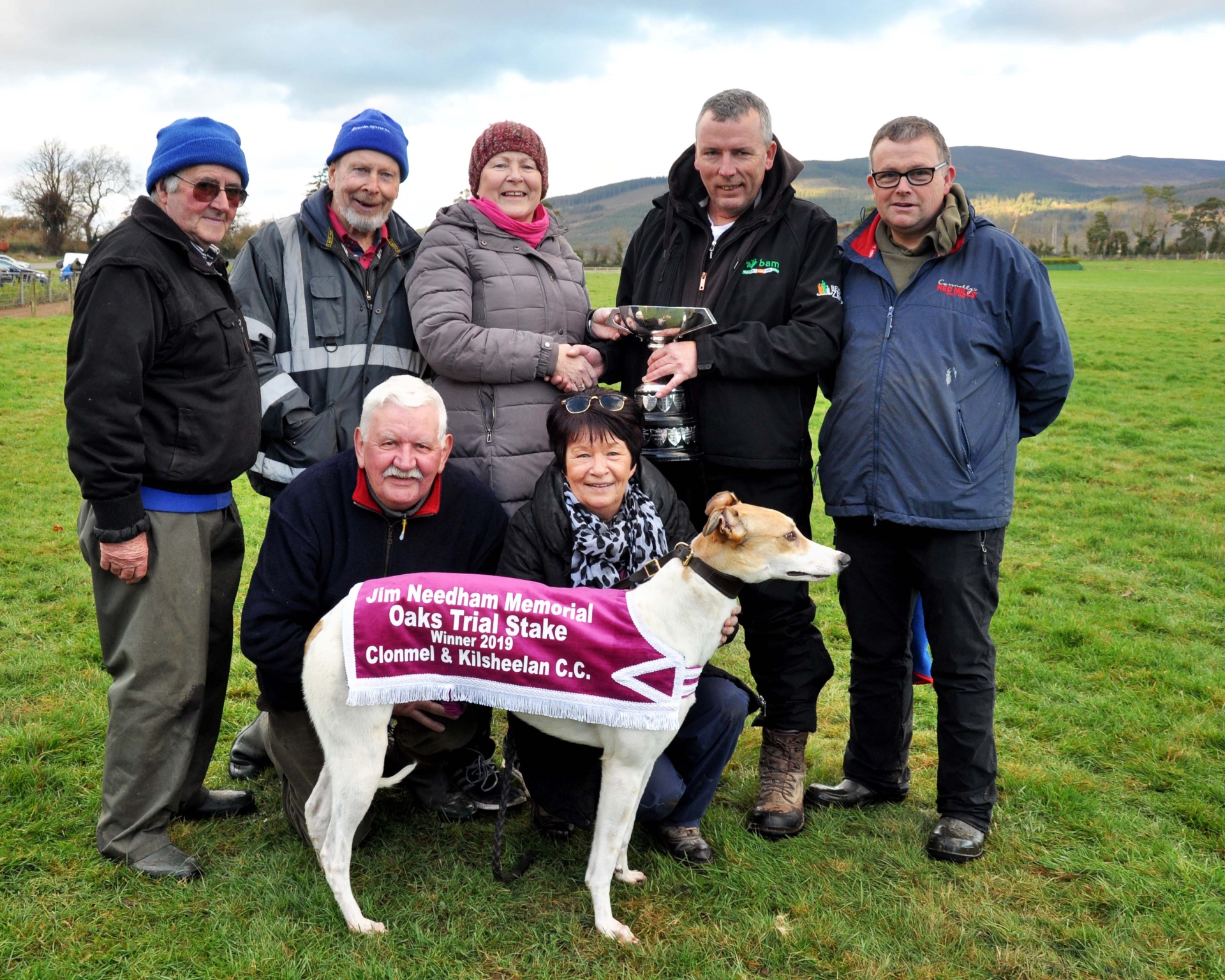 Ciaralou is owned by the Habbey Road syndicate in Clonmel, led by Lou Lonergan from Cherrymount and which also includes the Fogarty family in Abbey Road.

Trained by Owen McKenna in New Inn, Ciara lou qualified in Kilsheelan, appropriately enough, as Lou Lonergan is a prominent member of the Kilsheelan club.

Another Oaks hopeful trained by Owen McKenna is Hope Alive, jointly owned by Mary O’Connor in Kilsheelan and Una Creed.

Una lives at the edge of Powerstown Park and will have the shortest distance of any owner to travel to the meeting, while Mary has a busy few days in store, with the O’Connor family (Surehaul) sponsoring the feature race at Thursday’s horse racing meeting.

Marshals Babe is owned and trained by Ciara Roche in Coleman, Lisronagh; while John Mulcahy in Clerihan has a double interest in the Oaks with Please Abbie and Please Luci, which he owns and trains.

Quarrymount Hart is owned and trained by Ann and Jim Quinlan in Emly, while Some Exhibition is owned by the King and Queens Syndicate, led by Nicky Holland in Golden and which includes Johnny O’Dwyer in Clonmel.

Wilderness Honey, which qualified in Cashel, is owned and trained by Declan Drohan in Clonmel. 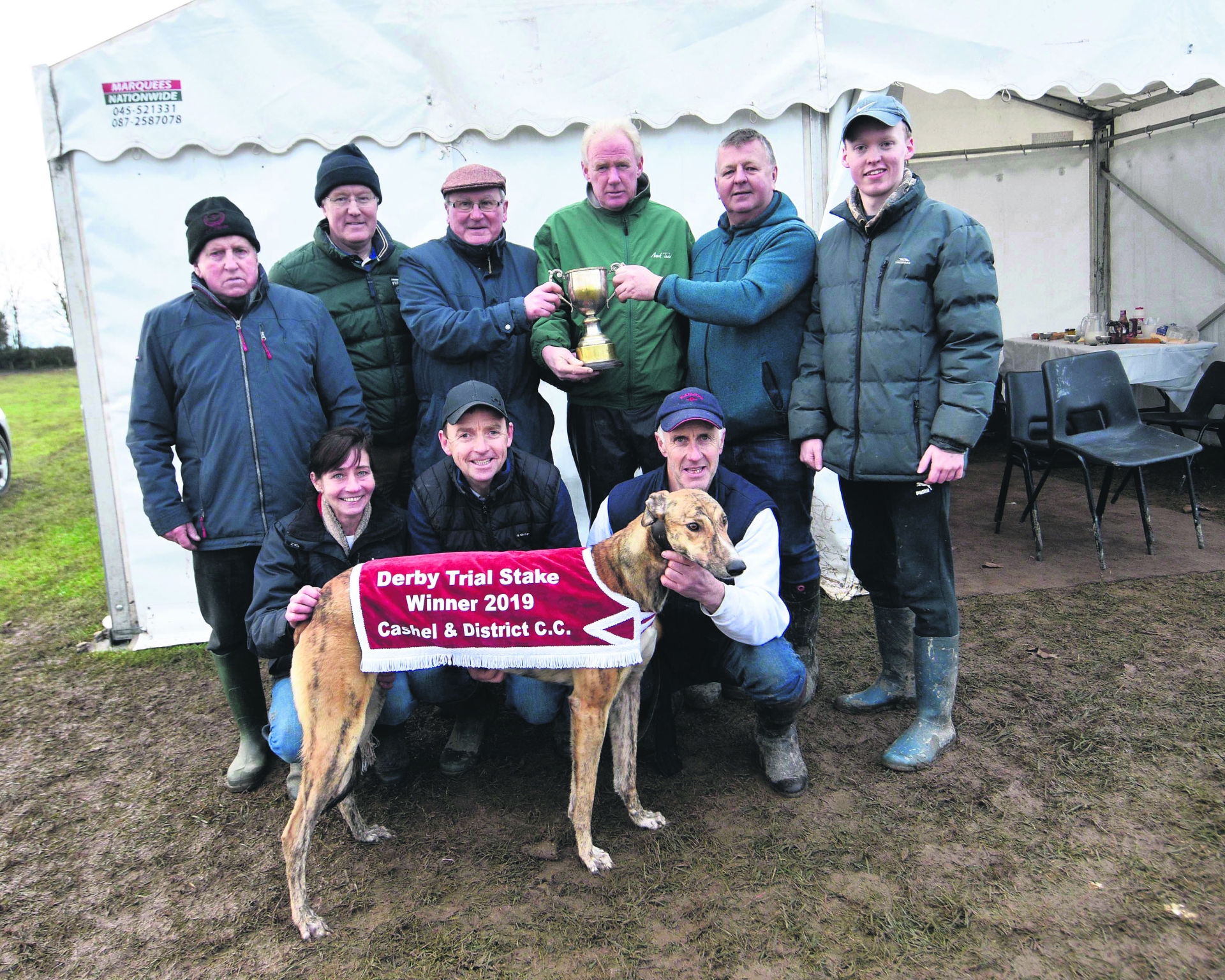 Meanwhile, in the Boylesports Derby, Mad Mans Game is one of a number of runners for Rosegreen-based trainer Kevin Barry, who won last year’s Derby with Rumour Has It.

Mad Mans Game, which qualified in Cashel, is owned by John Walsh, Michael Flannery and Nigel Quinn in Clonmel.

Crescent Whisper, which is owned by Martin Ryan from Moyne, qualified in Thurles and is trained by Margaret and David Flanagan in Fethard.

Dicks Partner is owned by by the Tobin family from Clonmel, including Paddy, Liam, John and John’s son Pat.

The family was successful two years ago with Dicks Bimbo, which won the Champion Bitch Stakes, and they will be hoping for more glory this year with the Owen McKenna-trained dog, which won in Abbeyfeale just after Christmas.

Owen McKenna also trains Highbury, which is owned by Tommy Fogarty, who’s originally from Abbey Road in Clonmel and is now based in New York.

Gus and Bus is trained by Thomas O’Donovan in Grantstown, Tipperary town, for the Lads Down Under Syndicate.

The owners include Australians with whom Thomas is friendly since his time in Australia, and some of the syndicate will make the long trip to the northern hemisphere for the meeting.

Raise The Alarm is owned by the Part of a Dream Syndicate which includes the Cahill family, originally from Mullinahone and who have lived in Kent for many years.

Soul Man, trained by Declan Byrne in Carrick-on-Suir, is owned by the Seven Drops Syndicate, whose members come from Clonmel, Kilsheelan and Carrick-on-Suir.

The national meeting in Clonmel is taking place a fortnight later than usual, after the start of the hare coursing season was delayed by the outbreak of the rabbit and hare disease Rabbit Haemorrhagic Disease (RHD2) last year.

The meeting was in jeopardy for some time and DJ Histon, CEO and Secretary of the Irish Coursing Club, is grateful to everyone who played their part to ensure that the meeting will go ahead.

For the first time horse racing will take place at Powerstown Park before the coursing, with many weekend visitors planning to arrive in town for the race meeting.

The four days of activity will pose a challenge for the ground staff but the organisers are confident that they will rise to the challenge, as always, to have the course in perfect condition for horse racing and coursing.

The horse racing meeting scheduled for Clonmel today, Thursday, has been called off.