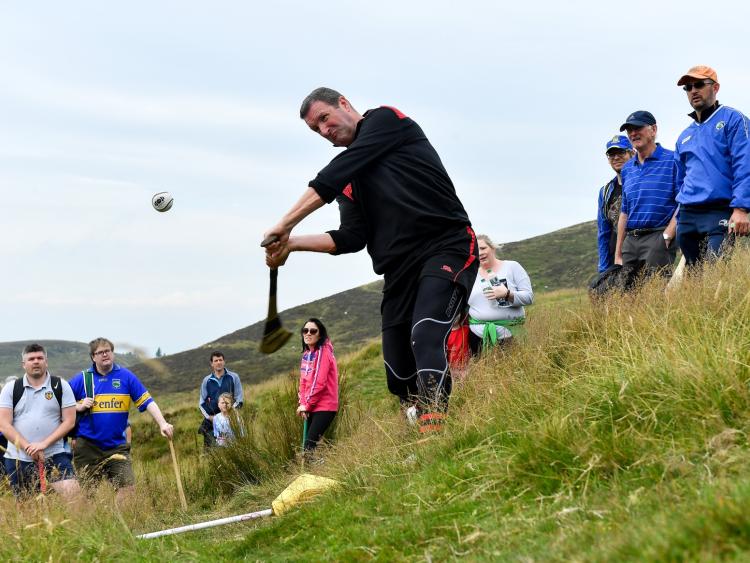 Standing My Ground is the title of Brendan Cummins' autobiography

With all sports effectively shut down during the coronavirus crisis, below is a list of books, films and documentaries that may interest sports fans during the long hours of social isolation and social distancing -

What: The former No.1 tennis player's autobiography.

What: Fascinating account of the dramatic events at Croke Park on Bloody Sunday, November 21 1920,  following the IRA assassination of British military agents in Dublin, resulting in the shooting dead of fourteen people by the Royal Irish Constabulary. Includes the social/political scene of the time and describes events from the perspective of the Irish and British participants.

Name: Lar Corbett - All In My Head

What: For Tipperary hurling, defeat in the 2012 All-Ireland semi-final was heartbreaking. For Lar Corbett, it was devastating. Then again it has never been a straight road for the three-time All-Star and 2010 Player of the Year.
Deemed not good enough to play for Tipperary at minor level, he was 19 before his unique talent was identified by Nicky English, who gave Lar his chance in the All-Ireland winning squad of 2001. But this success was to be followed by years of despair as Tipperary hurling floundered, managers came and went and a recurring hamstring condition left his career hanging in the balance.
The turning point came in 2007 with the arrival of the managerial dream team of Liam Sheedy, Eamon O’Shea and Michael Ryan.

Name: Paddy on the Hardwood

What: A book about an American basketball coach who takes charge of the Tralee Tigers, featuring a very young Kieran Donaghy.

Name: Football Against The Enemy

What: Throughout the world, football is a potent force in the lives of billions of people. Focusing national, political and cultural identities, football is the medium through which the world's hopes and fears, passions and hatreds are expressed.

Simon Kuper travelled to 22 countries from South Africa to Italy, from Russia to the USA, to examine the way football has shaped them. At the same time he tried to find out what lies behind each nation's distinctive style of play, from the carefree self-expression of the Brazilians to the anxious calculation of the Italians. During his journeys he met an extraordinary range of players, politicians and - of course - the fans themselves, all of whom revealed in their different ways the unique place football has in the life of the planet.

What: Brendan Cummins' record of having made the most senior hurling championship appearances than any other player in the history of the game was only overtaken by Waterford's Michael 'Brick' Walsh two years ago.
Following his league debut for Tipperary in November 1993, Cummins went on to play at the top of the intercounty game for 19 consecutive seasons. He won two senior All Ireland medals, five Munster championships, four League titles and five All Star awards.
From fearless shot-stopping to the pinpoint accuracy of his puck-outs, Cummins was unrivalled in the consistency of his performances, a consistency underpinned by a sometimes punishing physical commitment, mental discipline and great attention to detail. He was the rock upon which Tipperary built their team under many managers and changes of personnel.

What: Lions legend Bobby Windsor has enjoyed triumphs beyond the dreams of most international players but has also suffered personal tragedy. His rugby career as the best hooker in the British Isles during the second golden era of Welsh rugby in the 1970s is a turbulent tale of blood and thunder on the pitch.

What: Jonny Wilkinson's career has crossed three decades and four World Cups. He has accumulated phenomenal achievements, world points records, an impressive list of broken body parts and a drop goal that will be remembered for ever.

What: The book has John Doyle’s widow Anne as a central character. It records the life of the hurler, the husband, the father, the hard worker who toiled long hours in order to provide for his seven children. It charts his difficult start in life – he lost his mother very soon after birth and was raised for a time in Dungarvan before returning to his native Holycross, where he lived out the remainder of his days.

What: Jimmy was born in Thurles, birthplace of the GAA, on March 20, 1939. He grew up just around the corner from the famed Semple Stadium, and lived in the town his whole life.
His father and uncle had won All-Irelands with Tipperary, and Jimmy’s aptitude for the small-ball game was evident from an early age at Thurles CBS. Having honed his skills in the shadow of Semple Stadium, he was chosen on the Tipperary minor team aged just 14, and would later debut for the seniors at 18, one of the youngest ever (he also won a first county title with Sarsfields as a 16 year-old).

Jimmy was part of the legendary Tipp side of the 1960s; possibly the most dominant team-ever until the recent all-conquering Kilkenny group.  Tipp and Jimmy won the Liam MacCarthy Cup four years out of five, with just a freak defeat to Waterford in 1963 preventing a likely five-in-a-row.

Jimmy was heavily involved with the writing of this book and saw it to completion, but sadly his unexpected death came just as it was about to be published. Jimmy Doyle Boy Wonder of Hurling is a fitting tribute to one of hurling’s greatest exponents.

What: The definitive biography of one of the greatest, most extraordinary runners and Olympic heroes of all time.

What: Mickey Byrne is one of the great characters of Tipperary hurling. The winner of five All Ireland, seven National League and a record 14 Tipperary Senior County Championship medals, ‘The Rattler’s’ life story is as colourful as his hurling was.

His league and championship  career with the Tipperary senior team spanned fifteen years from 1945 to 1960 and he was a mainstay of the team that won three All-Ireland in-a-row from 1949-51.

He retired from inter-county hurling following the conclusion of the 1959-60 league, having made 34 championship appearances.

In a club career that spanned more than 20 years, he won an incredible 14 county senior championship medals. Byrne retired from club hurling at the age of 42 following the defeat of Carrick Davins in the 1965 county final.

Name: The Football Men: Up Close with the Giants of the Modern Game

What: The great footballers and coaches are rarely glimpsed from up close. They shield themselves from the tabloids, hide their personalities behind professionalism, and in the words of the cliche, do their talking on the pitch.

This book gets up close to them. The Football Men is not a series of celebrity profiles, and it doesn't attempt to unearth secrets in the players' private lives. Rather, it portrays these men as three-dimensional human beings. It describes their upbringings, the football cultures they grew up in, the way they play, and the baggage that they bring to their relationships at work.

This multimillion-pound, multinational world is mostly inhabited by ordinary men. The profiles in this book are sometimes funny, but never breathless or sensational. Some of the profiles in this book are based on interviews; others are the results of time the author spent with that person; sometimes the profile is a story of a country. All are fascinating and shed light on their subject to reveal things you wouldn't expect.

What: A young man of Wallisian origin in New Caledonia defies his father to go and play rugby in France. Living on his own on the other side of the world, he learns there is a price to pay to find success.

Name: When We Were Kings

What: Powerful documentary film by Leon Gast about the famous "Rumble in the Jungle" heavyweight championship fight between Muhammad Ali and George Foreman. The fight was held in Zaire (now the Democratic Republic of the Congo) on October 30, 1974.

Name: No Hunger In Paradise

What: Captivating yet alarming documentary about the unforgiving nature of English football's academy systems.

What: The inspiring true story of an accomplished open water swimmer's attempt to become the first woman to swim 30 miles through a stretch of cold, rough and shark-inhabited waters off the San Francisco coast.

Name: The Barkley Marathons: The Race That Eats Its Young

What: In its first 25 years only 10 people have finished The Barkley Marathons. Based on a historic prison escape, this cult like race tempts people from around the world to test their limits.