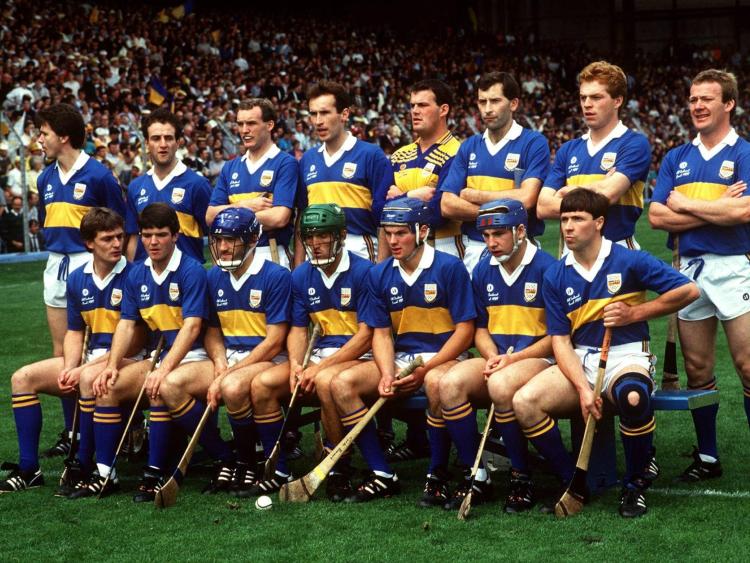 Thirty years ago this month, the Tipperary senior hurlers were out of the National Hurling League but were enjoying the trip of a lifetime as they headed for Canada and the Skydome in Toronto where they took on the All-Stars in an exhibition game.
Babs Keating's men had bridged an eighteen year gap to claim the 1989 All-Ireland championship and the Liam MacCarthy Cup at the hands of Antrim, having been knocking on the door since ending the Munster famine in 1987.

But, Tipperary were unable to retain the silverware and have not done so since either, despite winning five further titles in 1991, 2001, 2010, 2016 and the latest in 2019. Tipp did not retain the title either after 1971 when the tigerish Roscrea defender Tadhg O'Connor lifted the silverware, so we have to go back to 1964/65 when the Liam MacCarthy Cup last resided in The Premier County for more than a season. 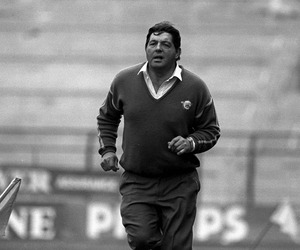 While defeat in the 1972 championship at the hands of Cork after a replay – they had drawn the first game by 3-8 apiece – didn't exactly sound alarm bells in Tipperary, it would be a remarkable sixteen years before 'Babs Babes' would win the provincial crown again. But, when they did, in that remarkable and unforgettable extra time replay in Killarney against Cork, it was to kick start a period of dominance which yielded provincial and All-Ireland titles aplenty – though not as many as most would have expected. Ever since, there has been criticism of the team and management for not winning more, but the reality was that there were many mitigating circumstances, including the fact that there was no back door if you were defeated at any stage of the campaign.

'71 captain Tadhg O'Connor claimed that Tipp would certainly have won more All-Ireland's during his time in the blue and gold jersey had the backdoor system been in place – he had experienced narrow defeats by teams which subsequently went on to win the silverware. And, it was his contention that Tipperary would have improved with games and would have won much more. It's a viewpoint which many of the Babs era players could also claim. 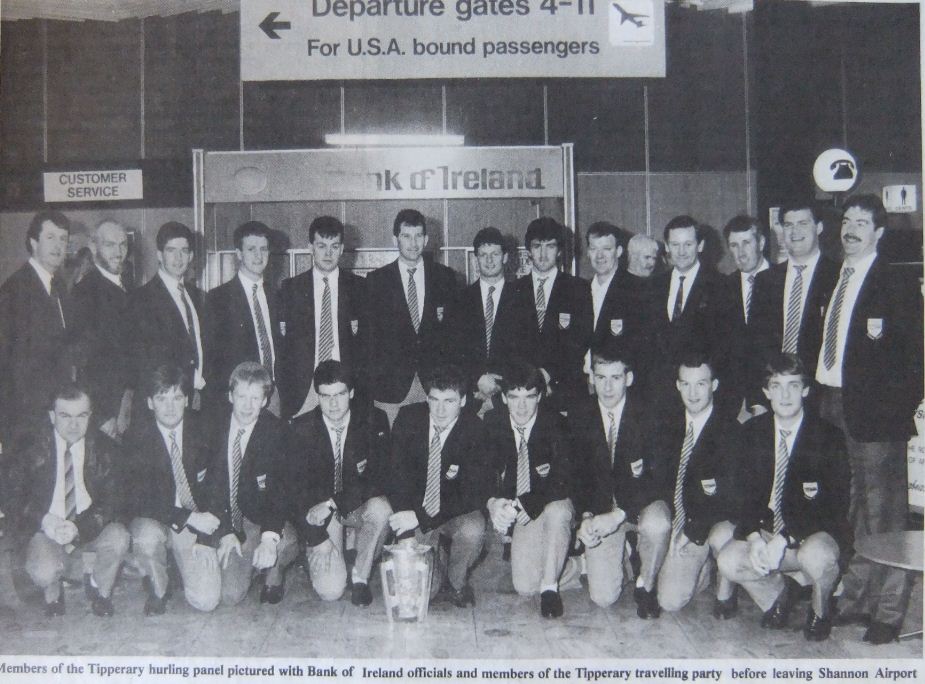 The touring group prior to departure for Toronto

Having won the '89 final against Antrim, Tipperary celebrated wildly and rightly so – a whole generation of supporters had never witnessed this kind of hurling euphoria before. The players were heroes and the management team – a much smaller and tighter unit than is evident nowadays – were likewise. They had also won a third Munster title in a row and when the 1990 season rolled around, there was the chance to make it four – a real milestone surely.

The league campaign had not gone well for Tipp – Autumn/winter defeats at the hands of Wexford and Limerick, were followed by a draw against Kilkenny in Nowlan Park. But, they somehow managed to avoid relegation as Galway had been beaten by Wexford and they instead were relegated alongside Antrim. For the All-Ireland championship to have been relegated would have been a serious knockback and even allowing for the level of experimentation and the injuries to key players at different stages, Tipperary were looking decidedly ropey as the 1990 championship campaign approached.

But, they eased their worries somewhat as they boarded the plane at Shannon Airport for that memorable trip to Toronto to take on the Bank of Ireland All-Stars in the Skydome which was regarded as the most advanced and sophisticated stadium in the world at the time. The magnificent venue with its artificial surface was home to the Blue Jays and 30,000 spectators turned up to see Tipperary winning by 5-15 to 3-11 in a first ever exhibition game of hurling in Canada.

The game was also broadcast live on TV and Premier County hurling enthusiasts were amused to see so many of their men wearing knee supports – normally Pat Fox was the man with the knee bandage but it looked as though the epidemic had spread like wildfire to the rest of the players too. The bandages though were preventative and designed to avoid the players getting 'burned' off the surface – a phenomenon many were to discover in subsequent years, as the same types of surface began to arrive on Irish soil. 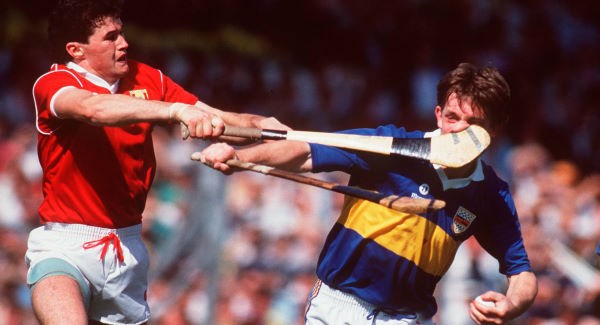 Naturally, there was a degree of overlap between the personnel on the All-Ireland winning team and the All-Stars team. In this instance, the All-Ireland champs were given first refusal. To make up the difference, the All-Stars team allowed Cork lads Jim Cashman, Tony O'Sullivan and John Fitzgibbon (all three would win All-Stars in 1990), Dublin full forward Brian McMahon (would also win an All-Star in 1990), and Kilkenny wing back Liam Walsh to make the trip to Toronto.

The All-Stars team boasted quite a few Galway players and the trip afforded them the chance to mix and mingle with the Tipp lads for a first time. The rivalry between the two best teams of the era had reached its zenith in the previous year's poisonous All-Ireland semi-final. Indeed, they had met so often between league and championship that familiarity had indeed breeded contempt. Tipperary's first victory over the Cyril Farrell trained side had been that '89 semi-final and it's a game which often over shadows, in recollect, the magnificent '87 semi-final which was one of the best games played between the sides. The league final of '89 was also a brilliant game played in Croke, whereas the '88 All-Ireland Final had been a poor game, ruined by a swirling breeze

The Galway players selected to travel to Toronto included Joe Cooney, Eanna Ryan, Sean Treacy and Michael Coleman – interestingly, the pair of dismissed All-Ireland semi-finalists Sylvie Linnane and Michael 'Hopper' McGrath were not picked to travel. The infamous Keady affair was still lurking in the background – the brilliant Galway centre back had been banned from hurling for having allegedly played illegally in the USA and was suspended for that semi-final of '89, perhaps adding to the sense of ire in the Galway camp. Tipperary were blamed in some quarter for having 'blown the whistle' on the late Keady – in fact, at a meeting of the Central Council, Tipperary delegate, the late Tomas Ó Baróid had proposed that Tony Keady be allowed to play, but he did not get the votes to back his proposal.

Tipperary received a bit of a bounce from that win in Toronto and when they returned to base it was business as usual as they readied themselves for the championship. They defeated Limerick in the Gaelic Grounds on June 10 having managed only two points from play in the first half – they trailed by 0-11 to 0-8 at the turnaround. But, with Limerick down a man following the dismissal of Mike Barron, Tipp finally got to grips with them and a last quarter flourish with the introduction of John Madden, Dinny Ryan and Conor Stakelum helping them to a 2-20 to 1-17 victory in a match which is notable for being the sole game the legendary Joe Hayes captained his county, in the absence of the injured John Kennedy. 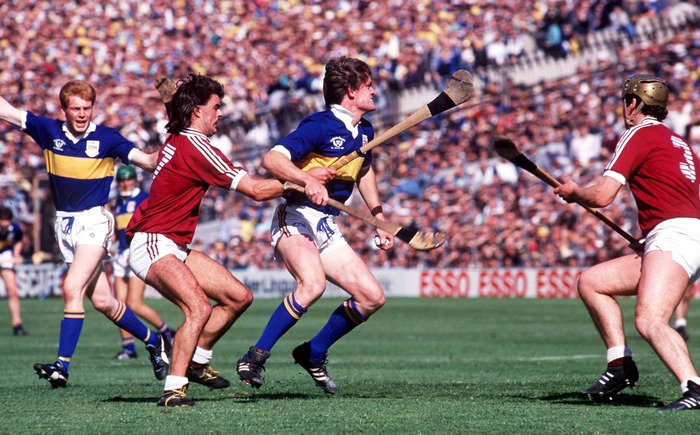 There was to be no comeback in the Munster Final against Cork and though short a number of key players, Tipp fell to a shock defeat by 4-16 to 2-14 in a final remembered for the 'donkey's don't win derbey's' comment from Babs Keating which was twisted by the Rebel camp to rouse their men and get their dander up. Tipp were out, the provincial and All-Ireland crowns were surrendered, and Cork went on to win the Liam MacCarthy Cup and the Sam Maguire in the same season.

Tipperary hurling people still reference the 1990 championship as being one of the ones which got away.