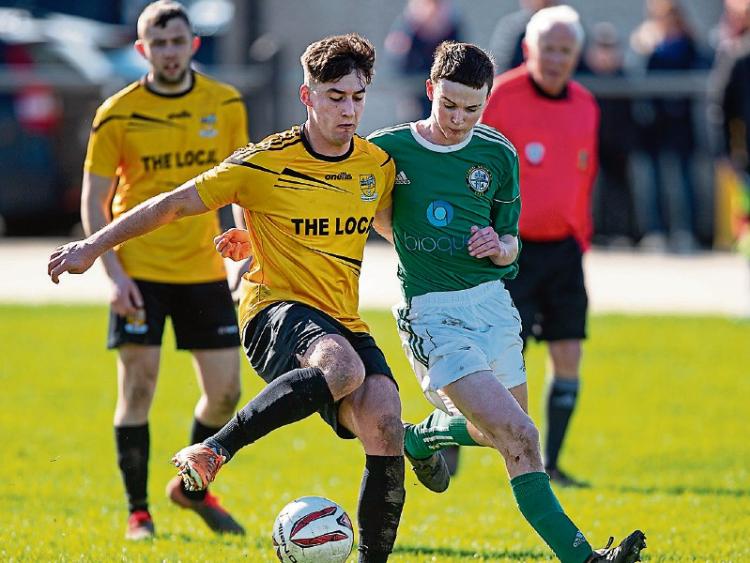 Clonmel Town’s Ryan Lambe comes under pressure from Clonmel Celtic’s Rory O'Dowd earlier this season. Both teams will be in action when the TSDL soccer season resumes this weekend

It has been almost four months since a football was kicked in anger in the Tipperary Southern and District soccer League (TSDL), but things finally get back to some kind of normality this weekend when the 2019/20 season resumes.

There are some very tasty ties to whet the appetite of a public that has been starved of live sport for months now.

And what  better way to resume in the Premier League than a meeting of the two most successful sides in the league’s history, current champions St. Michael’s and Clonmel Town, at the Dr. Pat O’Callaghan complex in Clonmel.

The Tipperary town side have had the upper hand in recent years, but this game is never easy for either side and both teams will be raring to go after the break.

There will be another make-or-break game in Clogheen on Saturday evening when Vee Rovers take on Peake Villa, with both sides needing three points for different reasons.

The Thurles side will be travelling as league leaders but know that they cannot afford to drop any points if they are to have any chance of usurping St. Michael’s from their throne.

At the other end of the table Rovers know that any more dropped points could see them relegated to the First Division after only a two-year spell in the top flight.

With that in mind, they will have one eye on what is happening only a short distance in the road at Cahir Park, where the home side take on an already relegated Clonmel Celtic side who have had a horrendous season by their own lofty standards.

The home side had finally found a run of form after a poor start themselves just before the break, so they will be hoping the resumption will see them continue that form and that they can save their Premier League status once again.

The final Premier League game of the weekend is a mid-table clash between Glengoole United and Two-Mile-Borris. Although both sides are now safe in the middle of the table, this is a derby game that neither will want to lose, as well as serving as good preparation for next season, the start of which won’t be far away after the end of the current season.