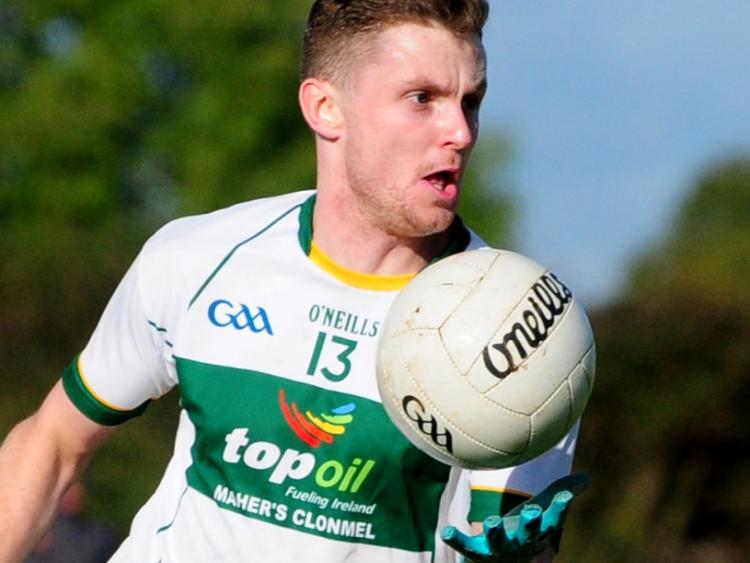 County champions Clonmel Commercials made a flying start to their defence of the FBD Insurance County Senior Football Championship when they had eight points to spare over Cahir at a warm and sunlit Ardfinnan on Saturday evening.

The scoreline, however, shows scant regard for Cahir's brave effort. The holders always found it hard to shake off their dogged opponents, and lesser teams would have caved in much sooner than this spirited Cahir outfit.

Commercials, however, were capable of displaying a ruthless streak when necessary and their quality all over the pitch shone through in what was an entertaining spectacle from start to finish.

The Clonmel team's greater ability to find the net always served them well. Cahir were six points behind entering the closing stages when a devastating Commercials move that filleted the Cahir rearguard saw Ryan Lambe lay the ball off to Michael Quinlivan, who supplied the pass from which Seamus Kennedy finished low to the net for their fourth goal.

Cahir picked themselves off the canvas yet again after that hammer blow, scoring the next three points from Mikey O'Connor's free, Ian Flannery and Kieran O'Dwyer. However Commercials reasserted their authority with the final two scores from Seamus Kennedy and Jason Lonergan's free.

Both teams finished with 14 players when Commercials' Sean O'Connor was followed to the sin bin by Cahir's Kieran O'Dwyer in what was always a full-blooded affair between teams hungry for action after the long lay-off.

Commercials led by nine points at the break (3-7 to 1-4) but were asked some serious questions by Cahir after the resumption. The second half was only two minutes old when Cahir's Mikey O'Connor planted a penalty high in the net after Liam Casey had been fouled.

Michael Quinlivan responded with a stylish point struck from some distance. However Cahir were in the ascendancy at this stage and Commercials goalie Michael O'Reilly had to be alert when making a double save from Conor Cashman and Stephen Grogan, as Cahir went in search of goals.

Ian Flannery had a point on the same attack but Commercials were always capable of maintaining some reasonable distance, social or otherwise, between themselves and Cahir; it never got too close for comfort for the Clonmel side, although they were seven points ahead midway through the second period when it appeared as if referee Derek O'Mahoney had signalled for another Cahir penalty, only to throw the ball in after consulting with an umpire.

Cahir enjoyed as much possession as their illustrious opponents in the early exchanges, yet they must have been wondering how they found themselves behind by 2-1 to 0-1 after eight minutes. After Kevin Fahey and Mikey O'Connor had traded early points, Michael Quinlivan buried a fifth minute penalty, awarded when Sean O'Connor was fouled as he kicked the ball.

Quinlivan was involved again three minutes later when he supplied the assist for Ryan Lambe's goal. Despite Cahir's honest endeavour throughout, Commercials now had an advantage that they never surrendered.

Cahir didn't help their cause by kicking three wides early on. But they had some reward when Mikey O'Connor pointed before Niall McKenna played a neat one-two Stephen Grogan before kicking a cracking goal.

That left just two between them after 11 minutes, but before the water break Commercials extended their lead with points from Jason Lonergan's free and Ryan Lambe.

Further scores for the Clonmel team followed from Kevin Fahey and Ross Peters, when Quinlivan picked him out with a peach of a pass; and Jason Lonergan's free. Worse was to follow for Cahir when Ger Quinn only succeeded in helping Sean O'Connor's effort on its way to the net.

Commercials made it 1-6 without reply when Sean O'Connor converted a free, and that nine-points scoring burst before the interval proved decisive, with Cahir never really recovering.

In a performance that showed that their title won't be relinquished too easily this year, Commercials owed much to the contributions of the experienced Michael Quinlivan, Jason Lonergan, Danny Madigan, Seamus Kennedy, Conal Kennedy and Kevin Fahey, while they also welcomed back Ian Fahey, who appeared as a second half substitute.

Newcomer Jamie Ahearne also made a good impression, as did younger players such as Sean O'Connor and Ryan Lambe.

Cahir's Mikey O'Connor, Ian Flannery and Niall McKenna posed a constant threat in attack, while Eddie Kendrick and Liam Casey ran themselves to a standstill around the middle of the pitch. Sean O'Connor and Ger Quinn also did well.