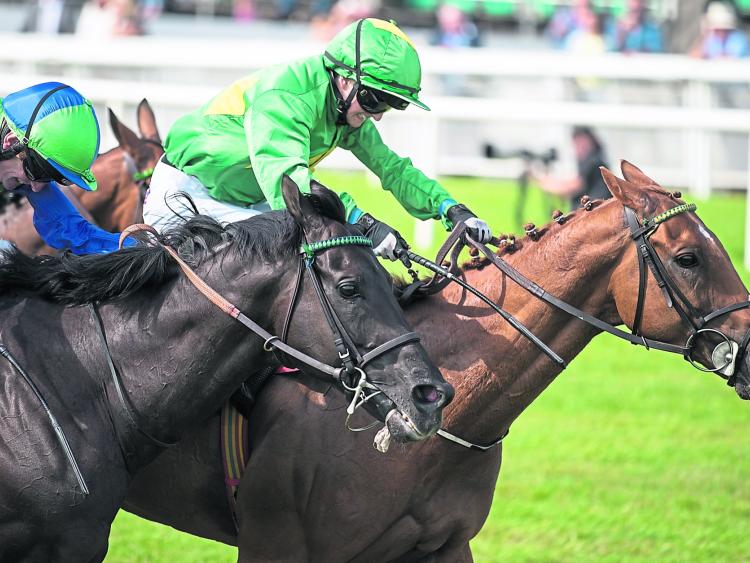 Check out the tips for today's racing at the Galway Festival

Alan's headline pick Great White Shark wasn't beaten too far yesterday in the big race of the day, and he is hoping for a little more luck with two selections in the feature handicap on Tuesday...

One thing we learned yesterday at Galway was never be afraid of backing a price. Seven horses hit the frame at 33/1+, even a 66/1 shot got some place money. Of course, you need a lot of luck, and I don't know if it's pocket talking, but I thought Great White Shark had none with a wide run in the amateur race. It wasn't to be with her, and Tony Mullins enjoyed his big day in the sun with Princess Zoe. Although Mullins winning at the meeting has a fairly familiar ring to it.

Tuesday provides one or two nice races, and I will be disappointed if Colin Keane doesn't come away with a winner.

Auxilia warrants a closer look for Lyons and Keane

The Listed fillies' race over 7f at 17:45 provides the stardust for the evening, but there's a lack of winning form and with such a large field, connections must feel there's a bit of Black Type there for the taking. The betting reflected that relatively late on Monday night with the Exchange going 4.00 the field.

It should be run at a good pace as Crotchet has established Group form this season and likes to make the running. This represents a drop-in class this term for the filly, who has been in better and deeper.

However, I like one of the 3yos in here and Auxilia is surely better than what we have seen from her thus far.

She looked a useful prospect as a juvenile when shaping very nicely on debut. She then bolted up in a maiden at Naas by five lengths. Auxilia also ran well at Listed level on her final start as a 2yo in soft ground, which could enhance her claims given how the track was riding yesterday.

This season has been poor, though. With two below-par runs over 1m2f and 1m, she needs to get back on track. Whether she has taken a bit of time to come to hand this season I don't know, but she's in top hands, and Ger Lyons has decided to drop her back down in distance.

She's officially rated 98, and we are nowhere near the bottom of her ability at the moment. This looks open and she was a massive price at 17.00 in the Win market last night.

The 18:30 handicap comprises of a few exposed horses, and this is a pretty straightforward pick with Frank Arthur - who looks the one to beat.

He's a 3yo on the upgrade judged on his trio of runs this season. The form of his Gowran Park reappearance looks fine, and he subsequently landed his maiden soon after.

Frank Arthur was pitched into a Premier Handicap last time at the Curragh over 1m and just got picked off by Joseph O'Brien's Fame And Acclaim. It was a fair effort for a young horse, and his jockey Colin Keane did remarkably well to slot him into a handy position from a wide draw in 14 that day. He was still travelling with ease with 3f to go. The handicapper has taken a small swipe with a rise of 3lb to 84, but he is still improving and can run a big race for Lyons.

Back two for the feature Galway mile

The highlight and most attractive betting race of the day is the Colm Quinn BMW Mile Handicap (or Galway Mile in old money), and if we have soft ground, I am really looking forward to seeing Noel Meade's Helvic Dream. This horse has potential and I like his price at around 10.00.

He's a big, strong runner who looked a fine 2yo with heavy ground victories at Roscommon last season. Both of those wins were by fairly big margins and he seemed to love the testing ground he faced. He certainly displayed a turn of foot in both of those. That weapon if ridden handily could be vital in such a hard race as this.

Meade had targeted the big final of the Auction Series at Naas last October but that didn't happen. His two runs this term have been pleasing, and this looks a good test for a potentially classy horse who I feel can cut it at this sort of level.

His return to action at Gowran Park this term was a nice reappearance and the jockey wasn't hard on him, but the different tactics subsequently at Roscommon didn't quite work out. That was over 1m4f at Listed level, so he's back down in distance faced with a draw in 20.

My old favourite Saltonstall is back again for Ado McGuiness, and last year's winner showed enough on his return in the Irish Lincolnshire to show he'll still be a major force in these big races. He got up to take this from stall 14 last term from off the pace, but he's 7lb higher for a repeat bid. He's hugely likeable though.

My other bet will be with McGuinness' other one - Current Option. Back him at 9.00.

He caught the eye over an inadequate 7f last time. He wasn't quite speedy enough and the winner was in a better position anyway. He raced with the hood for the first time on that occasion and that is retained.

The step up to 1m will suit and he's got the look of a handicapper that can land one of these big prizes.