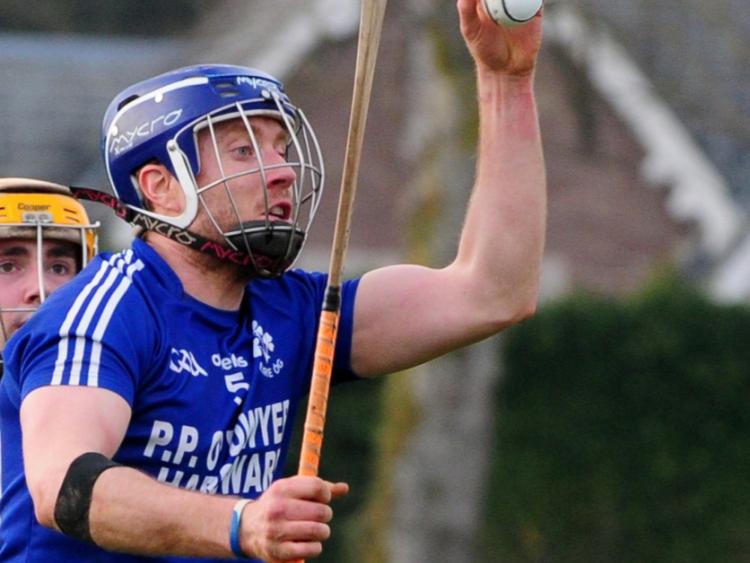 However this was the result that neither team wanted, as it almost puts both of them out of contention to advance to the knockout stages, as only the top team in the group this year will progress.

The Covid-restricted attendance was treated to an entertaining game, where both teams went on the attack at every opportunity, although both sets of forwards were guilty of wayward shooting at times. In the end it took a Shane Leahy goal, with one minute of normal time remaining on the clock, to salvage a point for the town men.

Eire Og attacked the near goal in the first half and Dinny Crosse opened the scoring after three minutes from a placed ball, after an earlier attempt from Darragh Mooney was judged to have drifted wide. Mikey O’Dwyer was posing problems for the Eire Og inside back line and he sent over the equaliser six minutes later. Liam Og O’Dwyer and Donough Leahy exchanged points before Mikey O’Dwyer gave Arravale the lead with twenty minutes gone.

A promising Rovers attack was halted when Shane Leahy was pulled down in the square, resulting in a penalty and ten minutes in the sin bin for Eire Og defender Mikey Bradshaw. Darren Lowry came up from defence, to hit the penalty, but his low shot went outside the upright and wide. This setback didn't appear to affect Arravale, as David Kelly doubled their advantage one minute later when he kicked over from thirty metres.

During the final ten minutes before the break, Rovers failed to capitalise on their numerical advantage as Eire Og hit back through a Dinny Crosse free and a wonderful point, from a tight angle, from Paul Downey, to level the game for the third time at four points each, as the referee called half-time.

The second half opened with a Mikey O’Dwyer point in the first minute, only to be cancelled out at the other end by Seanie Ryan. Paidi O’Dwyer kicked the first of his two points to edge Eire Og back in front. James Hogan, who had been introduced as a second half substitute, equalised with what was the score of the game, with twelve minutes gone. Points from Paidi O’Dwyer and Donough Leahy had the game tied up at seven points each by the twenty first minute.

The final five minutes had the crowd on their toes, as both teams sought out an advantage. Eire Og appeared to have got the break when Dinny Crosse crashed home a penalty to lead by three as the clock ticked down. Rovers, to their credit, never gave up and with a minute of normal time remaining Darren Lowry floated a long high ball into the Eire Og goalmouth, where Shane Leahy outjumped the defenders to punch home the equaliser from close range.

A draw in the end was a fitting result to this lively encounter, where both sides gave everything.

For Arravale, Johnny Ryan and Shane Leahy played tight at the back, while Mikey O’Dwyer and Donough Leahy were always a threat to the Eire Og defence.