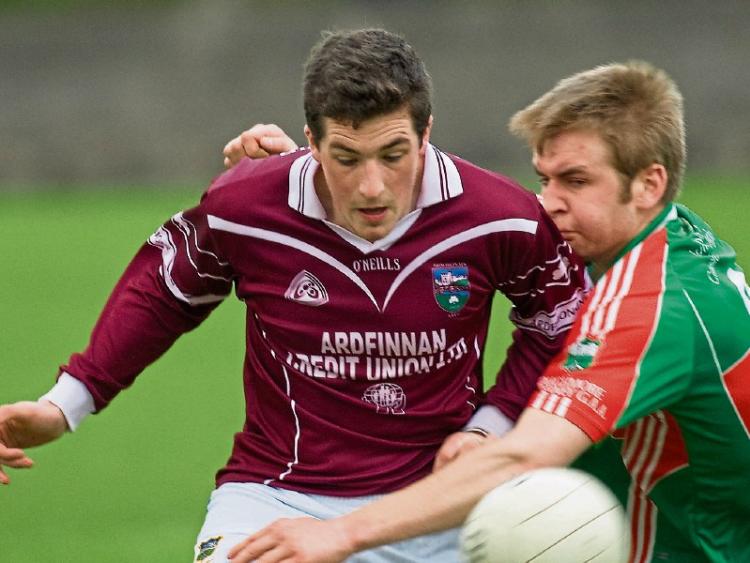 Billy Hewitt (left, seen here in action against Loughmore's John McGrath) will be in the Ardfinnan team to face Ballyporeen in a crunch County Senior Football Championship tie this Sunday

So far so good.

Gaelic football, soccer and hurling matches have been played in the club championships throughout Tipperary for the past two weekends, with everything going pretty much according to plan.

All of the guidelines set down by the government and HSE to prevent the spread of Covid-19 have been followed to allow the games to be staged in as safe a manner as possible.

Social distancing, hand cleansing and cough and sneeze etiquette are among behaviours that have become the new norm, not least in sporting venues as the country attempts to return to some semblance of normality following those frustrating three months of lockdown.

Attendances may still be limited to 200 but players and supporters alike have relished the return to action, with some high-quality games being witnessed across the various codes.

However one recent, post-Covid alteration to the rules of field sports that’s adversely affecting the standard of GAA matches is the water break which, ironically enough, tends to disrupt the natural flow of games.

With no water carriers permitted in either hurling or football, one water break is now taking place between the 15th and 20th minute in each half, at the referee’s discretion.

No one disputes the importance of or necessity for players to stay hydrated during the white heat of battle, especially at this time of the year. But the wisdom of halting play for a minute or thereabouts has to be questioned, although some managers and selectors no doubt welcome the opportunity to issue instructions to their players.

Meanwhile, the attention on the county GAA scene switches back to the football championships this weekend. Holders Clonmel Commercials, Moyle Rovers and Loughmore/Castleiney, the three favourites to lift the O’Dwyer Cup, all won their opening matches in the FBD Insurance county senior championship, and will be hoping to secure victory again this weekend in their search for a semi-final place.