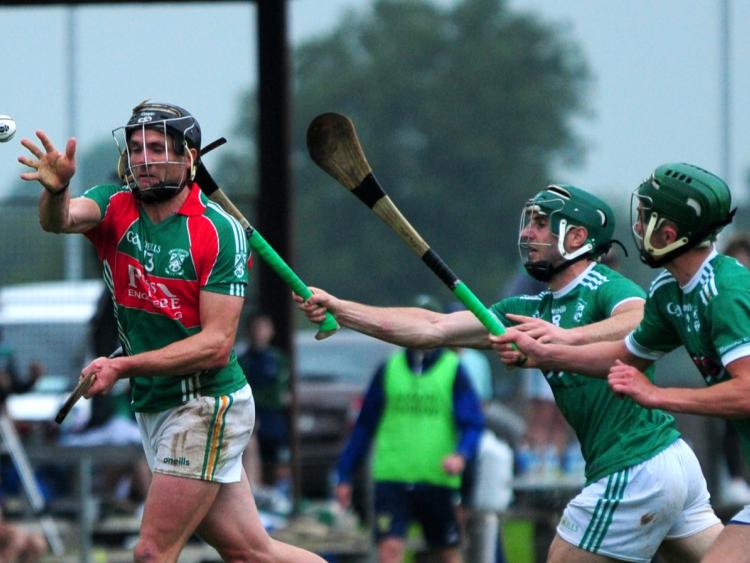 Timmy Hammersley looks to offload the ball to a Clonoulty-Rossmore team mate during Saturday's match against Holycross-Ballycahill. Picture: Eamonn McGee

Clonoulty-Rossmore had to dig deep to salvage a draw against an unfancied Holycross-Ballycahill in the FBD Insurance county senior hurling championship third round at Boherlahan on Saturday, but the point gained sees them top their group.
It took Enda Heffernan’s strike deep in injury time to claim a share of the spoils for Clonoulty but the West lads deserved their draw and move ahead to the quarter- finals in good shape, and with eyes focused on their quest to regain the title last held in
2018.
This was a thriller all the way, a full-blooded contest that gave the restricted attendance lots to shout about. And while Holycross will be somewhat disappointed that they were caught so late after a mighty performance, their consolation is that even had they won they would not have qualified for the county quarter-finals because of other results.
Beaten O'Riain finalists last year, Holycross are a work in progress and their young team, having mixed it with the big boys this year, can look to the future with confidence. They finished behind Clonoulty and Nenagh in their group but have avoided being caught in a relegation battle. That’s progress, and the challenge now for them is to build on what they achieved this year.
Clonoulty went into this game knowing that their place in the quarter final was secure. Joey and John O'Keeffe, key men in their backline, did not start but Joey came in just before the break when Tommy Ryan got injured and John came on for the second half to steady a ship that was rolling precariously. They needed to be at full strength to get a result against
a battling Holycross and even though they left it late, they did enough all through to merit the share of the spoils and finish top of their group.
Clonoulty got off to a cracking start, Stephen Quinn’s 5th minute goal helping them to a 1-3 to no score advantage after 7 minutes. It looked like Holycross were in for a hiding but they settled and with Aidan Stakelum a big threat at full forward they were only three points adrift at the water-break, 0-5 to 1-5.

Holycross had the better of the second quarter. Dara Woods was deadly accurate from frees, as they gained parity at 0-11 to 1-8 by the interval.
Clonoulty’s concern reflected itself in the introduction of John O'Keeffe at half-time and with Dillon Quirke now showing his potential with three points in as many minutes they nosed ahead. Cathal Bourke was off-target for them when Timmy Hammersely blocked down an attempted clearance but Holycross finished the quarter impressively, Aidan Stakelum crowning a fine personal performance with a cracking goal off Jack Skehan’s delivery in the 44th minute. Dara Woods added a point to put Holycross 1-17 to 1-14 clear at the second water break.
With six minutes to go Holycross had extended their lead to five points, 1-20 to 1-15 and a shock win was on the cards but Clonoulty drew on their vast experience to salvage a draw in a hectic finish. Dillon Quirke pointed and then Thomas Butler blasted home a great goal in the 57th minute to leave only a point it.

Holycross backs were to the wall but they looked like they had survived until Enda Heffernan popped up deep in in injury time to shoot the equaliser.
Keeping their unbeaten record intact was important for Clonoulty and this spirited recovery will do much for their confidence. It was never going to be easy against their neighbours but they showed yet again that they have the bottle for a scrap and eke out results in tight situations. With six points from play Dillon Quirke was their top performer but Michael Ryan, Thomas Butler, Stephen Quinn, Enda Heffernan and the O'Keeffes, when they came on, all contributed well to the point gained.
Holycross can look back with satisfaction on this campaign and the challenge for them is to drive on from here. Next up will be the Mid championship and if they can maintain their present momentum they could have a big say in the destination of honours.