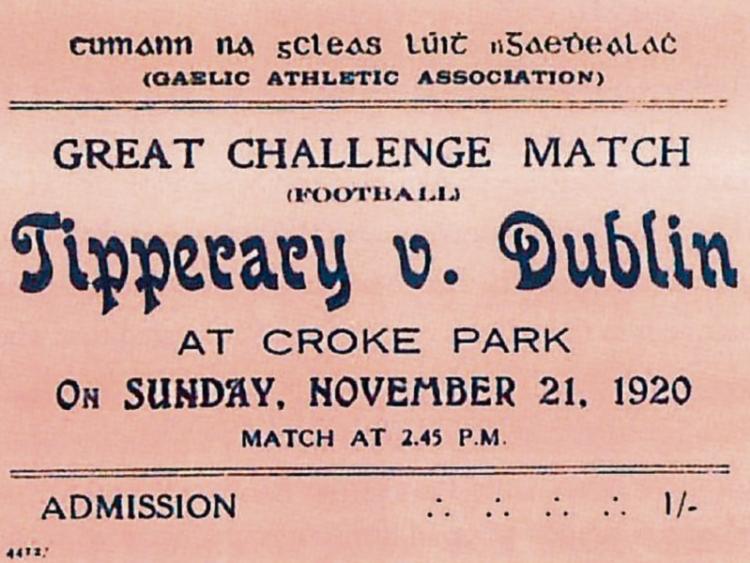 Two Bloody Sunday wreath-laying ceremonies planned for Cahir and Clonmel have been cancelled, but a third ceremony will take place in Fethard this Saturday

Wreath-laying ceremonies planned for Cahir and Clonmel to honour players on the Tipperary Gaelic football team that played in Croke Park on Bloody Sunday 100 years ago have been cancelled.

The cancellations follow the Government’s announcement yesterday of a number of new restrictions aimed at curbing the spread of coronavirus.

However a third ceremony in Fethard is to proceed.

At 3pm on this Saturday, August 22 wreaths will be placed on the graves in Calvary cemetery, Fethard of Frank Scout Butler, the goalkeeper on the Tipperary Bloody Sunday team, and corner-forward Gus McCarthy.

Afterwards a plaque will be unveiled outside Fethard GAA grounds in memory of Frank Scout Butler, Gus McCarthy and Ned O’Shea, the third Fethard player on the Tipp team, and its captain, who is buried in New York.

Former Fethard, Tipperary and Munster player Dinny Burke will deliver the graveside oration while the plaque will be unveiled by another former Fethard and Tipperary player Tony Newport.

A wreath-laying ceremony and plaque-unveiling scheduled for Cahir on this Friday evening to honour Cahir and Tipperary player Jimmy McNamara has been cancelled.

A similar ceremony planned for St. Patrick’s Cemetery in Clonmel on Thursday evening week, August 27 to honour Tommy Powell, another member of the Bloody Sunday team, has also been cancelled.

Tipperary footballer Michael Hogan was among 14 people shot dead when British forces opened fire during the Tipperary/Dublin match on Bloody Sunday, November 21, 1920. A statue of Michael Hogan is to be unveiled in his native Grangemockler in November.

As part of the Government’s new measures announced on Tuesday evening, all outdoor events and gatherings are limited to 15 people, down from 200.

Sporting events will also be played behind closed doors as part of the restrictions that are to continue until September 13 at the earliest.