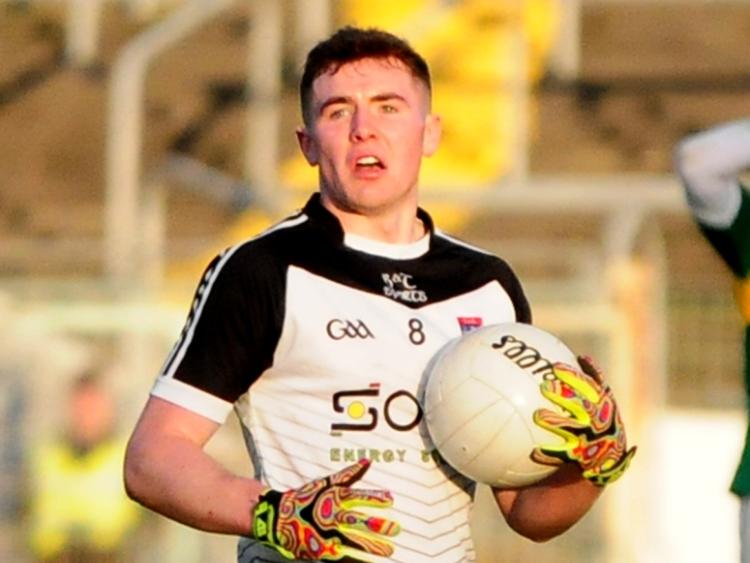 Paddy Cadell was a driving influence for JK Brackens this afternoon

A fine game of football was played out at The Ragg

However, defeat was not a true reflection of the Upperchurch Drombane challenge - they surely deserved a draw in a game in which they made most of the running.

A Colm Stapleton goal, which was helped over the line by Aaron Ryan in the 32nd minute of the first half, was the difference between them as they went to the interval - the 1-4 to 0-6 lead didn't look likely when Brackens kicked four without reply in the first half, but a black card and sin bin for Neil Quinlan changed the picture and Upperchurch Drombane capitalised on the numerical advantage  to  bag 1-2 while he was off.

The Upperchurch lads shot five of the first six scores of the second half to race into a commanding 1-9 to 0-7 lead and Brackens looked to be in deep trouble. They maintained their composure though  and had the deficit back to just a goal by the second water break - Upperchurch hitting the upright, and then having Keith Ryan black carded right on the break.

Again the numericals mattered and now it was the turn of Brackens to come strong with scores from Lorcan Egan (2), and Dean McEnroe (2) to level the game. In between these scores, Neil Quinlan received a second black card and therefore a red card  to again change the complexion.

But, Shane Scully gave Brackens the advantage with a 31st minute score after an initial effort had come off the crossbar. Upperchurch Drombane did all in their power to get an equaliser - Pat Shortt coming into the attack to add pace and threat. However, Shortt was very surprisingly straight red carded within minutes of his arrival of the pitch for a tackle which scarcely seemed a free, never mind a card, and definitely not a red card. The Upperchurch Drombane bench was incensed at the decision while the Brackens bench was as perplexed and left shaking their heads.

Shortt's dismissal ultimately didn't affect the outcome of the game, but once again Upperchurch Drombane felt they should have gotten a point for their efforts.

Credit to Brackens though - they came from the dead to claim the win, eventhough it was not enough to send them forward to the concluding stages of the championship.