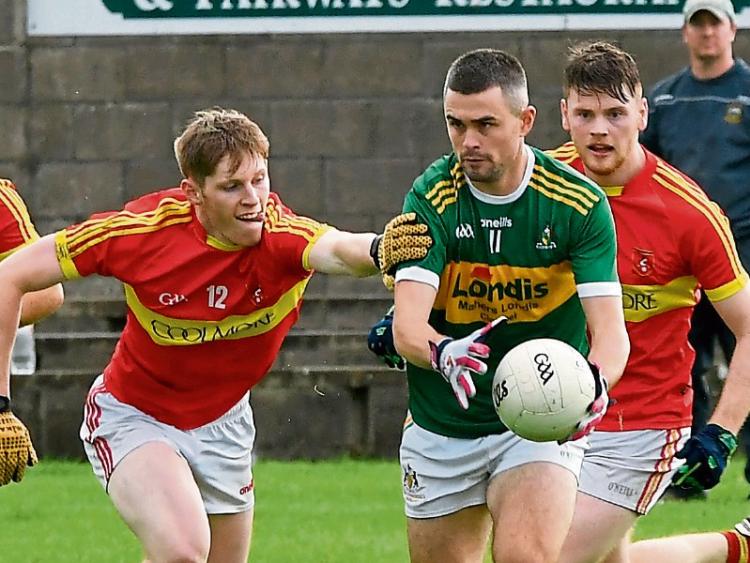 Clonmel Commercials reached the semi-finals of the FBD Insurance county senior football championship with little fuss when they had 16 points to spare over Killenaule in this group three game played at Monroe on Saturday evening.

The Clonmel side rarely got out of second gear in this one-sided contest, but when they did press on the gas they ran Killenaule ragged.

It’s the sixth consecutive year that Commercials have reached the semi-final stage of the competition and their experience showed against an understrength Killenaule side.

Sean O’Connor was the main protagonist, scoring 2-3, and his emergence into the senior ranks has strengthened Commercials further, allowing Michael Quinlivan to play a deeper role in the centre forward role.

And it was the O’Connor-Quinlivan partnership that opened up Killenaule for both of Commercials’ goals.

The first came from a loose Killenaule pass that was caught 35 metres out by Quinlivan. His driving run attracted the attention of three Killenaule defenders but Quinlivan had the vision to pick out the unmarked O’Connor, who showed great composure to calmly pass the ball past Matthew O’Donnell.

That goal came as early as the sixth minute to give Commercials a four-point advantage.

And when O’Connor struck again 20 minutes later, Commercials led by 10. This time Quinlivan found himself in more familiar territory on the edge of the square, back to goal, and when he gathered Colman Kennedy’s driven pass he again set up O’Connor, who found the bottom corner.

By now, Colman and Jack Kennedy had both found their range, sharing four points between them and coupled with a brace of points from O’Connor, Commercials led by 11 points at the halfway stage, Killenaule’s only score coming from Gus Browne.

To their credit, Killenaule attempted to play a more open style in the second period.

With nothing to lose they had a go at Commercials but like so many teams before them they were punished for leaving open spaces.

Jack Kennedy was the first to capitalise when he fired over from distance and he pounced again just two minutes later to add another point.

Sean O’Connor added to his tally from a mark in the 35th minute and it wasn’t long before Michael Quinlivan, Seamus Kennedy and Ryan Lambe added their names to the scoresheet.

Michael Doyle responded with a close-range score for Killenaule and Gus Browne got his second point of the day, but by now the game was well and truly over.

Commercials had done more than enough to easily advance to the knockout stages.

Overall Commercials will be pleased to reach another county semi-final.

However it looks like they will have to play that last four tie without the services of Jason Lonergan, who was absent from this game through injury; and Ian Fahey, who sustained a knee injury against Killenaule.

It’s likely too that they may have to overcome either Moyle Rovers or Loughmore to reach back-to-back finals, the only sides to have beaten them in a county semi-final since a loss to Thomas McDonaghs in 2011.

So. it won’t be straightforward for the Clonmel side but they are many people’s favourites to reach the final.