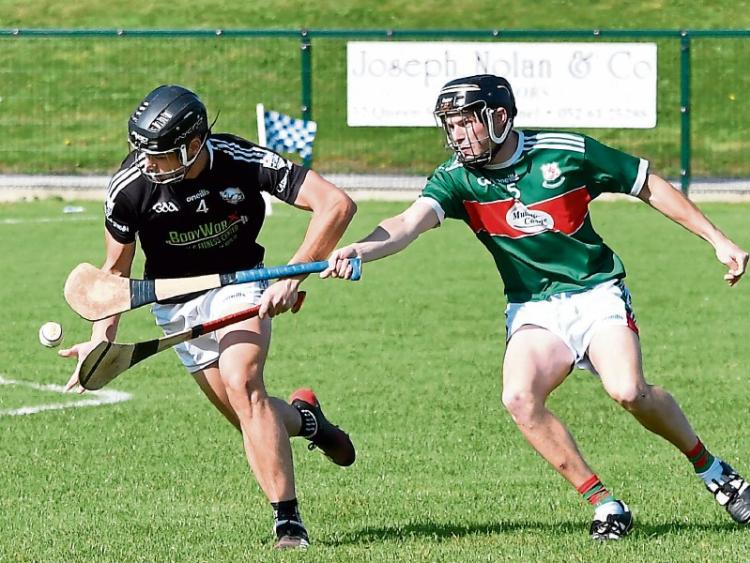 Carrick Swan’s day of atonement finally arrived last Sunday in Clonmel Sportsfield as the disappointment of last year’s south final defeat, and their more recent setback in the Seamus O’Riain Cup quarter-final were finally put to bed with a thrilling extra-time victory over a resolute Mullinahone in the Clonmel Oil south Tipperary senior hurling championship semi-final.

It was a game of the upmost intensity, reminiscent of last year’s final. Swan applied themselves to their task from the outset. Lining out without influential playmaker Eric O’Halloran, they shot into a 0-3 to no score lead.

Mullinahone edged back into the game in nine minutes when Enda Keane opened Kickhams’ account from the stand side.

Sean Curran then pounced on a knockdown to score his side’s second point but the game’s first critical score transpired from the resultant puckout.  Noel Obilor escaped the shackles of Paul Curran and pulled back a brilliant pass to Jamie Holloway, who despatched a low rocket to the back of Alan Walsh’s net.

Dean Waters added another white flag, as Swan settled into a rhythm. Eoin Kelly then kept Mullinahone in touch with a point from a free, but Carrick’s intensity swamped the middle third for the remainder of the half. Aaron Dunne accelerated into the game with great impact, scoring four points from play in a great individual spell.

Sean Curran had a huge point from midfield to stem the black and white tide, but Swan held sway over the scoreboard at the recess, as Eoin Kelly and Danny O’Hanlon cancelled each other out  with another free apiece. At half time it was Carrick Swan 1-9 Mullinahone 0-6.

At the turnaround, the anticipated inevitability of a Mullinahone resurgence became just that, as Kickhams roared into the game. Four unanswered points from Eoin Kelly (2), Colin Shelly and Michael Dunne got them back into the game.

The redeployment of Shelly to midfield proved a tonic, as Mullinahone totally took over during the second half. Swan managed a mere two points in the third quarter and by the time referee Paddy Ivors signalled for the second water break Mullinahone had drawn level through  points from Eoin Kelly, Sean Curran and a magnificent solo effort from Eoin Fennelly.

The final period of regulation time saw Eoin Kelly become more and more prominent. He had two points in-a-row but was guilty of some uncharacteristic wides. O’Hanlon and Kelly once again traded frees as the mercury on the foul-barometer soared, such was the intensity. Then a Danny O’Hanlon stray pass yielded a foul, from which Kelly found the range.

Mullinahone looked like winners but a Danny O’Hanlon free at the end of normal time meant supporters were about to be treated to 20  more minutes.

The opening additional period was contested with no less fervour than the previous 60 minutes. Carrick enhanced their total by three, but Mullinahone’s scorecard prospered by four as the barest of minimums separated two excellent teams.

By now the Shellys, Jack and Colin had asserted great influence and were central to almost all Mullinahone’s attacks, while Carrick’s old stagers Danny O’Hanlon and Kevin Lanigan were displaying great leadership for the Swan.

Jack Shelly and Jamie Holloway maintained the one-point differential, but Carrick broke and raced through the tired lines and fashioned a goal a stupendous quality. O’ Hanlon found Holloway who in turn released Dean Waters, who volleyed home a thundering goal to seize the advantage with endgame approaching.

Jamie Holloway added an important point, placing Swan in the driving seat. When the marauding and fearless Jack Shelly was hauled down 20 metres out from goal, the ensuing free was hammered goal-bound fiercely by Kelly, who was foiled brilliantly by Kieran Lonergan and when the rebound came back his second attempt vainly whistled past the post, as the Mullinahone challenge finally flatlined.

On a day where the appetite for divisional hurling was showcased brilliantly, Swan deserved their victory but found the most obdurate of opponents in Mullinahone, who relinquished their crown after a fierce battle.

Carrick now await the winners of this weekend’s second semi-final between Killenaule and St. Mary’s.