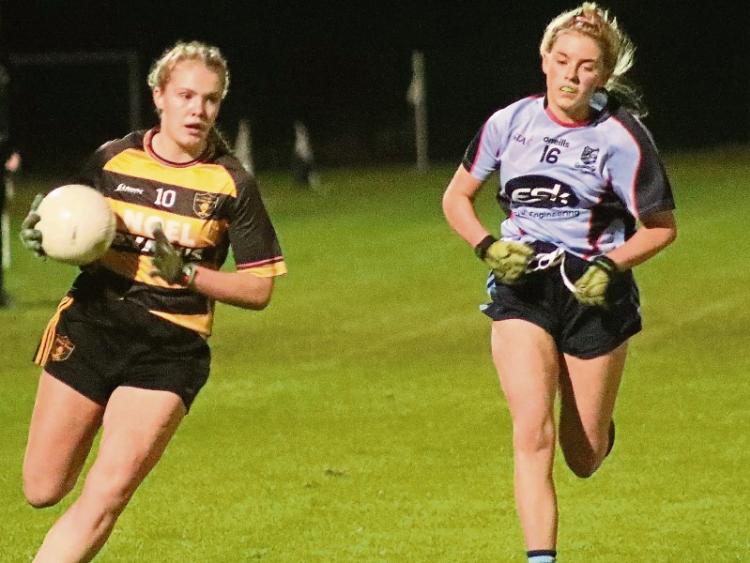 In the second of eight county finals held over the finals weekend in September, Arravale Rovers secured promotion to junior B next year in a thrilling affair under lights in Cappawhite on Friday,  September 25.

A high-scoring game featured ten goals, with seven coming in the opening half. From the throw-in Arravale set the tone, with Kate O’ Connor speeding up the wing to register the first point within 30 seconds, followed by another point from Aisling Redican’s boot to put Arravale two points up within the opening two minutes. Arravale kept the pressure on and were rewarded for their hard work with two goals in ten minutes, one each from Kate O’Connor and Steph Walsh and a second point from Aisling Redican putting them firmly into the lead.

Moyle Rovers, shaken by that poor start, began to settle after a Leah Clancy goal and ended the first quarter all square with a goal each from Bronagh McGrath from a penalty and one from Caroline Quirke, assisted by Kate Moore. After the water break Arravale continued their scoring blitz with two further goals, one each from Ciara Ryan and a second from Kate O’Connor. However Moyle Rovers battled and tacked on five points before the half-time whistle was blown and Arravale’s lead was brought back to within a goal.  The half time score was  Arravale Rovers 4-5 Moyle Rovers 3-5.

Moyle Rovers did not score in the third quarter while Arravale tacked on two points to push out their lead to five points. Entering the final quarter Moyle Rovers were reduced to 14 players when Maureen Hayes was sin- binned. Arravale used their advantage well and put themselves beyond reach with two further goals, one each from captain Aine O’Carroll, who made an inspiring run from midfield and one from Steph Walsh, giving her a personal tally of two goals.  A spirited fight back by Moyle Rovers yielded a goal from Sinead Heffernan but they were unable to land any further scores and it ended 6-9 to 4-5.